Earlier today, CLE Cigar Company announced the impending release of the CLE Azabache – this year’s TAA exclusive offering.  The line will be launched at the annual TAA convention in Puerto Vallarta, Mexico.  Azabache (jet) is a dark glossy type of coal often used in the Cuban culture to produce jewelry.  The cigar is presented as a medium to full bodied maduro that is “delightfully creamy,” and will be available only through TAA member retailers.

“Last year we released the Asylum Nyctophilia at TAA. This year we decided to showcase a cigar under the C.L.E. portfolio. I can’t wait to get there and show or friends and customers what I have been working on this year. ” says Christian Eiroa, founder of C.L.E. Cigar Company.

The CLE Azabache will be have a production run limited to 320, 25-count boxes for each vitola.  The sizes will included 5″ x 50, 6″ x 54, and 6″ x 60.  The line will come with a Mexican maduro wrapper, Honduran binder and a filler blend comprised of Honduran, Nicaraguan, and Peruvian tobaccos.  The cigars will be box pressed and rolled at the CLE Aladino factory in Danli, Honduras.  Each will be wrapped in tissue adorned with both the CLE and TAA logos to showcase their TAA-exclusive availability.

The CLE Azabache is the latest of this year’s offerings from CLE and its client companies.  Other announced products for 2016 include the Asylum 13 Connecticut, as well as the new Asylum 13 toro.  Additionally, CLE is being rebranded and will debut the CLE Prieto and CLE Chele. 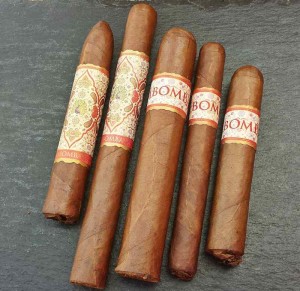 After a successful launch of their Connecticut Classic and Corojo Oscuro lines, MBombay Tobak has announced a new introduction into the marketplace.  The company will soon release a “medium bodied, flavor packed cigar” called the MBombay Habano.  The offering will be a part of their core line portfolio.

“It is our Passion as a Brand to create an enjoyable Experience for cigar smokers of all levels. It is our pleasure to create a medium bodied blend that truly encompasses the complexity and nuances a tasty cigar should provide.” ~ Mel Shah (Owner/Creator)

The new cigar will feature and Ecuadoran Habano wrapper over an Ecuadoran Criollo binder and filler tobacco from Nicaragua and Peru.  It will be available in five vitolas, including a corona, robusto, belicoso, churchill, and gordo.  Suggested retail pricing will range from $8.50 to $12.50, depending on size.

The MBombay Habano is a follow up to the company’s first year introductions listed above.  MBombay supports its retailers by refusing to allow for online sales of their cigars, and provides online marketing coverage for their accounts.  The company reports more than 65 retail accounts after its first year of production, and growth in the U.S. market.  More information can be found at: www.bombaytobak.com. 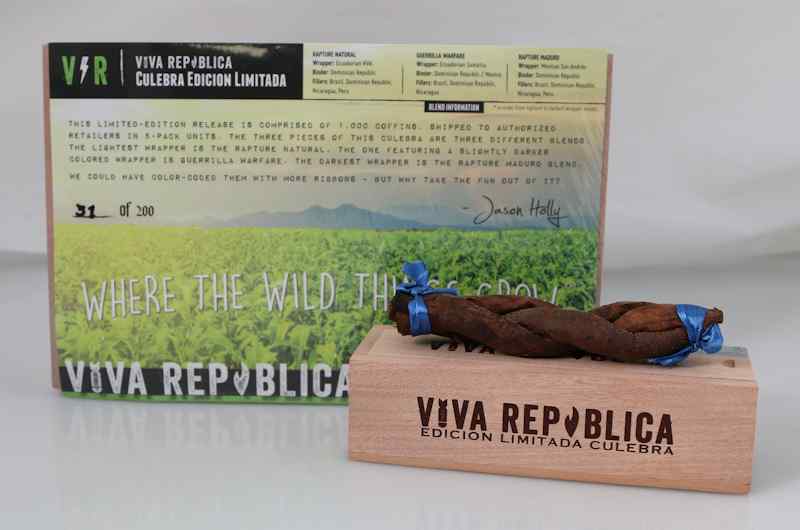 Yesterday, Viva Republica™ announced the impending release of a Limited Edition Culebra.  Only one thousand (1,000) coffins each containing a traditional three-piece culebra have been produced, shipping in retailer 5-packs (5 coffins per pack). The Culebra is comprised of three differing blends, featuring the Company’s Rapture, Rapture Maduro and Guerrilla Warfare brands.

Each of the cigars that comprise the culebra have a length of 5.75,” and 39-ring gauge. Inside each five piece package is a memo that identifies the three components by wrapper shade and discloses the blend breakdown for each cigar.  The details for each cigar are as follows:

“I’ve always been intrigued by and have enjoyed culebras and wanted to use creating one as an opportunity to feature three of our core lines,” said Jason Holly, owner of Viva Republica.

The cigar(s) will officially launch during the DC Tweet Up on Saturday, March 14 at Tobaccology in Manassas, VA from 1:00 pm to 3:00 pm.  The limited run has an MSRP of $18 (excluding applicable local tax).

“Pricing was always a consideration. These are time-consuming to produce. But I wanted to keep value pricing so [more] people would try a culebra,” said Holly. I think their typical cost could be a bit of a consumer barrier.”

Viva Republica is exclusively distributed in the United States by Miami Cigar & Co.