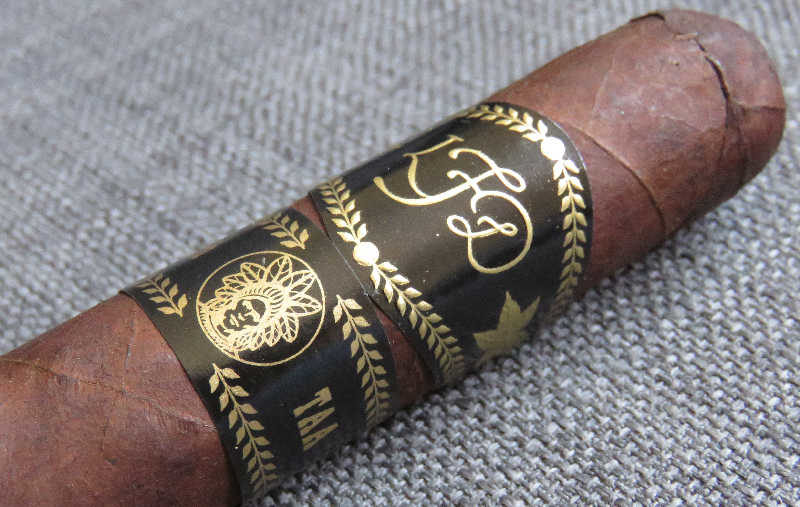 Last year’s (fabled, per Craig) selection process led to the finished product we have before us – the La Flor Dominicana TAA 47th.  It’s a 5.5” x 52 robusto extra that features an Ecuadoran Habano wrapper over Nicaraguan binder and Dominican/Nicaraguan filler mix.  It was available only through TAA member shops, and retailed for about $9 per stick.

The much anticipated…and much maligned…CA Top 25 list is making its rounds for 2016.  If you follow the list, you probably already know that the La Flor Dominicana Andalusian Bull topped it at number 1.  I (Kip) haven’t personally smoked this cigar yet, but I have read a bit about it.  In fact, quite a few of the things I read deemed it as being uncharacteristic of the typical LFD portfolio.  The anecdotal  trend I am seeing is folks saying it’s not as potent as the company’s standard fare, with perhaps more of a spicy profile.  I suppose I’ll have to track them down, because nicotine-heavy blends has been one of my personal reasons I avoid the brand most of the time (although there are a few I will reach for on occasion, like the Airbender).  I’d love to hear what some of our listeners think of it – because this list is often polarizing for the magazine’s readership, and I’m interested to see what Johnny-on-the-street has to say about the cigar.  The 6.5” figurado retails for about $15, and features a Corojo-seed Ecuador Habano wrapper over a blend of Dominican Criollo ’98, an undefined hybrid, and some Pelo d’Oro.

Lots of legislative news since our last show.  First, a very brief update in the form of a date.  July 28, 2017.  This is the date that the joint CRA//IPCPR//CAA lawsuit will have its day in court.  We’ve covered this in recent shows in terms of its initial filing and the FDA’s response.  We’re going to have to wait a few more months before anything really starts to move with it….

Moving along into the second bit of legislative info, the FDA has now alleged that several companies are falsely marketing cigarettes as “Little Cigars.”  Swisher is the only company in the list that I recognize having a tie to our standard roster of cigar companies, with their past premium division and current ownership of Drew Estate.  Frankly, despite my (Kip’s) typical displeasure with the FDA’s asserted long arm, I’m kinda onboard with this reach.  Similar loophole wrangling led to some portion of the mess we’re in today (i.e. roll-your-own tobacco being marketed as pipe tobacco in FL, etc.).  If these are cigarettes, call them cigarettes.  THIS is why we need a solid definition that differentiates premium cigars from other types of tobacco products.  I’m not alleging Swisher did this, but there were a number of cigarette makers in 2009 that simply changed the color of their paper wrapper to brown and called them “little cigars” to manoeuvre the tax framework.  These things are sized like cigarettes, have similar composition, and are packaged much alike…

Representative Mark Meadows (NC, Rep.) has compiled and presented a list of over 200 regulations that could beneficially be repealed by incoming President Trump.  One of these regulations is the FDA’s claim on regulating tobacco products – specifically premium cigars.  The list specifically notes the fear of the overwhelming pre-review process that the industry now faces.  Story on Cigar Coop

Tatuaje Skinny Monsters – I’ve begun smoking through these as I get the chance.  I’m keeping some notes on each and will post them up once I’m through the lineup.  So far, I think the Mummy has been my favorite…which is peculiar, because I believe it has been my least favorite in the full size offerings.

Earlier today, CLE Cigar Company announced the impending release of the CLE Azabache – this year’s TAA exclusive offering.  The line will be launched at the annual TAA convention in Puerto Vallarta, Mexico.  Azabache (jet) is a dark glossy type of coal often used in the Cuban culture to produce jewelry.  The cigar is presented as a medium to full bodied maduro that is “delightfully creamy,” and will be available only through TAA member retailers.

“Last year we released the Asylum Nyctophilia at TAA. This year we decided to showcase a cigar under the C.L.E. portfolio. I can’t wait to get there and show or friends and customers what I have been working on this year. ” says Christian Eiroa, founder of C.L.E. Cigar Company.

The CLE Azabache will be have a production run limited to 320, 25-count boxes for each vitola.  The sizes will included 5″ x 50, 6″ x 54, and 6″ x 60.  The line will come with a Mexican maduro wrapper, Honduran binder and a filler blend comprised of Honduran, Nicaraguan, and Peruvian tobaccos.  The cigars will be box pressed and rolled at the CLE Aladino factory in Danli, Honduras.  Each will be wrapped in tissue adorned with both the CLE and TAA logos to showcase their TAA-exclusive availability.

The CLE Azabache is the latest of this year’s offerings from CLE and its client companies.  Other announced products for 2016 include the Asylum 13 Connecticut, as well as the new Asylum 13 toro.  Additionally, CLE is being rebranded and will debut the CLE Prieto and CLE Chele.