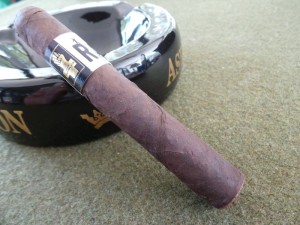 I stopped by the Viva Republica booth at IPCPR not really knowing much of the company.  After speaking with them, and doing a bit of browsing around their website, it turns out the company’s origin lies in a partnership owner Jason Holly has built with La Aurora, who is producing the cigars for him.  Making their second IPCPR appearance this year, they are introducing two new offerings into their stable – a maduro version of their existing “Rapture” series, and the “Guerrilla Warfare,” a 4″X41 petit corona containing a 5-country blend of tobaccos.  The Rapture Maduro will be available in the same four vitolas as the original – Perdition 4.5″X50, Revel 5.5″X54, Exodus 6.25″X52, Harasha 6″X58, with MSRP ranging from $7.80-9.00.  Today, I’m smoking the Revel (MSRP $8.40), available in boxes of 20.  This is the second I’ve smoked from the line, provided by Viva Republica.  It carries a Mexican San Andres wrapper, covering a DR Corojo Ligero-bound filler blend from Nicaragua, Brazil, Peru, and the Dominican Republic.

In giving the Revel a cursory exam, the depth and consistency of color in the deep, dark-brown wrapper is striking.  The wrapper has just enough oil to provide a silky feel, but not so much as to be moist to the touch.  It is moderately veiny, with just a couple of significant veins present in the leaf.  I don’t find any soft/hard spots; in fact, the density is very uniform throughout the length of the cigar.  Before lighting, I find the resistance to be in the sweet spot for my personal tastes.  It is slightly deliberate but free.  The prelight aroma is of sweet hay along the wrapper, and a bit “darker” at the foot – with some raisin-like flavors shining through. 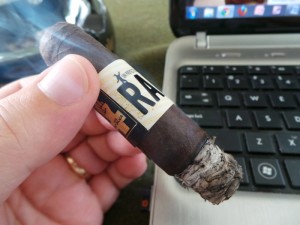 At first light, the initial puffs produce a caramel-reminiscent sweetness; almost – but not quite – sweetened cocoa, tempered with the slightest bit of spice through the nose; a full retrohale showcases this spice a bit more – but it’s never dominant.  By the end of the first inch, what spice was present earlier has almost completely dissipated; it begins to transition into a hardwood forest-floor earthiness.  It reminds me of the aroma from a forest after a steady rain.  The burn has been quite well behaved, providing a mottled gray and white ash with a flaky appearance but solid in character.  It is releasing voluminous amounts of mouth-coating smoke.  This smoke really sticks to the palate, providing a nice, long-lasting oaken finish.

Going into the middle portion of the cigar, the Rapture Maduro is fairly uneventful as far as flavor changes are concerned.  It remains predominantly framed by the pleasant earthiness mentioned in the first segment of smoking.  But, in all honesty, if it’s already a pleasant experience, why would you want to go changing?  Nearing the final third, I do find it becoming more woodsy and less “forest-floor” in character.  This lighter, more woodsy earthiness becomes the predominant flavor family during the final third.  The strength also picks up a notch. In fact, a couple of notches.  It never becomes overpowering, but the potency will become noticeably stronger during the final stretch. 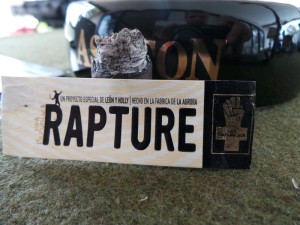 If you read The Cigarmy with any regularity, you have likely noted that I tend to publish reviews for cigars that make an impression on me as standouts from more pedestrian fare.  The Viva Republica Rapture Maduro is no exception.  Having developed an affinity for San Andres wrapper leaf over the past 18 or so months, I have come to hold great expectations when I see it listed in blend details, and the Rapture Maduro did not disappoint.  The early sweetness and subsequent earthy tone of the cigar were very enjoyable, and with near perfect construction I found the experience to be remarkable.  While visiting the Viva Republica booth, an emphasis was made on the relationship between Jason Holly and the folks at La Aurora, and how he has near carte-blanche access to component leaf for blending.  This carries through in the final product.  I would never have identified this as a La Aurora cigar had it been an unbanded stick.  I can only assume that is due to the personal preferences and hands-on presence in the blending process afforded to Jason Holly and the Viva Republica folks, rather than simply ordering up some vague notion of what they would like to have in a cigar and taking what is delivered.  They have done an excellent job with this line, and I can only give it the highest recommendation.  I foresee it becoming a regular part of my San Andres rotation, when in the mood for it.  For my tastes, it is worthy of a box purchase, and I hope to see it on my local shop’s shelves soon…