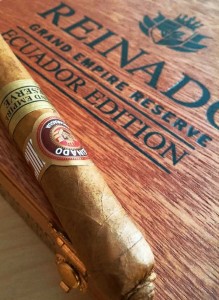 The dimensions of the new cigar are 6″ X 38, and it will be topped off by an ornate pigtail cap.  It will be packaged in boxes of 10 cigars and retail for $8.99 per cigar.  The GER Ecuador Edition will be available from Alliance Cigar, REINADO, and fine tobacconists throughout the United States.  Release is slated for July 20, 2014 at the IPCPR Tradeshow in Las Vegas, NV.  REINADO will be in Booth #2014.

“With the explosive consumption of our exceptionally rated Grand Empire Reserve line, we sought to introduce a complementary profile that delivers a rich, toasty, and distinctive flavor for smokers seeking a medium strength experience…. After nearly a year in development, we believe this aged Ecuadorian Connecticut wrapper combined with the Grand Empire Reserve blend offers a perfect balance for sophisticated palates.” said Antonio Lam, owner of REINADO Cigars.

“We are excited to carry REINADO’s new Petit Lancero and are confident this premium cigar will be highly appreciated by a wide range of discerning smokers,” said Tom Sullivan, Founder of Alliance Cigar (Distributor of REINADO Cigars).