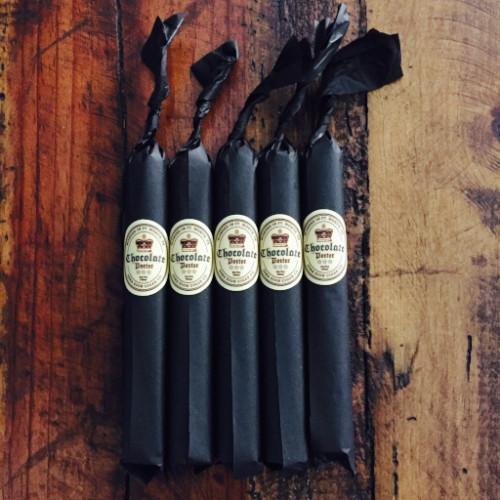 Kip – Ezra Zion Chocolate Porter:  This was a limited run released by the guys at Ezra Zion a couple months ago.  It features a San Andres wrapper, and had a very limited production of 645 cigars.  The release promises deep, roasty flavors coupled with some vanilla, coffee bean and licorice. Also promises not to nuke your palate with strong tobaccos….let’s give it a whirl.
Craig – ….did not write his notes….

There are *tons* of new cigars being announced leading up to IPCPR…but woefully few details to be honest. Sure, some are forthcoming. But it seems more than ever that cigar makers are reserving specifics until the show.

Oliva has been acquired by J. Cortes…

In addition to the already-regular-production Tatuaje Black PC, a few new sizes are now going to be available full time: Petit Robusto (4 x 50), Corona Gorda (5 5/8 x 46), Cazador (6 3/8 x 43) and Gran Toro (6 1/2 x 52). I had the chance to smoke the Petit Robusto this week, and rather enjoyed it. I find these not to be too radically different by vitola. They’ve done a good job of tweaking the blend to retain its character in all the various expressions. I do dig that CG as my personal favorite size, though…

Don Carlos Personal Reserve
Undercrown Robusto
I picked up – but have not yet smoked – the Tat TAA LE for 2016, and the Crowned Heads Las Calaveras 2016. I’ll report back ASAP.

Thank you for contacting me to express your support for H.R. 662, the Traditional Cigar Manufacturing and Small Business Jobs Preservation Act. I appreciate hearing from you.

H.R. 662 would statutorily exempt cigars from the Family Smoking Prevention and Tobacco Control Act (TCA). The TCA granted the Food and Drug Administration (FDA) the authority to deem all tobacco products under its authority. While cigars are considered tobacco products, the existing law does not explicitly mention cigars. The Food and Drug Administration has issued a proposed rule deeming tobacco products under its jurisdiction. The FDA proposed two alternatives for the treatment of cigars – one option would make all cigars subject to FDA jurisdiction and the other option would specifically exclude cigars designated as “premium cigars” from FDA jurisdiction. The FDA accepted public comment on these two options and is currently reviewing those comments. I will closely follow this process.

While I appreciate your concerns about the proposed regulations and will work to minimize the impact of the law on small businesses, I support FDA’s authority to regulate cigars as needed to protect and promote public health. I oppose H.R. 662because there are serious health risks associated with cigar smoking, and I believe people should be made aware of them. I am committed to warning people about the health consequences associated with cigars, and I am particularly concerned with preventing teenagers from using tobacco products.

Although we disagree on this issue, I appreciate hearing from you. Please do not hesitate to contact me whenever I may be of assistance.

I am a new to CCs … and that has been awesome.

Have been fly fishing the St Joe and Coeur d’Alene rivers lately, the Westslope Cutthroat biting!