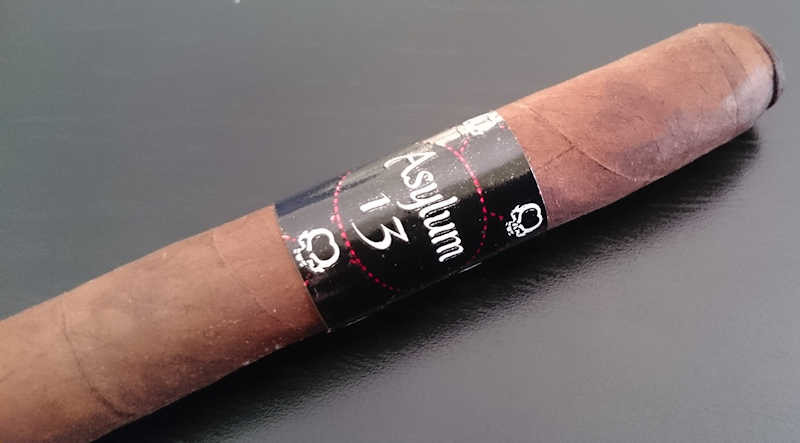 The singular oddball in the Asylum 13 lineup, tonight’s cigar is the Asylum 99 Problems – a 7” x 38 lancero standing in stark contrast to the rest of the line – which typically runs in oversized vitolas.  The cigar is a Nicaraguan puro, although it is manufactured in Christian Eiroa’s “El Aladino” factory in Honduras.  The story says owner Tom Lazuka asked Christian Eiroa how many lanceros would fit in an Ogre box – and the answer was 99.  Hence, the name.  The cigar was produced in limited quantity (500 boxes of 99), and retailed around the $7 mark.

Casa Fernandez has expanded the JFR line…and it’s not in a behemoth ring!  It’s a 7” x 50 churchill, and will be made at the CF (TABSA) factory in Estelí.  It features an untrimmed, shaggy foot and will retail around $8.  Should be shipping this week.

In our final of these updates this year, Quesada has released the last allotment of the España petit belicoso.  Rather than the typical singular box of 100 to a selected retailer, TWO were sent out for December…Mickey Blake’s in Connecticut and Tobacco Plaza in New York.

Right on time with our recently begun semi-vertical tasting of ER’s, two new ones are coming down the pike:

The La Escepcion is being expanded with a second size, as an ER for Italy.  It comes in a 5” x 48, and will retail for the equivalent of just over $16USD….but to get them you’ll have to go to Italy or know someone who is

There’s also a new French ER, in the form of the Quai d’Orsay Robusto Diplomatico.  It’s also in a 5” x 48 vitola, will retail for just under a $14USD equivalent.

Victor Nicholas, of Chogui, announced this week that he’ll be adding another vitola to the Dos77 lineup – the “longsdale” at 6.5” x 46….same blend as the “rogusto,” and shipping in Jan/Feb 2016.

For reasons that aren’t all entirely clear to me, the FDA has reopened a comment period for their upcoming proposed regulations concerning cigars and other tobacco products.  You can make your comments through December 30th…so get on it.

Warped La Colmena #36 – A slighter Laguito #2, this 6×36 is a powerhouse! It’s sharp & flavorful with lots of smoke production & a terrific draw. There’s a lot of marketing hype surrounding these but the cigar stands for itself. It’s In your face enough to please seasoned smokers but approachable enough to slyly make a newby green. I enjoy the mild sweetness in the first third and the blossoming depth as it progresses. A slight room aroma of pot was a distraction. This was the worst part of the experience for me.

Outlaw Cigars Gunslinger “Drifter” – another AJF produced stick…but I didn’t find it typical.  You can pick out AJF’s signature here & there, but it was more sedate and lacked the “bite” that I often find in his blends.  I really enjoyed it – lots of nuttiness throughout, earthiness in the middlegrounds.  Flawless construction.  Dig it.

In the next episode (132), we will be smoking the Bolivar Libertador ER Francia.  So come by Friday night and hang out with us in the chatroom during the show.  If you would like to contact us in the meantime, you can reach us via the Contact Page or the following emails:[email protected] or [email protected]  Please feel free to drop us a line if you have any questions you’d like answered, comments to make…or even compliments and complaints.  We love to get your emails!  Also, remember you can always go back and listen to previous episodes, which can be found in the Half Ashed Archive.  You can download this week’s audio directly below (right-click “Download” and save), find us on iTunes, or subscribe with any podcast app at our RSS Feed.  Video, as always, will be available at the Half Ashed YouTube Channel.