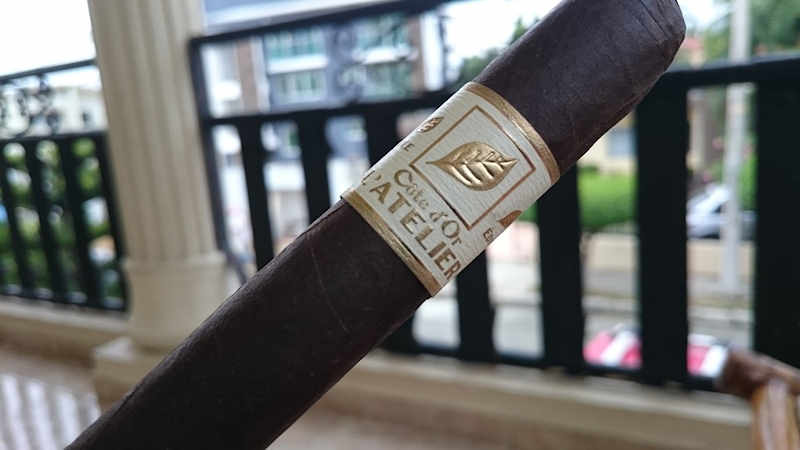 The L’Atelier Cote d’Or debuted in April ‘15, as a special limited release.  It was produced by My Father for the company, and features a small amount of Pelo de Oro, an Ecuadoran Sancti Spiritus wrapper, and an all-Nicaraguan binder/filler combination.  Total production for the cigar was limited to about 21,000 cigars, packaged in boxes of ten and retailed for about $16 per stick.  It measures 7”x47.

In celebration of Carlos Fuente Sr.’s 80th birthday, Fuente is releasing the famed “Senior Blend” Don Carlos to the public.  Previously, it was hard to come by outside of a few events or from a family members’ hand.  It is a tweaked version of the regular production Don Carlos blend, and will be available in two vitolas – a 5×50 robusto ($14) and the “Eye of the Shark,” a box pressed belicoso measuring 5.75” x 52 ($11.95).  The robusto is all Dominican internally, with a Cameroon wrapper – while the blend details for the Eye of the Shark have not been revealed.  Cigar Aficionado has mistakenly reported that this is the 30th anniversary of the Don Carlos line….however, the series came out in 1976 and celebrated with the 30th Anniversary blend in 2006….

Hammer & Sickle, a cigar line with which I’m only vaguely familiar, is releasing a special “Peat-fired” cigar called the Caleanoch 25.  I understand some of the leaf is fire cured like others we’ve seen in the past – with one change.  Rather than various hardwoods being used, peat will be burned during the curing process.  It will feature an Ecuadoran CT wrapper over Dominican corojo binder and Dominican fillers.  Initially, the 25 will have about 25% peat-fired leaf in the filler blend – but, subsequent releases will have 50 and 75%, and be renamed respectively.  It will be available in a single 6”x50 vitola and retailer for $12.50.

Cubanacan Eastern Sales Manager and friend of Half Ashed Nate McIntyre is launching his own line of cigars, called Percy Ray Cigars.  It will be a limited annual release, produced by Cubanacan in their Nicaraguan factory, with the first release coming in a batch of about 800 boxes.  The name of the line is a tribute to McIntyre’s grandfather, to whom Nate attributes his work ethic and values.

Chogui, a line currently only available in the DR, is coming to the US.  I had the chance to sit down at a Santiago cigar shop with Victor Nicolas last week, and he tells me he’ll soon be shipping several thousand cigars to the states.  They will be from his second offering, Dos77 (which has an interesting backstory for that name), and were rolled in August 2014.  I am trying to catch up with him at the factory this upcoming week when he returns to Santiago and check out his next project….I have to tell you, though, the Dos77 is probably the most refreshing new cigar I’ve had since moving to the DR.

Reynaldo Corona Gorda 11/14 – Gift from Zedman – An alluring mild/medium cigar. Slightly tannic & tart but with a terrific pseudo-cocoa undertone. It was sweet and difficult to describe. The burn was perfect, even while driving, and smoking time was nearly 90 minutes

Southern Draw Kudzu – AJ Fernandez through and through. Nicaragua sweet spice. Dusty & full bodied. Strength was there but not overpowering. The palate pollution was a bit high but trading swigs of water and puffs kept it at bay. Very very enjoyable if you like the style.

Arturo Fuente Destino al Siglo – Lots here. Not all of it is good.

In the next episode (128), we will be smoking one of Craig’s selections, the Room101 Serie SA.  So come by Friday night and hang out with us in the chatroom during the show.  If you would like to contact us in the meantime, you can reach us via the Contact Page or the following emails: [email protected] or [email protected] Please feel free to drop us a line if you have any questions you’d like answered, comments to make…or even compliments and complaints.  We love to get your emails!  Also, remember you can always go back and listen to previous episodes, which can be found in the Half Ashed Archive.  You can download this week’s audio directly below (right-click “Download” and save), find us on iTunes, or subscribe with any podcast app at our RSS Feed.  Video, as always, will be available at the Half Ashed YouTube Channel.