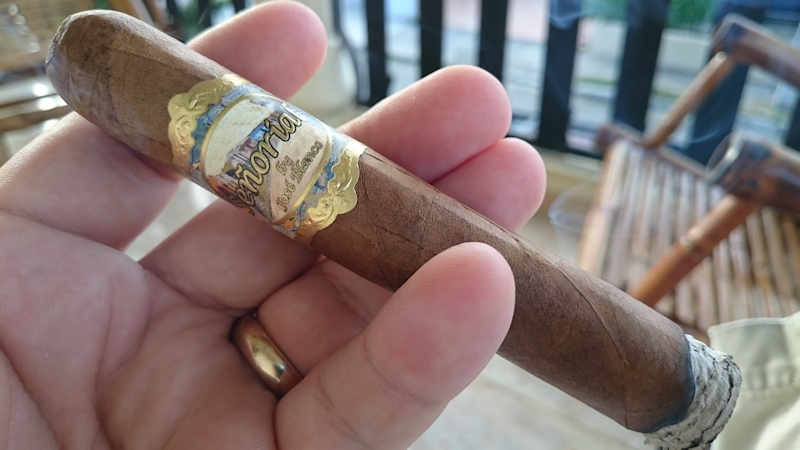 Manufactured for José Blanco at Tabacalera La Palma by Jochi Blanco, the Señorial is the first line of cigars to be released by Blanco under his company, Las Cumbres Tabaco. Tonight’s vitola is the Paco Robusto, measuring 5-¼” X 52.  It has an Ecuadoran Habano wrapper over an Estelian Binder and Dominican Piloto Cubano & Corojo filler leaves. The cigar comes across with mostly “hard” flavors of wood, slight earth, a spicy sweetness (more akin to hot cinnamon spice than baking) and a minimally salty flavor at the finish.  Other available vitolas include:

Chogui, a brand mentioned by Skip Martin as a favored new cigar when he visited the Dominican Republic, has released a new line – the Dos77.  There’s a story behind that name of the 277th (of 300) box of the company’s original line being lost in transit to Santo Domingo.  The company is not distributed outside the Dominican Republic, but I’m working on tracking down a few to possibly get into the rotation.  They’re produced in Tamboril, which is only a few miles from my house…. the Dos77 is produced in a single 5×52 vitola called a rogusto (robusto / gusto), and features a Dominican wrapper over a criollo 98 binder and corojo fillers (DR puro).  $7 apiece in boxes of 16; initial run of 300 boxes, with upwards of 25k more on the way

General announced during IPCPR that there will be a forthcoming Margaritaville brand from CAO.  They will produce a piña colada flavored offering called Margaritaville (cameroon over DR/DR) and a non-flavored, traditional cigar called Havana Daydreamin’ (Ecuadoran Connecticut over Nicaraguan fillers).  Pricing across the lines will run from $5-7.

Glory be!  illusione will be releasing a 7×40 lancero in the Fume D’Amour line.  This line is still probably my very favorite cigar from the past 12 months.  I’m fresh out, but still deeply in love with ‘em.  It, like its other Fd’A brethren, will be a Nicaraguan puro produced via Casa Fernandez.  No MSRP as of yet…

In an interesting move, Eddie Ortega will be taking over the sales department for Quality Importers per a story by Cigar Coop.  Quality Importers is primarily a distribution company in S. FL, and will also take over distribution for Ortega Cigars.  I’m anxious to see how this shakes out.  Things have been fairly quiet in the Ortega camp for quite some time…although Eddie has revamped his website to reflect the integration with QI, stating that “Ortega Is Now Part Of Quality Importers Family Of Brands.”  Not sure what this means in terms of ownership, etc.  Time will tell…

In local news, InTabaco (the Dominican tobacco authorities) burned up 2221 boxes of fake cigars collected from tourist areas throughout the country.  This was apparently a “crackdown,” but less than a week later I witnessed fakes being sold up and down the beaches on the northern coast….

In recent days, I have slipped into a routine of smoking those cigars with which I moved to the DR in large supply.  There are a handful of brands in that number, but the two I have been reaching for of late are Sam Leccia’s Luchador and My Father’s Flor de las Antillas.  I love these two blends, but have to admit it’s time to acclimate a bit more and re-widen my horizons.  In fact, as much as I love Nicaraguan tobacco, I suddenly have a much higher interest in Dominican offerings.  I think it’s time to dabble a bit more in my local produce….

In the next episode (122), we will be smoking the illusione ECCJ 20th.  So come by Friday night and hang out with us in the chatroom during the show.  If you would like to contact us in the meantime, you can reach us via the Contact Page or the following emails: [email protected] [email protected] Please feel free to drop us a line if you have any questions you’d like answered, comments to make…or even compliments and complaints.  We love to get your emails!  Also, remember you can always go back and listen to previous episodes, which can be found in the Half Ashed Archive.  You can download this week’s audio directly below (right-click “Download” and save), find us on iTunes, or subscribe with any podcast app at our RSS Feed.  Video, as always, will be available at the Half Ashed YouTube Channel.