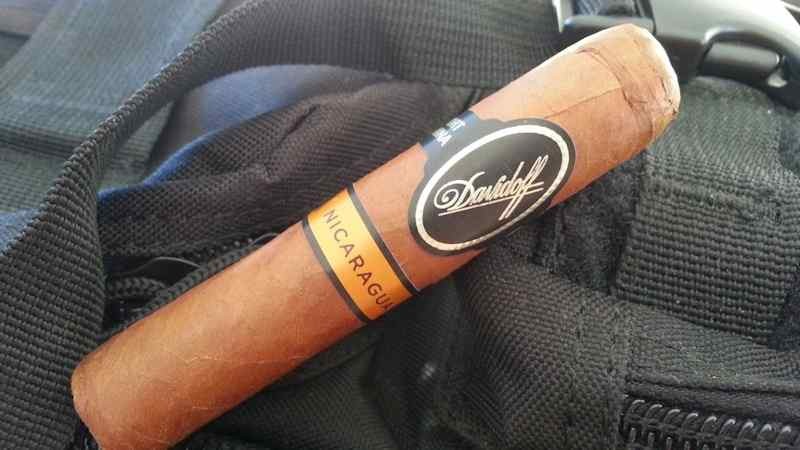 I’m joined this week by longtime friend of the show and former Dogwatch Cigar Radio cohost Dale Roush.  A huge thanks to Dale for sitting in with me and catching up.  We’re smoking the Davidoff Nicaragua Short Corona, a 3.75″ x 46 beauty featuring a 10 year old Habano seed Rosado wrapper, and Nicaraguan binder/fillers.  This line debuted in summer of 2013, and retails for about $9.90 depending on local tax situation.  Tune in to get our thoughts on the cigar, as well as a chance to see what Dale has been up to and a bit of cigar news!

In a topic we talked briefly about last week as an outlying possibility for a developing trend, Camacho has announced their contribution to the world of barrel-aged cigars.  The Camacho American Barrel Aged will feature bourbon barrel-aged corojo as a core component.  It will also come with a 5-year old American broadleaf wrapper.  In fact, it almost exclusively utilizes American grown tobacco, including the broadleaf wrapper, binder and filler – including a maduro filler tobacco from Pennsylvania.  A single leaf of six year old bourbon barrel aged Corojo was added to the recipe.  They are promoting a national event tour to launch the line, beginning in Orlando June 8th and ending up at Tampa Humidor December 19th.  It will be shipping June 15th and retail for $10-12 per cigar.  I posted a story about it on the website with full tour schedule.

United Cigar, who we’ve spoken of several times in the past 2 months, is partnering with Selected Tobacco to extend the Byron line by two vitolas.  Both cigars are the largest Byron vitolas to date, and as a result each blend is tweaked a bit with a higher priming to maintain the strength and flavor required to match the larger ring gauge format.  The packaging has also been revamped and will include individual humitubes with the cigars.  MSRP has been set at a whopping $33 a stick.  Here are the details on the cigars.  See full story posted earlier.

The Serie Siglo XIX, was blended by Nelson Alfonso with a goal of best representing Cuban Cigars of the 19th Century is now available in a 6 x 56, known as the Grand Poemas.

The Serie Siglo XX – also blended by Nelson Alfonso – aims at representing Cuban Cigars of the 20th Century, and is also available in a 6 x 56 format known as Habanero.

A few weeks ago we reported on an upcoming event-only offering from Crowned Heads…just as an update, the name has changed from “Snake Oil” to “Blood Medicine.”  Turns out, Kendall Culbertson of Outlaw Cigar Co. owns the trademark for Snake Oil.  So, to maintain the peace, the Crowned Heads folks opted to just change the name.  Other details remain the same: it’s a 5.5” x 48 “super corona”; Ecuador Habano wrapper over Nicaraguan binder and filler.  It will not be available for stand-alone purchase, and will come through event special purchases.

The still-recovering Skip Martin is closing in on shipping the much-anticipated release of RoMa Craft’s Neanderthal this upcoming week.  The line carries a Mexican San Andrés wrapper, Connecticut broadleaf binder and fillers that include tobacco from Condega, Estelí, Jalapa and Pueblo Nuevo from Nicaragua; Dominican olor ligero and Pennsylvania “Green River Sucker One” double ligero. The line will be distributed initially in a single 5” x 52/58 vitola, but will also include extensions soon.  A shop exclusive/event 4.25” x 52 vitola will also be available soon for Riverside Cigar Shop in Indiana and Serious Cigars in TX.  These two sizes will retail for $12 and $9 respectively.

While cruising the social media nether regions today, I noticed an article halfwheel posted up that they’d found in the Cañon City Daily Record from Dale’s home state of Colorado.  It appears some folks in Cañon City CO are shooting for a ban on outdoor smoking in the Central Business District of the city.  The claim is that smokers spilling out of buildings (due to an indoor ban) are giving the area an inconvenient image.  Councilman James Characky, Jr. said. “I want to create an image of healthy, vibrant people, not an image of cigarette smoking, beer drinkers.”  The mayor has proposed limiting the ban to Main Street alone, rather than the entire district.

Next episode (114) we will be featuring the Unbanded #024 from zedman.  So come by Half Ashed Friday night at 9:30pm EST and hang out with us in the chatroom during the show.  If you would like to contact us in the meantime, you can reach us via the Contact Page or the following emails:[email protected] or [email protected] Please feel free to drop us a line if you have any questions you’d like answered, comments to make…or even compliments and complaints.  We love to get your emails!  Also, remember you can always go back and listen to previous episodes, which can be found in the Half Ashed Archive.  You can download this week’s audio directly below (right-click “Download” and save), find us on iTunes, or subscribe with any podcast app at our RSS Feed.  Video, as always, will be available at the Half Ashed YouTube Channel.

P.S. – If you have unbanded suggestions or contributions, you can get those to us by sending an email to [email protected]  This email address goes directly to my wife, so you can simply suggest an unbanded cigar for her to source, or send [email protected] if you have something you’d like to send in.  I will provide an address to send them.  Thanks!