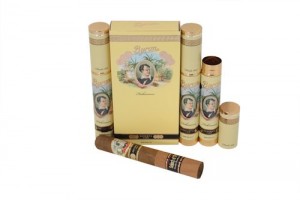 Founded in 1850, the Byron brand is a longstanding marque as one of the oldest brands in production today. Selected Tobacco is pleased to announce the addition of 2 new sizes to the line, as well as updated packaging.

The Serie Siglo XIX, carefully blended by Nelson Alfonso with a goal of best representing Cuban Cigars of the 19th Century is now available in a 6 x 56, known as the Grand Poemas.

The Serie Siglo XX – also blended by Nelson Alfonso – aims at representing Cuban Cigars of the 20th Century, and is also available in a 6 x 56 format known as Habanero.

Since the beginning, Byron was destined to unite smokers with exquisite taste, and today Byron continues to strive toward delivering a superior cigar that is the epitome of luxury. 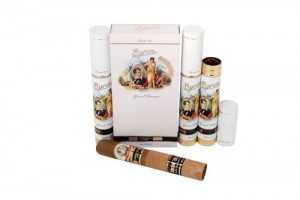 Both cigars are the largest Byron vitolas to date, and as a result each blend is tweaked a bit with a higher priming to maintain the strength and flavor required to match the larger ring gauge format.

Each cigar is protected inside a Humitube®, a uniquely effective humidified cigar tube chambered system that lets the cigar receive slow humidification through the wall of the tube that makes for a balanced humidity level throughout the cigar at any length.

Selected Tobacco is the brainchild of Nelson Alfonso who has designed some of the best known Cuban brands in the world, including the design of Cohiba Behike. He is also the Master Blender for Atabey, Byron and Bandolero which are distributed in the United States by United Cigar Group.

United Cigar Group is the distributor for all Selected Tobacco Products in the United States as well as the Garofolo, Fleur de la Reine, La Gianna and the soon to be released KILO. They can be found on the web at http://www.unitedcigargroup.com