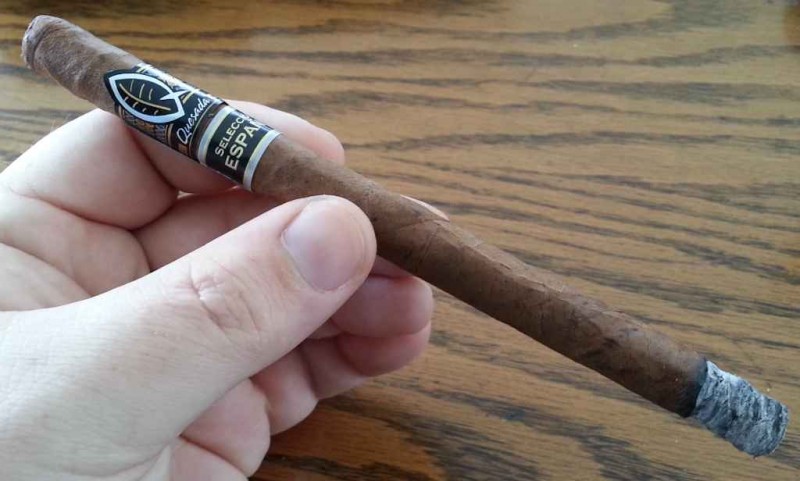 Welcome to Half Ashed Episode 106, featuring the Quesada España Ninfa as our Cigar of the Week.  This week’s cigar was one of Craig’s selections, and he has this to say about it:

In 2011 my life changed. My wife was expecting our first child and I was planning all of the Dad-to-be things we were going to do together later in life. One of those things was which box of cigars I was going to share upon my son’s birth; and with him later in life. In February of that year, I started down the path to figuring that out. I had just arrived in Santiago, DR on my first trip to the Dominican. It was to be a cigar filled, last hurrah before fatherhood settled things down a bit. At the MATASA factory I sat in a room listening to Manolo Quesada talk about the prototype cigar I was smoking. That cigar was a Robusto Espana and months before my son Luke was born, I vowed to make these cigars part of the birth of any & all of my future children. In May of that year I bought a box of Robustos and later followed it up with a box of Coronas to celebrate my second son, Liam.

Tonight’s CotW is a different vitola from this very special line; the Ninfa. A “pencil” sized cigar, these check in at 6-⅞”x32. An Ecuadorian Arapiraca wraps a Dominican binder and DR/Nica filler. These cigars are filled with beautiful cocoa, Tea and spice flavors and definitely bring a minor pepper note as well. They need to be smoked with a delicate touch but reward mightely if you behave.  They’re part of Quesada’s “12 boxes for 12 retailers” project where they give one box of special Espanas to one different retailer, each month for a year. These are from the 2014 release and are from Winston’s Humidor in Midlothian, Virginia. Side note: Kevin Edmiston was on the trip with me in the Dominican where we sampled the pre-release Espanas. We were guests of Cigar Tourism (Colin Ganley, Twin Engines coffee) and enjoyed a spectacular visit.

Burns Tobacconist in Chattanooga has a new owner and a new shop-exclusive in the wings.  Tobacconist Mike Hunter has obtained part ownership in the home of the Chattanooga Tweet Up, and was an integral part of orchestrating La Aurora’s partnering with them for the Cien Años lancero.  The cameroon-wrapped cigar is 7.5”x40, the same as the original Cien Años production, and features the same blend.  MSRP is set at $11.99 per stick in boxes of 25.

Pete Johnson teased a new event sampler that’s coming in the next few weeks.  It will feature 5, 5.5”x52 robustos from the La Riqueza, Tat Black, Havana VI, Cabaiguan and Tattoo lines, housed in one of the Tatuaje melamine ashtrays (not a fan of those ashtrays, personally).  It will initially be available for sale at Tatuaje events, but could become more widely available later.  Pricing TBA.

In what is probably pretty normal but seems like strange bedfellows to me, Romeo y Julieta has partnered with Boutique Blends to produce their next line – the Romeo by Romeo y Julieta Aging Room.  It will be made at Jochy Blanco’s Las Palmas factory in the Dominican Republic and will be available in three vitolas – 5×48 Copla, 6×54 Capriccio, and 6×52 Cantaor.  Total production is set at about 250,000 cigars, which will retail around the $10 mark.  The line will launch in April, and will be distributed by Altadis.

As posted earlier this week on Half Ashed, Viva Republica has released a special event cigar for the DC Tweet Up – a culebra.  While culebras are nothing new, I love the fact that this one features one of each from the Viva Republica core lines (Rapture, Guerrilla Warfare, and Rapture Maduro).  The cigars will be 5.75”x39, and will retail for $18 per set (=$6/cigar).  Only 1,000 sets will be made available.

We spoke a bit about Viaje last week, and in the time since they announced two upcoming releases, The Señor Andres’ Chicharrones and The Jalapeño.  The Chicharrones is interesting in that the line is actually 3 different cigars.  They feature similar blends, but with differing wrappers (Nicaraguan corojo, criollo and maduro).  The 4.5”x48 sticks will be made at TABSA using all-AGANORSA tobacco.  The Jalapeño is a 4.875”x51 figurado out of Raices Cubana.  No specifics about the blend were released.

L’Atelier is releasing a new line called the Cote D’Or (Gold Coast) next month.  There will be a soft launch at Federal Cigar’s 94th Anniversary this week, but full launch will come in April.  It will reportedly be a soft-pressed churchill, blended around Pelo D’Oro.  Only a couple thousand boxes will be produced, and the line will retail around $16 per cigar.

Espana Corona – My son Liam was born in December of 2013. I forgot to smoke my first Espana Corona from his box around his birthday so I’m doing it this week to celebrate the impending close of a hellacious professional project.

Don Pepin Garcia Blue – I learned some interesting revelations about myself concerning the lancero, toro, and robusto….

Next episode we will be featuring Unbanded #021, from listener DC.  Be sure to tune in Friday night at 9:30pm EST and hang out with us in the chatroom during the show.  If you would like to contact us in the meantime, you can reach us via the “Contact Us!” tab at the side of this page, or at the following emails:[email protected] [email protected] Please feel free to drop us a line if you have any questions you’d like answered, comments to make…or even compliments and complaints.  We love to get your emails!  Also, remember you can always go back and listen to previous episodes, which can be found in the Half Ashed Archive.  You can download this week’s audio directly below (right-click “Download” and save), find us on iTunes, or subscribe with any podcast app at our RSS Feed.  Video, as always, will be available at the Half Ashed YouTube Channel.

P.S. – If you have unbanded suggestions or contributions, you can get those to us [email protected]  This email address goes directly to my wife, so you can simply suggest an unbanded cigar for her to source, or send me an email to [email protected] if you have something you’d like to send in.  I will provide an address to send them.  Thanks!