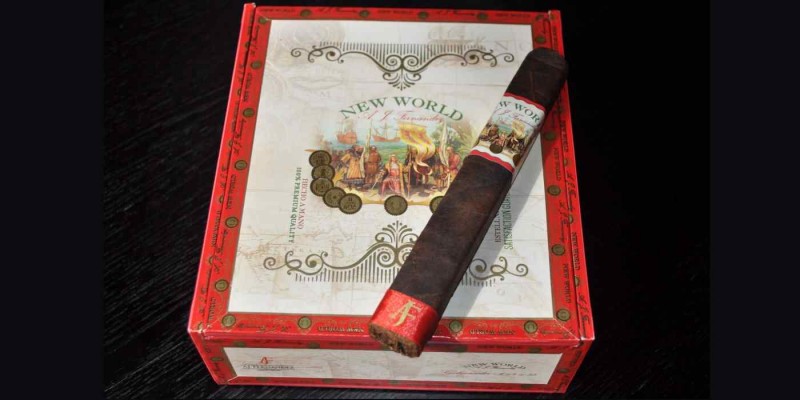 Welcome to Episode 103 of Half Ashed, featuring the AJ Fernandez New World “Gobernador” as our Cigar of the Week.  This is AJF’s latest major release, coming onto the scene after the 2014 IPCPR tradeshow.  The story behind the name is a celebration of the New World discovery of tobacco some 500 years ago.  Further, they related a bit more info in their press release last July:

The New World Cigar relates to expanding one’s knowledge and questioning the status quo by discovering our personal New Worlds as we go through life. The team at A.J. Fernandez Cigars is grateful for the amazing support we have received from the consumer and therefore will offer the New World Cigar at a value price as we invite everyone to join us on our New World journey.  Furthermore, I am especially proud to announce that my father Ismael Fernandez who recently retired after 17 years with the Plasencia family has now joined the A.J. Fernandez family. New World marks the first cigar that we work on together since he joined the company. “ — A.J. Fernandez

In the news, we cover several items, including:

Jonathan Drew posted up some further detail on the Pope of Greenwich Village.  From his Facebook post: “Pope Of Greenwich Village” is a specialty cigar that we created for our friend Abe at Smoke Inn Cigars for his “Micro Batch” series – that he’s been developing for the past five or six years (approx). … I believe that DE is the 10th installment with POGV … This 6×40 sized panatela is unique at‪#‎DrewEstate‬ because we don’t typically make an exclusive size outside our specific brands. Anotherwards, typically when we make the occasional commemorative or limited product such as Dogma or Shady15 or Def Sea or Cafe con Leche – it falls below a certain brand. This time it’s different and stands on it’s own. … the Pope Of Greenwich Village is strong, sound, and balanced, not a beginners cigar – but not made to blow your pretty head off your body. Please look for the limited release from Smoke Inn coming soon. They come in Soft Pack 10’s and ain’t that many of them. I BELIEvE that they retail for about $7.95 or so, but maybe a bit off. … Tonight is the Great Smoke Pre-Dinner and Drew Estate is honored to be the special guest with our friends at Smoke Inn.

We failed to mention it last week, but our condolences to the Padron family.  Jose Orlando Padron’s brother Estelo Padron – retired head of Villazon’s Honduran American Tobacco S.A. passed away, and was laid to rest 2/10.  He was 87 years of age.

Another Nebraska update!  As we mentioned a couple weeks ago, a bill was put forth to clarify the NE legislature’s intent NOT to include cigar bars & shops under the existing smoking ban.  The new bill specifically exempts such establishments, and has passed by a margin of 45-3!  The bill now goes to the governor who has until next week to either sign or veto (no pocket veto….no action = the bill becoming law).

There have been a few news items with various cigar companies building/establishing their presence in other non-US markets.  Most recently, CLE/Asylum partnered with a German distributor.  I’m wondering if this is typical organic growth, or if cigar companies are hedging their bets against an increasingly tough US market – whether because of increasing legislation/regulation or the possibility of an open Cuban-US market in the years to come….tune in for our total speculative thoughts on the matter.

Dante Cigars is putting out their next release – the Purple Mofo.  Like other offerings, this will be a Casa Fernandez produced cigar, laden with AGANORSA, and is to be produced at CF’s Miami rolling operation.  It will be a limited release of 1500 corona gordas, in 50 20-ct bundles and 100, 5-packs.  The line will only be released to a few retailers – including Burns in Chattanooga, UnderGround Cigar Shop (Ft Worth, TX), WestSide Humidor (Wichita, KS) and Cigar Federation’s online store.  Criollo wrapper over ‘99 corojo binder and Estelian fillers.  Due out mid-late March.

Knowing Craig’s penchant for enjoying Quesada’s cigars, I thought I’d mention the latest news from them.  Cigar Aficionado reported from this past week’s ProCigar event on the Quesada Reserva Privada, available in 3 vitolas (4.75” x 52, 5.625” x 54, and 6.5” x 56).  It is set to debut this Spring, and will feature tobacco from a 1997 crop.  It will carry an EC -CT seed wrapper over DR Criollo 98 (97 crop), and DR San Vincente / PA Ligero filler leaf.  The cigar will reportedly be held for aging at the factory for one year beyond rolling.  Releases will initially be limited to “key retailers,” and should ramp up at this year’s tradeshow…

La Gianna Havana Maduro – Toro – From United Tobacco made for David Garafolo’s daughter Gianna. A Honduran cigar with a nice cookie sweetness. The problem lies with the style of blending, not the blend itself. It’s stronger than the flavors “want” to be and is almost rough & Alec Bradley-like. Very similar but sweeter to the Alec Bradley Tempus I reviewed on Halfashed.com for the blind review last month.

EPC 5 Year – This is a good cigar that needs some time. There are great flavors there but I feel like they’re muddied or almost blinded by some of the tobacco characteristics.

Next episode we will be featuring a yet-to-be-determined selection from Craig.  Be sure to tune in Friday night at 9:30pm EST and hang out with us in the chatroom during the show.  If you would like to contact us in the meantime, you can reach us via the “Contact Us!” tab at the side of this page, or at the following emails:[email protected] [email protected] Please feel free to drop us a line if you have any questions you’d like answered, comments to make…or even compliments and complaints.  We love to get your emails!  Also, remember you can always go back and listen to previous episodes, which can be found in the Half Ashed Archive.  You can download this week’s audio directly below (right-click “Download” and save), find us on iTunes, or subscribe with any podcast app at our RSS Feed.  Video, as always, will be available at the Half Ashed YouTube Channel.

P.S. – If you have unbanded suggestions or contributions, you can get those to us by sending an [email protected]  This email address goes directly to my wife, so you can simply suggest an unbanded cigar for her to source, or send me an email to [email protected] if you have something you’d like to send in.  I will provide an address to send them.  Thanks!