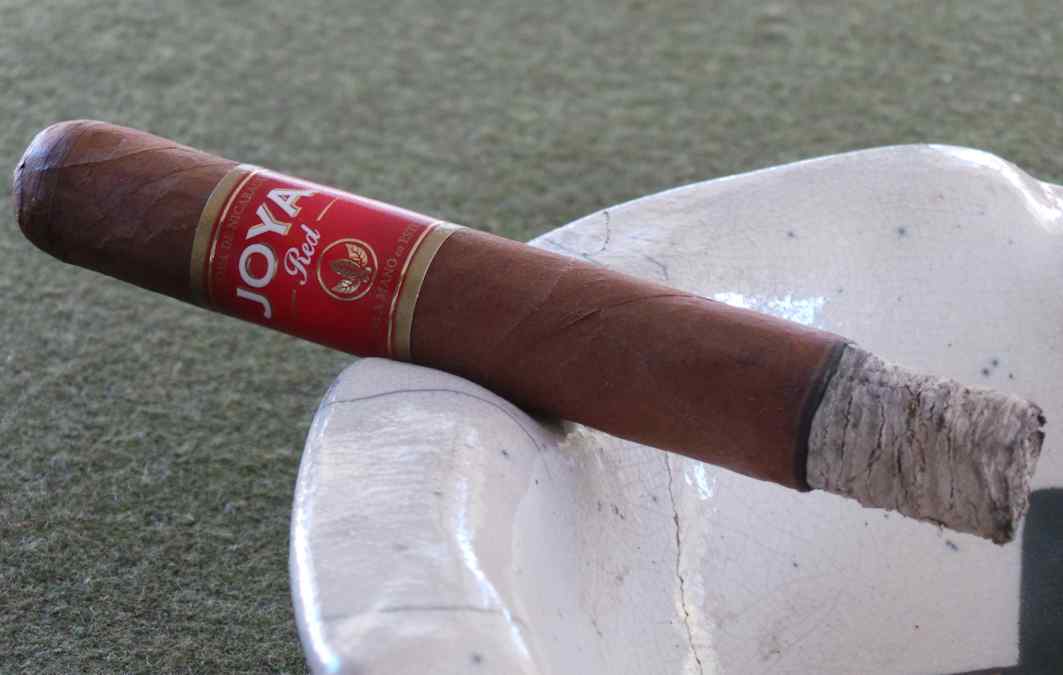 Welcome back for Episode 097 of Half Ashed, featuring the Joya de Nicaragua Red.  Kip’s preshow notes about the cigar were:

In June 2014, Joya de Nicaragua announced a new blend to be available at IPCPR 2014 (story archived at The Cigarmy).  The line was dubbed Joya Red, and marketed as a bit of a departure for the company in that it would forego the typical high-ligero content often present in their cigars.  The Joya Red would be more sedate in potency, yet strive to achieve boldness in flavor.  It carries a Nicaraguan Habana wrapper over Nicaraguan binder and Nicaraguan filler from Jalapa, Condega, and Esteli.  Four vitolas are available, the Short Churchill (4.75” x 48), Robusto (5.25” x 50), Cañonazo (5.5” x 54), and Toro (6” x 52).  I was skeptical at first, but have come to appreciate the kinder, gentler JdN offering.  I often get lots of bright, airy citrus flavors from these, with some lighter leathery flavors at times.  While I can’t say that I’ve mortgaged my house to stock up on them, they’re not a rare occupant of my humidors.

Tune in to find out how it went!

In the news, we had several stories to catch up on after missing last week’s show.  We discussed a couple of items related to Quesada, notably that they are producing a St. Patrick’s Day cigar – the Quesada Keg Edition.  Similar to the Oktoberfest cigars, it is intended to be paried with a beer, this time an Irish stout.  It will come in a singular 6”x50 vitola carrying a PA broadleaf wrapper over Nicaraguan filler & binder.  It will launch in March, and be available in 21-ct kegs (250 keg/5250 cigar total production).  MSRP is $7.95, and production is set in the Plasencia factory in Nicaragua.  Secondly, they are expanding the Casa Magna lineup with a 3-vitola extension to the Domus Magnus II line.  The extension is collectively called the Three Good Emperors, and features the D-shaped “Trajan” (5.5”x60), and two other vitolas (Marcus Aurelius and Hadrian), which have not had details yet released.  I understand the blend will be much like the standard Domus II offerings, but with a few tweaks.

We also covered an upcoming release from The Crowned Heads.  They will be introducing a 4”x42 vitola to the Jericho Hill line.  They will be called “Shots” and should launch somewhere around February 2015.  It is being marketed as a winter time smoke, due to its diminished size.  Halfwheel is reporting total production around 50k, but some hopes of seeing them again in 2016.

Room101 non-chalantly changed their header image on Facebook today….to a teaser about upcoming Master Collection Three.  No comment; no detail.  Just that it’s coming in February 2015.  I know a lot of listeners were fans of the first and/or second series…so get ready for the third!

Back in 2011, a short run of 5,000 cigars known as the M80 were released by Tatuaje and sold exclusively through Two Guys Smoke Shop.  It was a 4×50 petit robusto, and its end has been much lamented ever since.  Well, it’s returning.  Pete Johnson made comment this week, detailing that the blend will remain the same (Ec Habano Maduro over Nica/Nica), but packaging will change to avoid confusion with the original release.  It will be a regular production item, but still only available through Two Guys.

Next week, we’ll be featuring the Bodega Premium Blends “Digestivo” as our Cigar of the Week.  Be sure to tune in Friday night at 9:30pm EST and hang out with us in the chatroom during the show.  If you would like to contact us in the meantime, you can reach us via the “Click to Contact Us!” tab at the side of this page, or at the following emails: [email protected] or [email protected] Please feel free to drop us a line if you have any questions you’d like answered, comments to make…or even compliments and complaints.  We love to get your emails!  Also, remember you can always go back and listen to previous episodes, which can be found in the Half Ashed Archive.  You can download this week’s audio directly below (right-click “Download” and save), find us on iTunes, or subscribe with any podcast app at our RSS Feed.  Video, as always, will be available at the Half Ashed YouTube Channel.