NOTE: Subsequent to this post, JdN has issued a mass email that “Due to a conflict with the name “Cardinal”, Joya de Nicaragua have changed the vitola name to “CAÑONAZO”“ 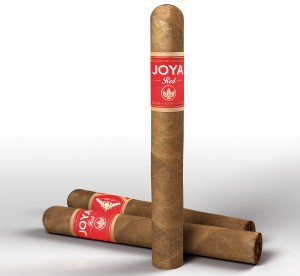 According to Joya de Nicaragua, smokers should rethink any preconceptions about the company’s proclivity toward making powerful cigars.

During this past week, they released plans for the JOYA RED, a new blend to launch at IPCPR 2014.  In their words, it has been developed “for the modern smoker by the youngest executive team in the industry, together with the most senior Master Blenders of Nicaragua.”  Recently appointed Joya de Nicaragua President Juan Ignacio Martínez led the current team of both fresh and longstanding executives in creating the blend.  The JOYA RED is promoted as a “vibrant smoke you will enjoy anytime, anywhere; class, as always, but also a lot more fun.”

Technically, the press release noted, the blend was still created with tobaccos from Nicaragua.  However, with the JOYA RED, a move was made away from past predominance of ligero and thick wrapper leaf to “more visos and lower priming Habano wrappers.”  Binder and filler tobaccos were also grown within Nicaragua’s tobacco regions of Estelí, Jalapa, and Condega.  The company hopes to provide a medium-strength blend with interesting flavors, allowing “for an extremely pleasant smoking experience.”

The line will ship in four vitolas, packed in 20 count boxes:

The JOYA RED will be available during the upcoming IPCPR Annual Convention and Trade Show in Las Vegas this July. As usual, Drew Estate will distribute the brand as part of their exclusive agreement for the USA, and it will also be available worldwide through JDN’s International Marketing Division and partners.

JOYA DE NICARAGUA S.A., is a family owned, Nicaragua-based cigar factory that handcrafts traditional cigars for the premium luxury cigar market. First opened in 1968, it is Nicaragua’s oldest cigar factory in operation and home to the legendary JOYA DE NICARAGUA® brand of cigars. JDN is regarded by many as the patriarch crafter of robust, unique puro blends of locally grown black tobaccos, and its cigars are sold in more than 40 countries around the world. For more information, please visit www.joyacigars.com.