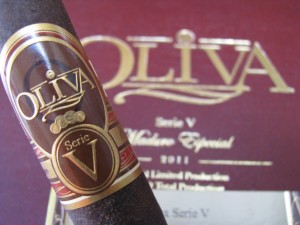 Well, Craig and I managed to put together another show this week, so we proudly present to you Half Ashed Episode 006!  I hope you’ll take the time to listen and/or watch the video, and give us some feedback – you can send your questions, comments, compliments, or complaints to us via email, using either of the following address: [email protected] or [email protected], or reach us by any of the contact means listed on the “Contact” pages here at The Cigarmy.  You can find the video for this show over on our YouTube page as well.  The Cigar of the Week was the 2012 Oliva Serie V Maduro, for which Craig will be posting an Epilogue review in the near future, and we covered a good bit of other news items, in addition to some legislative issues and what else we’ve been smoking over the past week.  Here’s a quick summary of the show:

Half Ashed Cigar of the Week:

As mentioned above, the CotW is the Oliva Serie V Maduro (2012 release).  I reviewed these cigars last year for the 2011 release, and absolutely fell in love with the blend.  I’ve been a fan of the maduro version of the Serie V since it first hit the market in 2008, and continue to buy them up as quickly as I can each December when they hit the shelves.  The 2012 appears to be the same size as the 2011 edition, and is at the least very similar in flavor characteristics.  It seems to possibly have the tiniest bit more “zing” to it, although that may be a factor of 1.)my terrible memory, or 2.)the fact that the 2011 now has an extra year of rest on it, and should not be compared side-by-side.  It’s full of dark chocolate and a sweet earthiness that I find quite pleasant.  I also notice some sweetened coffee in the tasting, although Craig didn’t get that in his experiences.

What else we’ve been smoking (listen in for details about each):

Again, thanks for tuning in everyone.  Be sure to come back next week, when we’ll be taking a look at the My Father Flor de las Antillas.  In the meantime, If you would like to contact us, use the emails above or through the contact page.  Also, don’t forget to go back and listen to previous episodes, which can be found in the Half Ashed Archive.  You can download this week’s audio directly above (right-click “Download” and save), or find us on iTunes.  Video, as always, will be available on the YouTube Channel.