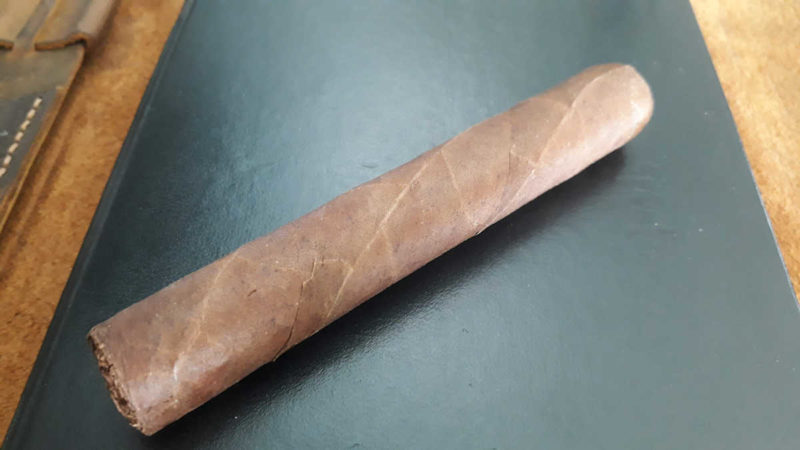 Unbanded 035, tonight’s Cigar of the Week, is roughly 5″ x 50 and has a moderate but even brown coloring.  The cold draw is dusty, and there is very little aroma on either wrapper and foot.  It was send in by Michael F. (much thanks, Michael), and we’re finally getting around to smoking it.  Let’s see how it goes….

AJ Fernandez is now shipping the new Ramon Allones. As we talked about several months ago, General reached an arrangement with AJ to produce the brand. I’ve been running this through my mind in the time since it was announced, and I wonder how this is going to play out. The line shares a name with a popular Cuban marca, but doesn’t really enjoy the same success. It had seemingly faded a good bit into many folks’ memories before being revived by this arrangement with AJF. Maybe new blends and a new manufacturer will breathe new life into the line…but I’m not yet convinced. The reason? The new cigars are to retail in the $12+ range. Unless AJ has departed from his core blending style, I’m not sure I’d personally drop the money for them knowing I can buy many of his other cigars at a much lower pricepoint. I don’t know if the uninitiated will spring to try them, either…and I’m certainly not sure there’s a strong non-Cuban RA following to pick up the slack. I’m not even sure why I’m even this interested in the story, but I am anxious just to see how it shakes out. Just for those interested, it carries an Ecuadoran Habano Oscuro wrapper over Nicaraguan Corojo ‘99 binder and filler mix from several Nicaraguan regions. Available in 4 vitolas – Robusto, Toro, Churchill, Torpedo.

While we’re on the subject, AJF has some more news coming down the pike. When I was at IPCPR 2016, the Bella Artes was all the rage. I couldn’t seem to get away from it conversationally. I smoked one at the show, and a couple since – and found it to be one of his offerings that appealed to me more than most, but not life-changing. It’s very good, and while it does fall into what I call his “core” flavor profile, I found it a bit lighter in flavor and a little sweeter. This year, he is releasing a maduro version for the line. It is to have a Brazilian Mata Fina wrapper (there’s a blast from the Dogwatch days), Mexican San Andres binder, and Nicaraguan fillers. It’s available in a Short Churchill (6” x 48), Toro (6” x 54), Gordo (6.5” x 58), and Robusto (5.5” x 52). Pricing will be in the $10 range at retail.

It’s getting close to that time of year again. Well, almost. As has been the case for the past decade, Oliva will be releasing a maduro Serie V come this November. In fact, there will be two this year – the seemingly now-standard Gordo (6” x 60), and a 5” x 54 Double Robusto. Total production this year will run around 60k, and retail pricing in the $9-10 range. I, for one, couldn’t be happier to hear of the return of the Double Robusto. This is the vitola I first loved for the line. I liked the Belicosos as well, but this guy was outstanding. I’ll be arranging for some of these once they hit shelves…

La Flor Dominicana Air Bender Maduro (“Casita” Cigar) – This strong Maduro cigar was delightful. Really rich and aromatic both prelight and room aroma in my truck. Tip of the Day: DON’T relight this cigar. It did not fare well.
My Father Event Cigar – Truly a great approachable blend. The only My father product that smacks of sweet bready flavors. Terrific, terrific offering from the factory.ol