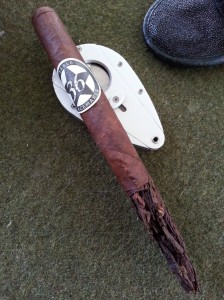 Quite some time ago, Will Blicharz of Table 36 Cigars provided me the samples smoked for this review, and now that I’m back in the swing of review-writing I thought it was high time I gave some props to a cigar line I have come to enjoy quite a bit. I have reviewed one of their cigars before, and written of them during IPCPR2013.  Today, we’re looking at “The Bullet”, from Table 36 Cigars’ Peacemaker line. From their website:

“A tribute to the great westerns of Jimmy Stewart, John Wayne, and Clint Eastwood. From the exploded shaggy foot to the re-imagined Table 36 logo reminiscent of a Texas Ranger badge, The Peacemaker harkens back to the day of Railroad Towns, Saloons, and Gunslingers.
The Peacemaker joins our two existing lines, Fellowship and Integrity, and features a rich Nicaraguan wrapper and a Brazilian binder. The filler is a multi-region blend featuring diverse tobaccos from Jamastran and Azacualpa in Honduras and Jalapa in Nicaragua. While The Peacemaker steps outside our “Core Values” line, it continues in the Table 36 tradition of providing a premium boutique cigar at a great price point.
This is a rustic looking stick with an exploded shaggy foot and a toothy wrapper providing a medium strength flavor profile. The Peacemaker comes in four all new sizes: The Bullet (4 1/4 x 42), The .45 (5 1/2 x 45), Tin Star (7 x 43), and The Judge (6 x 52).”

The color of all 3 provided Peacemakers is medium to dark brown with a clear, even tone. The complexion is not oily or wet, but quite slick; they have an almost powdery feel to them. The cigars could be perceived as rustic, but the “exploded” shaggy foot probably goes a long way toward giving you that impression. Veins are pronounced but moderate. I’m really surprised by the consistency within the pack for each. Many times, a cigar with a shaggy foot might be soft toward the foot. This one is actually well packed throughout – neither hard nor soft spots – right up to the edge of the wrapper.
Prelight, the resistance is perfect, within the “goldilocks zone” for me. The unlit flavor is almost minty, and leaves a “fresh” feeling on the palate. Some hay is noticeable if a prolonged draw is taken. The cold aroma is very faint, giving a bit of hay and not a great deal more.

Just for fun, I light the very tip of the extreme shaggy foot. Of course it won’t smoke that way; your “draw” is dissipated before reaching the ember until it has burned about 1/2-2/3 of the length between tip and the beginning of the wrapper. Knowing that I couldn’t smoke it, I just kept the end smouldering until it had gotten close to where I had confidence it would burn. Amazingly, this only required one relight. I did this so I could simply smell the aroma of the interior tobaccos as they burned. This aroma smelled spicy and a bit sharp at times, but was overall pleasant. 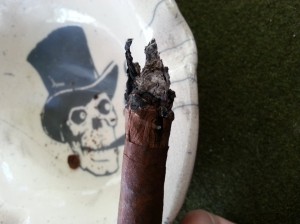 Once the scant end-shag had burned away, I could finally get down to smoking. The first few puffs were potent for lack of a better word. I could definitely feel the nicotine working on the back of my throat in these first few minutes. The flavor was of peppery spice, yet tempered with some nuttiness, which I presume to be coming from the Jalapa in the filler blend. I’m impressed that the internal leaves can stand so well on their own, without the flavor-dense wrapper leaf. At this point, I’m anxious to get into the wrapper just to see what else is brought to the table.

As the burn arrived at the cigar proper, I had to touch it up a bit. The exposed binder leaf had a slightly slower burn rate than the filler components, and had to be “helped” a little to even it up. First off, I am immediately awed at how much this wrapper lends to the blend. Once it was alight, the blend lost every last bit of the aforementioned sharpness. The stick now presented a nutty core of flavors, with a touch of sweetness as a backdrop.

I initially had mixed feelings about such an extreme shaggy foot, but I now find myself much more in the “pro” camp. I’m 20 minutes into this cigar and just now getting to the full blend itself….but, by virtue of the foot, I’m come to know the blend a little better. I’ve had the opportunity to smell the internal components without the added impact of the wrapper. I’ve been able to look over the construction, and had the chance to just to enjoy every aspect of the cigar without sacrificing any of its intended length. That actually comes in quite handy for reviewing purposes. 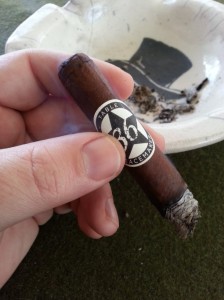 The core nuttiness persisted throughout the central portion of the cigar.  There were frequent wisps of other flavors – coffee, a slight cedar, some red pepper here and there – but the protagonistic nutty flavor was perpetual.  As I lead into the final portion of the Bullet, I am beginning to feel the effects of a nicotine dose. It certainly isn’t overpowering; I’m not experiencing any cold sweats or dizziness. However, there’s no doubt I’ve had a cigar. Despite being a complete nicotine wimp, I’m surprised at this from such a small cigar. I suppose Peacemaker is a good name….because at the longer lengths it might knock all the fight out of you :).  The pepper, in particular, was quite entertaining during the late stages. It was present most at the beginning and end, taking a hiatus in the mid portions. Nearing the end, this pepper was quite prominent, but the faint nutty sweetness kept it corraled. This persistent sweetness has pleasingly tied it all together for the cigar’s length.

I’ve now had the Tin Star and Bullet, and still have the .45 to go. I have thoroughly enjoyed the first two, and expect to the third. The similar ring gauges have made the profiles quite similar, but going forward I will likely stick to this Bullet. If you are more nico-tolerant than I (and you almost definitely are), I would recommend one of the longer sizes. Construction has been spot-on, and I think it’s a fantastic blend. It is definitely worth trying out, if you can find them. In fact, I would recommend actively seeking them out…they’re not yet exceedingly common, but well worth the trouble. Now, if I can only get one of my local shops to carry the line….