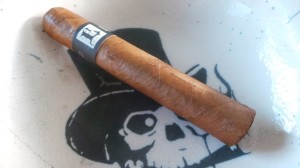 Some of you will remember that we had Sam Leccia on Half Ashed (Episode 010) earlier this year.  That was just before Sam’s new cigars launched, so we weren’t able to procure any of them at the time.  I have since been able to purchase a few on one of my trips to South Florida, so today we’re taking a look at the Black.  The Black is made in the Dominican Republic and has a habano wrapper, Nicaraguan Rosado binder, and a filler blend containing ligero from Esteli, Nicaragua and the Dominican Republic, as well as Brazilian Mata Fina and a half leaf of “Dark Fire”.  According to Sam, “Dark Fire is wood fire cured giving the tobacco a smoked whisky flavor and aroma. Very complex notes of spices and charred oak.”

I’ve mentioned on numerous occasions that the fire curing process, and the tobacco it produces, intrigue me to no end.  I am familiar with the various iterations of fire cured leaf that makes an appearance in pipe tobaccos, but until very recently had never seen it used in a premium cigar.  The Black may very well be a harbinger or bellwether of things to come – as I’ve now seen a couple other cigars in the works that will/do contain some type of fire cured tobacco.  In any event, today’s example is the 552 (5″X52) from the Black lineup – which retails for approximately $8 in South Florida.  The line is also available in 4″X46, 6″X50, and 6″X60 – and is distributed by Torano.  All that being said, let’s fire up the fire-cured…. 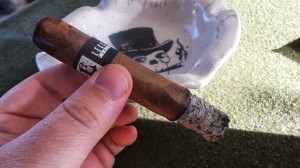 The Black is medium brown in color, with a slightly golden hue. I find no soft/hard spots across the length in any of the four I have now smoked. The draw has been exceptional as well. Actually, the construction has been spot-on in all examples.

Before lighting, I find a pleasantly savory draw. The uniqueness of the fire-cured is most prominent on the draw and the aroma at the foot, and reminds me of some oriental blends of pipe tobacco (for those versed in pipe tobacco, I do NOT draw any correlation to typical flavored tobaccos; my intent here is that it reminds me of traditionally (also fire-) cured oriental tobaccos – in particular, some of the regional component varietals common in the near/middle east). The aroma on the wrapper is less pronounced, with a slight barnyard bent.

The initial puffs produce a great deal of smoke and a good bit more spice than expected. The spice is nicely controlled, and doesn’t even approach the nasal napalm found in some Nicaraguan blends.  During the first inch or so, the spice continues, remaining very pleasant with the slightest bit of smoky sweetness on the finish. I have noticed a trend in the Black for carrying a bit of a scalloped burn, but overall it has been quite well-behaved. The smokiness of the Dark Fire is far more subdued than I had expected. In single malt circles, it would be more akin to Dalwhinnie than Laphroag. It is clearly present, but with an almost honey sweetened overtone rather than in-your-face or shrill peat.

Into the second third, I think this cigar really comes into its own and shines. It provides tons of chewy, leathery, smoky goodness. Again, I find myself surprised at the subtlety of the Dark Fired – probably because I had expected it to be more pronounced. The leather that comes into play during this portion is very complementary to the sweet smoky flavor palette, and provides a clean backdrop to just sit back and enjoy the smoke. 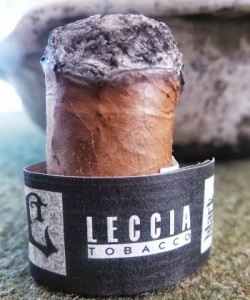 In the final stretch, I notice a slight uptick in the strength – but still within the medium range to my constitution. The sweetness has subdued, but still lingers pleasingly on the finish. I’ve seen wildly varying impressions of this blend – there are those who think it’s the best thing since sliced bread, and those who think it’s an offense against nature to try something so out of the ordinary with a cigar. I happen to fall into the former camp. With each of these I’ve smoked, I find myself increasingly enamored with it. It’s simply a cigar to just sit back and enjoy the ride. In fact, I am having to resist that urge just to allow for the distraction of writing a review…

I was surprised by the subtlety of the Dark Fire, based on my preliminary impressions of what this cigar might be. This subtlety is what makes the blend a homerun. Had Sam chosen to make something more brash that single-mindedly drew attention to the fire cured leaf, it might have strayed into being seen as a gimmick or marketing ploy. As it is, I find it to be a very interesting new addition to the blending lexicon. The Black is a fantastic foray into the use of something different – without taking away from traditional cigar flavor profiles. I don’t assign numerical values in my reviews, opting to just describe my experience with a cigar in terms of construction, value, flavors, availability, etc. – but if I did, the Black would rank exceedingly high on any scale. I would highly recommend it to anyone. Anyone. This is a cigar you owe it to yourself to try.