Good day, folks and welcome back for another episode of Half Ashed.  Craig and I appreciate you stopping by.  We were honored to have Sam Leccia, of Leccia Tobacco, as a special guest this week to talk about his upcoming new cigar releases.  We talk with Sam about his Black and White lines, which will be released in about a month or so.  He was gracious enough to share some information about himself, his blending philosophy, the vision behind the new cigars, and provided a great deal of insight into the Black and White.  Thanks to Sam for taking the time to hang out and share with us all. 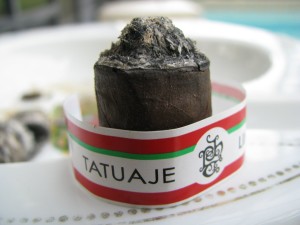 Our featured cigar this week was the Tatuaje LE Mexican Experiment, which was a limited run of cigars released by Pete Johnson last year.  I reviewed the cigar at that time, and it was very interesting to note how it had changed in the past 10 months or so.  It was a phenomenal cigar, and one which I would personally love to see in regular production.

In legislative news, we covered the (probably temporary) fail of the Florida outdoor smoking ban, and new tobacco tax proposals at the federal level.  We also quickly covered some interesting cigar news concerning new releases and trimming of the old from Davidoff, and a few items in our “What have we been smoking” segment for the week.  Finally, we wrapped up with a listener email or two, and some new video reviews posted on Cigar Federation by Michael Stewart for the cigars he won in our previous giveaway.  We thank you for stopping by, and I hope you’ll give us a listen or watch the video via the means below.  Have a great week!

Next week, we feature the “E” as the Cigar of the Week – an interesting and sure to be enjoyable release from BOTL, LLC.  On our next live show (May 10th), we will host the Ezra Zion guys to tell us about their upcoming Limited Edition – the Tantrum.  The following week, we’ll have a visit with Will Cooper (Cigar Coop) as well.  Again, thanks for tuning in, and be sure to check back in next week.  In the meantime, if you would like to contact us you can reach us through the contact page or at the following email addresses: [email protected] or [email protected]  Also, don’t forget to go back and listen to previous episodes, which can be found in the Half Ashed Archive.  You can download this week’s audio directly below (right-click “Download” and save), or find us on iTunes.  Video, as always, will be available on Half Ashed YouTube Channel.