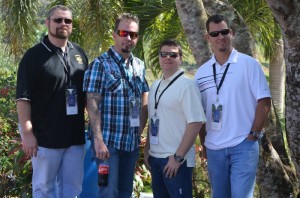 We are back!  As most of you know, portions of The Cigarmy traveled to the Dominican Republic this past week via Miami, to attend CFC 2012, the Fuente & Newman families’ annual celebration of the Cigar Family Charitable Foundation.  We hit the road to Miami from our little slice of Central Florida last Wednesday to spend the afternoon before departing.  We visited a couple of tobacconists while there.  First, we went to Cuban Crafters for a few new (to us) sticks, grabbed a quick lunch and found a nearby tobacconist (Speakeasy Cigar Lounge) where we hung out for an afternoon smoke before catching our plane.  Most have heard of the former, as they maintain a small factory onsite, and do a brisk online and catalog business.  The latter, however, we stumbled upon while looking for a place to hang out for the afternoon. I’d link to their site, but it appears to be dysfunctional at the moment.  Cuban Crafters has a large selection of boutique and national brands, as well as their own product.  Additionally, they have Cuban coffee, sandwiches…and even a barber shop onsite.  Tons of domino playing as well.  We were only there for a little while, but it would be a great place to spend the day if you find yourself with some free time in Miami.  Speakeasy has a smaller selection, but offers some high quality cigars and the owner was exceptionally friendly and helpful.  We did manage to catch the correct plane for the short jaunt down to Santiago, after being redirected into a grand tour of a few MIA terminals .  The Fuente & Newman families arranged for pickup at the airport, and delivered us safely to Hodelpa Gran Almirante, where we just made the poolside reception for the event, complete with a few cigars to occupy our time. 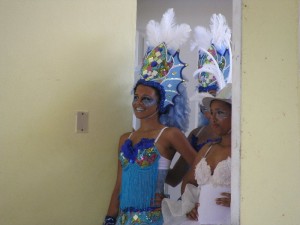 Thursday morning came early, as we headed south to Bonao to visit the Foundation and Chateau de la Fuente.  I have mentioned CFCF before, and I just can’t emphasize enough how great an organization this truly is.  The work being done there is amazing.  Bonao is an area that historically has had very little in terms of material wealth.  For many residents, “very little” would be better stated as “nothing.”  The Fuentes and Newmans began the foundation in 2001 to help the people of Bonao – providing clean water, bridges over the creeks that must be crossed to reach the area, a school, food, medical and dental care for the children, and much more.  The two families also underwrite the overhead and administrative costs for the foundation…which means 100% of donated funds are actually put to use for the children and their families.  As you’ll see in the pictures to follow, the results are astounding.  I am a donor, and would wildly encourage anyone to become one. 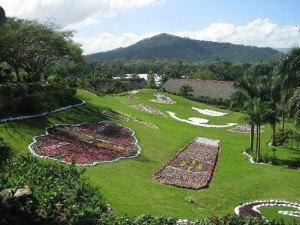 I tend to be skeptical toward some charities after checking out how they handle donations and funds…since seeing how CFCF operates over the past few years, I have no qualms whatsoever.  We visited El Grito de Carlito and the School grounds (where we saw the children dance and sing, complete with Carnivale costumes).  We were also honored to witness the Foundation’s first black belt awarded to a student.  Kudos to Tony Kattengell, who has spent countless hours teaching martial arts discipline and focus to bring up leaders for the future of Bonao.  Afterward, we headed to the original farm for a traditional Dominican lunch of goat, pork, plantains, yucca, etc.  And…more cigars!  We roamed the grounds, busily snapping pictures along the way.  It truly is a beautiful place.  The evening consisted of a return to the hotel, a good dinner, and more poolside camaraderie. 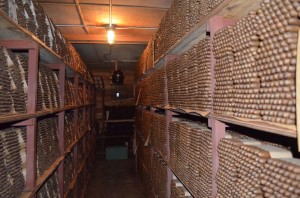 On Friday, we were in the afternoon group to tour the factory so we didn’t need to depart the hotel until 11:00am.  We had lunch at Il Pasticcio – they provide great family style Italian fare in Santiago if you ever find  yourself there.  This was followed by a tour of Fuente Factory #1, which I’ve come to refer to as the Happiest Place on Earth.  Forget what you’ve heard about Disney World.  This is it.  This was my second visit to the factory, and it still amazes me just to watch the process and learn what goes into the cigars we all enjoy, and see the sheer number of hands through which tobacco passes to make a cigar.  I can’t go into detail about every step, or this would turn into a monograph rather than a blog post.  You can check out the pictures – and have a peek at last year’s as well.  They’re that good :).  At the end of the tour…wait for it…even more cigars!  After an amazing afternoon of shared cigar knowledge, we headed back to the hotel for a short rest and headed to Camp David Ranch for the final celebratory banquet of the trip.  The view of Santiago at night from Camp David Ranch is spectacular, and sitting on the veranda enjoying a cigar while absorbing that view with a nice vantage for the Southern Cross is a very calming experience to say the least.  The night was filled with cigars, fellowship, dancing, and more cigars – including some very limited treasures I’ll have to admire in the humidor for a while before I can smoke them. 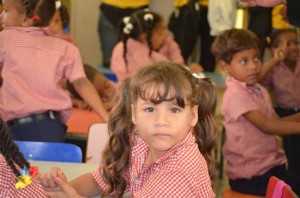 There are a number of group trips available for cigar folk to visit cigar country(ies) throughout the year, but none to celebrate a better cause than CFC.  Again, I greatly encourage you to give to the Foundation if you have a little extra this year.  You can rest assured it will be stewarded well.  We had the chance to meet a number of great folks on the trip as well – including Brian Berman of the Cigar Rights of America.  If you don’t belong to CRA, you should if you value your ability to enjoy a cigar.  This is a another organization I’m passionate about.  I have seen other groups akin to CRA that never seemed to make a difference.  CRA continually produces a measurable impact on preserving our freedoms, and needs all the help they can muster.  We also met some great guys from Boveda/Humidipak – Sean Knutsen, Charlie Rutherford, and Tim Swail.  I’ve known about and used their products for a long time, and it was nice to put faces with the company, and they’re good guys to boot.  We also had the opportunity to hang out with Kevin Paige (who recently took over A Cigarsmoker’s Journal blog), as well as a number of other folks I am better for having met.  Maybe it was the nature of the celebration, and the fact that everyone there was in one way or another associated with the Foundation, but the ratio of knuckleheads to good guys seemed very favorable on this trip.  It certainly made for a good time.

Saturday morning, we climbed back on a plane to Miami, alongside many CFCers, the Newmans, and much of the Fuente family – Carlos Sr., and the lovely Fuente ladies – Cynthia, Liana (Carlito’s daughter), and Christina (Cynthia’s daughter).  I prayed for a safe flight, not just for those onboard, but for the sake of future cigar smokers as well :).  Once we landed at MIA, The Cigarmy headed directly from the airport to the Charmed Leaf Grand Opening and Tweetup.  There, we met up with local cigar smokers and a number of owners and reps from quite a few manufacturers.  Present were Bob and Liz McDuffee from Dogwatch Cigar Radio (tune in on Friday nights at 9:00pm EST), Frank Herrera (La Caridad Del Cobre), Eddie Ortega (Ortega Cigars), Luis Sanchez (La Tradicion Cubana), Barry Stein (formerly of A Cigarsmoker’s Journal, now with Miami Cigar), Ron Andrews (Los Nietos), Andrei Iordachescu (Toro y Leon), and Reynold Benitez (Benitez Cigars).  There were many more present that I was not able to chat with, including Jonathan Drew of Drew Estate, as we still had a five hour drive back to Tampa ahead of us.  It was quite an event, and I believe the Charmed Leaf has a long and fruitful future ahead as a premier boutique tobacconist.  Give Elissa a visit on her site, or a call if you’re looking for some fantastic boutique smokes that may not be available locally at your B&M.

This was a banner week for The Cigarmy, getting to know so many new faces, both those within the industry and many who just enjoy a good cigar.  It was an amazing trip, and while the pace was whirlwind the fun was nonstop.  We loved every minute of it, and look forward to building friendships with those new faces, and meeting more in the process.  We especially  want to thank the Fuente and Newman families and all their employees who were (again) incredibly hospitable and gracious.  They went far above the call of duty to make sure everyone had a fabulous time, and we absolutely did.  I can’t think of any better folks in the industry.

I have now rambled quite enough…how about some pictures?  You can find those by clicking on the link below.  I’ll apologize in advance – for the most part, they aren’t captioned.  If  you want to know more about any particular picture, just let me know and I’ll answer as best I can.  Also, the pictures hosted here on the site will be lower resolution than we took.  If you’d like a full size file, just comment or email me and I’ll get that to you as well.  As always, thanks for reading, and we’ll be back on schedule next week with some new reviews!

VISIT THIS PAGE to see pictures from past CFC Events