Home » Half Ashed Editorial Category Archive » Poll: Where do your Cigar Loyalties lie? 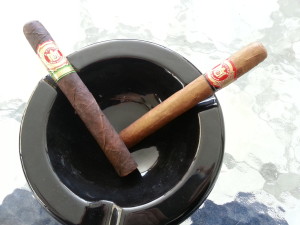 Cigar smokers can be a fickle bunch.  The sheer volume of chatter about what’s hot or what’s new is often staggering.  Sometimes, we seem to be always chasing the next great thing to come down the pike…only to find ourselves looking for the following new stick before the ashes even cool.  Why do we do that?  Is there really even such a thing as a Holy Grail smoke?  Are we looking for that one special line of cigars that is so life-changing that once we find it, we’re happy to smoke it exclusively from thence onward?  Or, is it simply smokers’ pride kicking in to be able to condescendingly tell our friends all about that new stick that they haven’t had the opportunity to try yet?  Envy when we’re on the other end of that equation?  A combination of all these?  I don’t know, but it is an interesting phenomena to witness.  Twitter, Facebook, and other varied and sundry forms of social media commonly light up with activity when a new cigar from a hot maker begins to hit shelves, or even before when preliminary samples make their way into the hands of eager cigar enthusiasts at events or through other early distribution channels.  The same could be said on a smaller scale in idle conversation at the local brick & mortar cigar shop.  I’m not pointing a judgmental finger at this; I’ll admit to chasing no small number of new cigars myself.  I wouldn’t even say outright that’s it is a bad thing.  I think in many ways, this is invigorating to the hobby.  It can prevent sales from becoming stale, and produce a fervor that is beneficial to both the smoker and manufacturers.  It certainly keeps blenders on their toes – many, who might otherwise create a decent cigar and lapse into resting on their laurels, are driven to come up with new ideas, vitolas, blends, and other products just to stay one step ahead of the next guy.  This has led to an abundance of great cigars in the market today – a veritable survival of the fittest cigar.  I’ve been enjoying these little bundles of leaves for almost 20 years, and don’t ever remember a time when so many great cigars were so readily available.  I certainly remember the myriad blends that came out in the ’90’s cigar boom, but that was a very different time.  The consumer was less informed, and quite honestly there were many lackluster cigars sold just because so many people wanted to have a cigar – any cigar.  Of course, once the boom subsided most of those marques went by the wayside because they simply couldn’t compete in a more informed marketplace that carried higher expectations.  Over the years, I have cycled to and fro, atop the crest and down to the valley within the paradigm I’m describing.  There have been times when my purchases were of a very limited range of cigars. 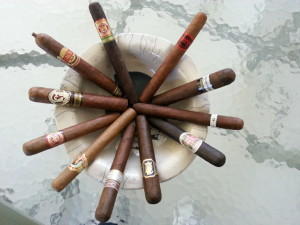 There have been others when I might go months at a time without smoking more than two or three of the same stick.  This year, I have smoked more different brands and blends than probably any cumulative ten years previous.  Yet, in recent weeks I’ve had the urge to revisit many of the cigars that consistently kept me interested in the past.  Even during times of wide, leafy experimentation, there are a couple of cigars that have never left my rotation entirely.  Two of those – both Fuente products (the 858 maduro and the Don Carlos number 3) – are always in my humidor.  I have loved those two cigars for all these years, and never tire of them.  I frequently reach for them, even today.  There are probably 10 other blends that I have taken a shine to during the most recent 5 years which I also keep around just about all the time, and expect to do so for so long as they are available.  As I sit mulling this whole process over in my head, it has piqued my interest.  I’ve known people, more so with pipesmokers than cigars, who were able to find a blend and happily stick with it…forever.  On the other end of the spectrum, I’ve known a few who rarely smoke the same thing twice.  I seem to rise and fall with the tides, almost on a sine wave of cigar sampling.  Knowing that the aforementioned two blends provide me with a pleasing experience every time, what is it that sends me back to the cigar shop to continually try new blends?  After a great deal of self-evaluation, I still don’t know.  But I have to admit I’m enjoying the heck out of the process.  Perhaps that is the answer, but the “why” is still a mystery.  I was interested in where the rest of you all lie on the continuum.  So, what sayest thou?