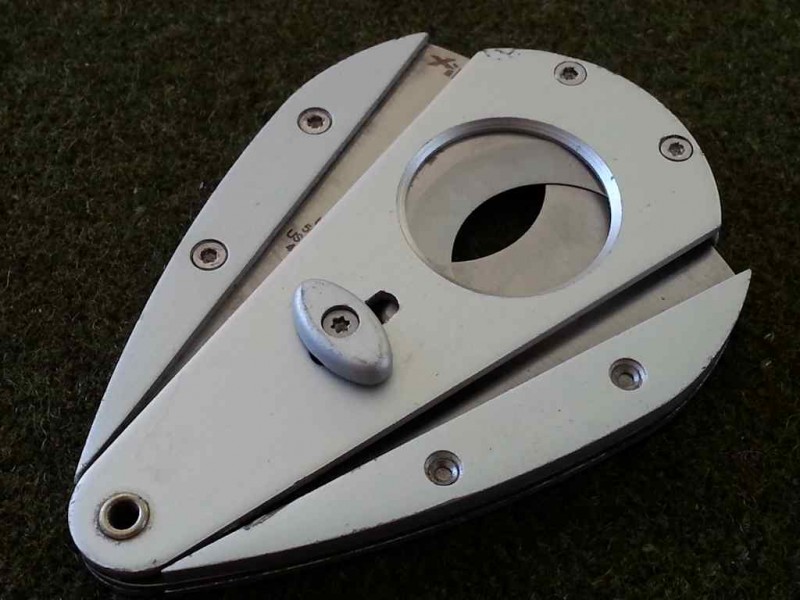 First off.this is absolutely NOT a dig on Xikar. I’m a huge fan and have been for many years. I own no fewer than a dozen pieces of their product, and believe they produce a quality product. This is merely an honest request to see if someone has a solution for this. The Xi1 pictured above is one of my favorite cutters. It’s been a trusty companion for an unfathomable number of gatherings, clipping hundreds – if not a couple thousand – of mine and any cutterless cohorts’ cigars. But, in recent months it has begun to stick. Badly. The picture shows what happens when I press the button down these days. It simply won’t open without several gyrations and attempts at prying it open to make the cut. This wouldn’t be a huge issue, except it also sticks when actually making the cut.which often tears or dings the head of the cigar producing a poor cut. A quick Google search produced advice that it was merely getting sticky from bits of tobacco leaf, oils or other detritus. The solution is a quick soak and/or scrub with rubbing alcohol.

So that’s what I did.

I’ve soaked. I’ve scrubbed. I’ve removed the button and really gone to town with an alcohol-drenched Q-Tip in ever nook, cranny and crevice. It’s about as clean as a lay person can get it. Something is still “catching” every time.

I know – Xikar has a great warranty. I could send it back and they’d likely repair/replace it without even question. I’ve done such before with lighters. However, I am trying to avoid that if there’s another good solution I could just do myself and save the time and trouble of shipping, etc. Yes, I have other cutters that would suitably stand in during transit. I get it. I’m just “that guy.” If there’s a quicker way, I’m up for it.

(And no, I’m not looking for advice on a different brand. I have plenty. This particular cutter just has some sentimentality behind it.)