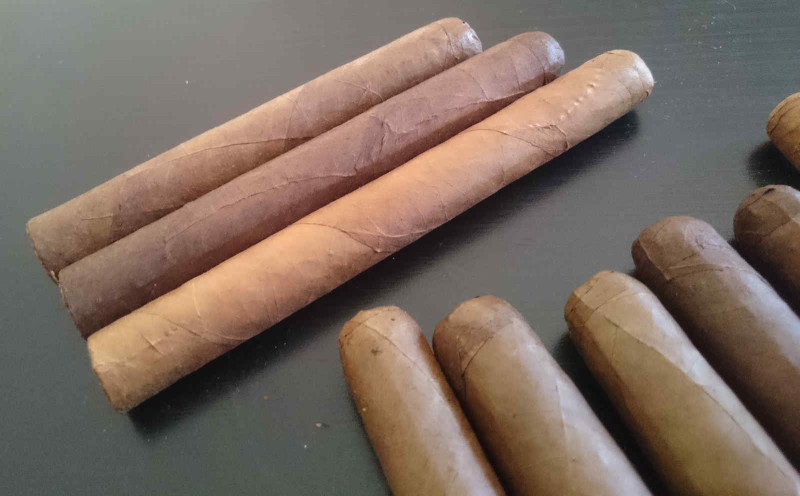 In the works for TL Johnson…

One of the advantages of living in Cigar Country is that many of the Dominican cigar factories are a 10 minute drive from my house.  So, I occasionally have the opportunity to stop by for a visit to check in and see what’s new and upcoming.  I knew Terry Johnson was in town at the moment, so I dropped by Tabacalera TL Johnson yesterday and had the chance to catch up with him for a while.  Terry tells me he has quite a few projects in the works for this year.  It’s no secret that I’m a fan of his work since opening his factory last year.  I got the chance to look over and smoke some of his new projects yesterday…and my appreciation for the work continues.1

I’ve been vocal on Half Ashed that I believe he’s doing all the right things to get TLJ into a position of prominence within the industry.  He’s laid a groundwork of producing a quality product and controlled the growth of his brand so as not to outpace his capacity.  The quality control is on par, his leaf inventory is solid and sustainable for controlled growth, the blends are well thought-out, and he has assembled a good team with which to work.

I had the opportunity to look over some of the currently-under-development packaging and cigars.  I’ll withhold pictures of the packaging pending revision.  While there, we smoked the reblended TLJ Reserva and Legend Reserve.  I also came back with a Connecticut version of the recently released Counsellor as well.  Here’s the quick 40,000-ft overview of some upcoming projects….

The TLJ Reserva Sumatra comes with a Sumatran wrapper over all Dominican binder and filler.  I found it to be very clean on the palate, with a prominent cedar component and a slight sweetness that intermittently came into play throughout.

The ’63 is being dropped from the name, and the blend for the line has been tweaked.  It has a San Andres wrapper over Dominican binder and filler.  This may actually be my new favorite cigar from his range.  It provided a flavor profile that was quite dark and sweet, with some raisin and date flavors that were astoundingly good for my tastes.

The Counsellor line is available at the moment in a San Andres wrapper, but will soon add a Connecticut wrapped version.  I have not yet lit this one up, but look forward to it based on some of Terry’s other CT work I sampled back in January.  I will report back via our forum once I’ve had the chance to give it a fair shake.  Besides the Connecticut wrapper, it carries Connecticut Ecuador binder and all Dominican filler.

All three blends contain most/all tobacco grown by TL Johnson & Co.  The TLJ Legend Reserve contains one particular pilot varietal solely produced by TLJ.  All of these should be shipping as we near the IPCPR tradeshow this July.

I contend that 2016 could very well be a pivotal year in the development of Tabacalera TL Johnson.  They have picked up production of several lines for a number of shop/house blends, as well as Tarazona and a couple other boutique companies.  I believe some of the early groundwork and patience will pay off, and the foothold they have enjoyed in regional pockets will expand over the next 12 months.  I’m looking forward to these and other upcoming projects Terry’s not yet willing to talk about publicly.  If nothing else, I’m anxiously awaiting ready availability of the new TL Johnson Legend Reserve.  These early samples are phenomenal….

1 – Terry has appeared on our show as a guest (way back on Episode 021), but as you may know we don’t sell advertising on Half Ashed to avoid any real or perceived bias due to monetary factors…so while the opinions expressed here are personal to me, they’re based on my enjoyment of what I consider a good product.