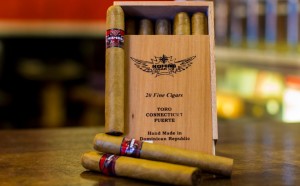 has announced the addition of a Belicoso to its popular Connecticut collection.  The Dominican-made Nomad Connecticut Fuerte line launched in March 2014, and has been previously available in four sizes (Corona 5.5″x44, Toro 6″x52, Robusto Gordo 5.5″x54, and Robusto 5″x50).  Founder Fred Rewey added the 6.25″x54 Belicoso after some experimentation with various sizes.

“I think every manufacturer sometimes has a host of other sizes for personal use or for friends that request them. Frankly, the Belicoso was just fun. It was one of those sizes in the Connecticut line that I found myself smoking a bit more often. No sense keeping them all for myself.  The industry reviews on the Connecticut Fuerte line have been very positive and I look forward to adding to the family,” Rewey added.

The release comes just two weeks ahead of Nomad’s release of a new line of Nicaraguan cigars:  The C-276. The C-276 will feature five filler leaves with two being ligero.

Nomad Cigar Company launched in 2012 with four sizes of classic hand rolled Dominican cigars and quickly grew the [DR] line to seven sizes. In January 2013 founder Fred Rewey ventured to Nicaragua; blending and creating the Estelí Lot 1386 and the S-307. In 2014 Nomad released the Connecticut Fuerte and will be releasing the C-276 at the 2014 IPCPR show.