The J. Grotto Anniversary: A Box-Pressed Double Robusto in Maduro

I’m a little behind schedule as we begin to bring more written content back into the Half Ashed equation.  This particular item from J. Grotto came through this past week…. 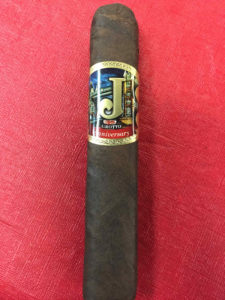 Ocean State Cigars has launched an addition to their J. Grotto Anniversary cigar line.  The extension is a 5.5″ x 54 double robusto, which comes pressed and adorned with a maduro wrapper.

The new Double Robusto brings the same blend and construction characteristics as the original four vitolas in the line.  The wrapper “is a naturally fermented maduro Connecticut-grown broadleaf, while the binder is a Dominican-grown Habano.”

The Anniversary line is being manufactured by Phil Zanghi at the De Los Reyes/Debonaire factory in Tamboril, Dominican Republic.  Aside from the factory, the Reyes family of tobacco producers lay claim to supplying the majority of tobacco used by Dominican cigar manufacturers.  Proprietor Paul Joyal is a bit secretive about the blend specifics, noting only that it is “Dominican and other Central American tobaccos.”  I recently had the opportunity to visit and sit down with Zanghi, and have to admit I was more than a little impressed with the factory’s efficiency, cleanliness and “family” work environment.

Like previous Anniversary vitolas, the Double Robusto is described as medium-bodied, which is a departure from other J. Grotto cigars, which the company markets as medium-full to full-bodied.

Joyal says that, “Although many cigar lovers rave about full-bodied cigars, most buy medium-bodied brands.  Make no mistake, Anniversary’s rich flavor is the full equal of highly-touted full-bodied cigars … many of which actually lack flavor, despite their power.  Anniversary has earned the term ‘succulent,’ with a classic Connecticut broadleaf sweetness, plus some subtleties like cocoa, coffee and nuts.  For smooth smoking, all tobaccos are aged at least 3 years; the finished cigars another 3-4 months.”

Each Spanish cedar box holds 10 cigars and bears artwork reflecting the special nature of the Anniversary line.  The line’s original 2014 debut marked a year of special wedding anniversaries for the Joyal family … his parents’ 65th and his 30th.  Gold coins in the art also bear the initials of immediate family members.  Joyal describes what he thinks is Anniversary’s most appealing feature: “super premium quality and performance at a consumer-friendly price … $8.50.”  Like all other J. Grotto cigars, the Anniversary Double Robusto is available only to brick-and-mortar tobacco shops … not Internet and mail-order discounters.