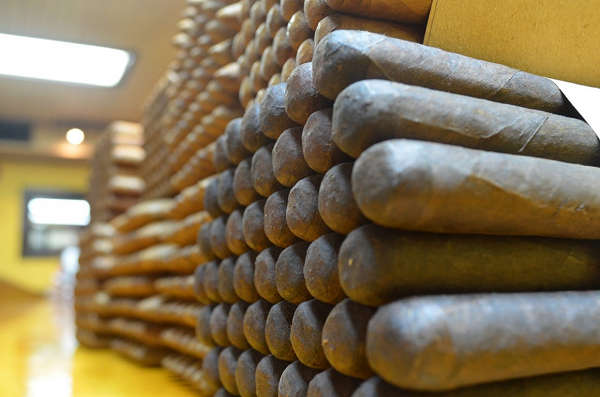 Kip – Crowned Heads Las Calaveras 2016 – I’m having the 5×50 edition of this year’s release. It has a Connecticut broadleaf wrapper over Nicaraguan fillers. Produced by My Father.  Based on my first experience, I’d liken it more akin to the 2014 version than 2015…which is great for me.
Craig – Diamond Crown 20th Anniversary  – A lovely gift from Kip that seemed like it was calling out to me this evening.

Recluse….9 new lines, with 14 sizes each?!?!?
Kings Cigars will be releasing some new limited editions…to the tune of 40 new facings in 14 different blends!

1502 has given some detail – but not much – on their latest release, the Blue Sapphire. I’ve been a fan of Enrique’s style since he first hit the shelves with the Ruby & Emerald several years ago. The Blue Sapphire will again be a Nicaraguan puro, but little is yet know about the blend outside of it being described as medium-full to full. It’s strange that so little detail sparks an interest from me, but knowing how much I’ve enjoyed his past efforts I’ll be excited to try this one.

Many listeners may not be familiar with El Artista, but I’ve lived just a couple miles from their factory the past year. The company is celebrating 60 years in business, although they don’t have huge name recognition in the American market. They do a steady business of house blends and a few others you may know like the Puro Ambar. I profiled them a few years back at the 2013 show. They have a long history in growing and buying/selling leaf, as well as making cigars. This year’s new release is the Pulita, which uses negrito wrapper, criollo 98 binder and fillers from the Dominican Republic, Nicaragua, Colombia, and Pennsylvania. The Aniversario will come in two sizes, a 5×50 Robusto and 6×54 Toro.

Celebrating a 10 year anniversary, illusione will have several changes in the works for this year’s show…but probably few will bring a tear to my eye like the fact that the eccj blend is going mainstream! The robusto, churchill, and corona gorda will become regular production items. Secondarily, my other favorite bit of news from Dion is that there will be a 5-⅝” x 46 Fume D’Amour called the Concepcion. Hoowahh!

One last item that has my knickers in a twist is the Yamasa from Davidoff. I’ll be attending a media gathering in their booth and the official launch at the opening of the Davidoff lounge in Vegas. This blend will feature tobacco from a region between Santo Domingo & Bonao in the Dominican Republic, where they have some limited tobacco crops. The region is known as Yamasa, where the cigar draws its name and wrapper. The binder will also be from here (San Vincente), and the filler will have tobacco from Condega and Estelí, Nicaragua and other Dominican tobaccos (piloto and mejorado). There’s been a good deal of science applied in their development of these tobaccos…as well as its treatment during processing. It’s available in Robusto (5 x 50), Toro (6 x 52), Pirámides (6 1/8 x 52) and Petit Churchill (4 x 48), and will retail between $13-23 per stick depending on size

What the frack is an “energy cigar?” The Nicaragua Cigar Distributors are banking on the energy drink phenomena with an entry this year. They claim to have infused FDA approved food grade components to provide a “boost” minutes after lighting the cigar. Interesting idea, or regulation-fodder? There will be a premium version as well as an inexpensive mass market short filler edition…

What have we been enjoying in the world of cigars lately?

Writing again! I’ve got a hankering to put a story idea down on paper. It’s somewhat autobiographical but more off, it’s a great accompaniment to the cigar.