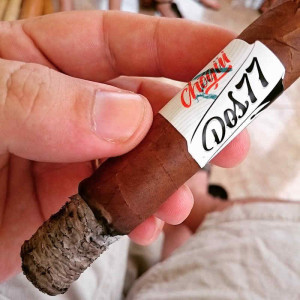 Tonight, we’re smoking the Chogüí Dos77 Rogusto (robusto+gusto, 5″ x 52).  It carries a “Havana seed” Dominican wrapper over Dominican Criollo ’98 binder and Habana 2020/DR Corojo filler.  An initial limited shipment has made its way to the US, although it was originally only available in the Dominican Republic.  Stateside, they retail around the $9 mark, and are available in Santiago for the equivalent of roughly $6.  I also recently reviewed the Dos77’s successor in the Chogüí PrimerAño.

Davidoff Tampa is finally opening….We originally talked about it months ago, and I believe the store was originally slated to open in October – but it was delayed until now.  The cigar retail portion of the 5,000 sq. ft. store is operating 9-9 for the time being, but once the bar area opens they’ll run until midnight weeknights and 2am on weekends.  The Tampa store is the 5th new storefront for Davidoff in the past year.  For those interested, the exclusive for this store is a 6”x52 belicoso.

John Gonzalez, formerly of Kuuts and My Father, has been appointed as VP of Sales for Gran Habano.  I met John when he gave me a quick tour through the My Father facility in Doral (Miami), and he was a supremely friendly and hospitable gent – and also very knowledgeable of the industry as a whole.  I just wanted to congratulate and wish him well with GH.

Casa Fernandez AGANORSA Leaf….Craig is wrong on this one :)

In the next episode (136), we will be smoking the Partagas Maduro #1.  So come by Friday night and hang out with us in the chatroom during the show.  If you would like to contact us in the meantime, you can reach us via the Contact Page or the following emails:[email protected] or [email protected]  Please feel free to drop us a line if you have any questions you’d like answered, comments to make…or even compliments and complaints.  We love to get your emails!  Also, remember you can always go back and listen to previous episodes, which can be found in the Half Ashed Archive.  You can download this week’s audio directly below (right-click “Download” and save), find us on iTunes, or subscribe with any podcast app at our RSS Feed.  Video, as always, will be available at the Half Ashed YouTube Channel.