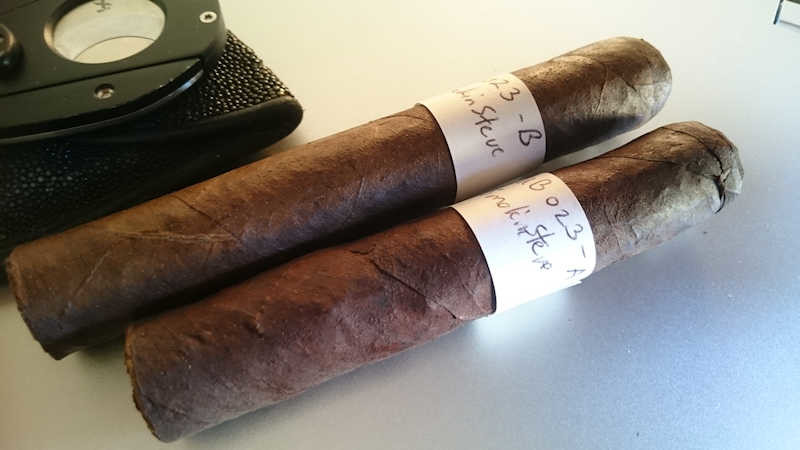 Unbanded B – 5” x 50; dark wrapper with a more noticeable oily sheen than “A”; sweeter foot aroma

Quesada will be continuing their limited Seleccion Espana limited release for a dozen retailers for 2016 – this time, however, it’s in an “A”-ish vitola (8.5” x 48)….sorry, Craig. Each retailer will still receive 100 cigars, but in 10-ct boxes rather than the 50 or 100 count crates from the past.

Davidoff sent out a press release earlier this week, detailing that they will be releasing a couple box pressed vitolas in their Nicaragua line.  The sizes will be a 5”x48 robusto and 6”x52 toro, which differ slightly from their non-pressed counterparts in the regular line (5×50 and 5.5×54).  They also list a Nicaraguan habano oscuro as the wrapper, rather than the “Nicaraguan rosado” given for the standard issue Nicaragua.  No details were given as to pricing, but the new sizes should ship in March.

AJ Fernandez has suffered a fire at their Nicaraguan operations over the Christmas holiday.  On Christmas Eve, news spread of the fire – which, according to the local news agency Telenorte, destroyed several tobacco barns and farming equipment.  There have been mixed reports of the monetary loss, with some estimates coming in at over $1mm US.  Reportedly, the factory proper was not impacted…but a large supply of raw leaf was burned.  Telenorte has also reported that an employee has been detained for questioning in the fire.

Fuente’s now-annual “Unnamed Reserve” release has hit retailer shelves.  As was the case once before, it has been delivered in two differing vitolas within the same box this year – a 5.5” x 48 robusto and 6” x 50 toro.  There are 10 of each size included per box, with retail set at around $325 per box (just over $16 per cigar).

In a move that was unexpected to me, Nate McIntyre posted a notice via Facebook today that he has resigned his position at Cubanacan.  Well wishes his way for his future endeavours…

Club Havana Corona Especial (Laguito 2) – These are really coming around at 1 year old. I love the blend and thought this size might not be the best representation. One smoked last week makes me think they just needed to come out of their mini-funk.

Tat Belle Encre Reserva – I talked about these a few shows back and I’ll say the same again. Not ready.

In the next episode (135), we will be smoking the Chogui Dos77.  So come by Friday night and hang out with us in the chatroom during the show.  If you would like to contact us in the meantime, you can reach us via the Contact Page or the following emails:[email protected] or [email protected]  Please feel free to drop us a line if you have any questions you’d like answered, comments to make…or even compliments and complaints.  We love to get your emails!  Also, remember you can always go back and listen to previous episodes, which can be found in the Half Ashed Archive.  You can download this week’s audio directly below (right-click “Download” and save), find us on iTunes, or subscribe with any podcast app at our RSS Feed.  Video, as always, will be available at the Half Ashed YouTube Channel.