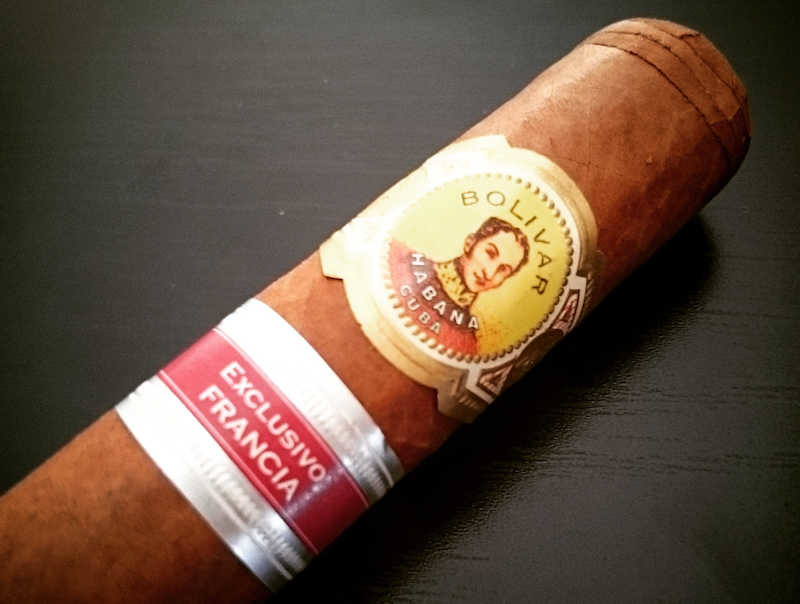 This cousin of the CotW from episode 131 is an even larger cigar, coming in 54x 6-1/2” – the Bolivar Libertador ER Francia. We put off smoking this cigar previously because multiple samples smoked by us collectively were obviously in a transition phase. After 4 additional weeks of rest we’re revisiting in an attempt to complete this mini vertical review. The Libertador is a French regional release from 2006 and a highly anticipated cigar at the time. Both of these were large ring Boli’s but the French variant was a significantly milder cigar 9 years ago. Bolivar is known for earthy, tobacco centric flavors and this cigar always just hinted at that. Today, we’ll see how nearly 10 years of box time has molded what this cigar has become.

Commissioned by the French Habanos distributor, the Libertadores are the largest ring Bolivar to ever be produced.

The Regional Editions began after the success of two specially commissioned cigars in 2004. The reintroduction of the famous Bolivar Gold Medal and a VR called the Jubileum were released in Germany to critical and market success. Habanos capitalized on this success with three REs in 2005 and exponentially more in the years following.

Villiger made a sudden move this past week, unexpectedly terminating most all of their US based sales employees.  In information subsequently provided, the company says they will be moving their American headquarters to Miami and – at least in the interim – will be going to a broker/inside sales arrangement for their US distribution.  Finally, they will be appointing a new GM stateside, although they chose not yet to name who that is…but judging by some of the retailer backlash I’ve seen online I’d say he/she will have their hands full.

Legislatively, there was a sliver of hope followed by the agony of defeat this week for cigar smokers.  The Omnibus Spending Bill, which outlines which programs will be receiving monies for the upcoming budget cycle, had a rider attached that would have protected premium cigars from FDA control – but the measure was stricken from the bill before passage.  Despite there being little chance of it making it through, many in the industry were optimistic that it would.  No protections were included in the final bill, so now we wait for the Office of Management and Budget to evaluate the FDA’s intent and figure out what the ramifications would be.

To the dismay of many, halfwheel is reporting that Pete Johnson has revealed to them that Tatuaje will be discontinuing single store releases, citing “factory constraints and production limits.”

Guayacan will be moving into new digs come January 1.  In a partnership with Brandon Hayes of Renegade Cigars in Texas, the New Order of the Ages factory will be opened in Estelí.  Guayacan previously split from their previous partners over the past year.

In the next episode (134), we will be smoking Unbanded #023, from S. Dunlap.  So come by Friday night and hang out with us in the chatroom during the show.  If you would like to contact us in the meantime, you can reach us via the Contact Page or the following emails:[email protected] or [email protected]  Please feel free to drop us a line if you have any questions you’d like answered, comments to make…or even compliments and complaints.  We love to get your emails!  Also, remember you can always go back and listen to previous episodes, which can be found in the Half Ashed Archive.  You can download this week’s audio directly below (right-click “Download” and save), find us on iTunes, or subscribe with any podcast app at our RSS Feed.  Video, as always, will be available at the Half Ashed YouTube Channel.