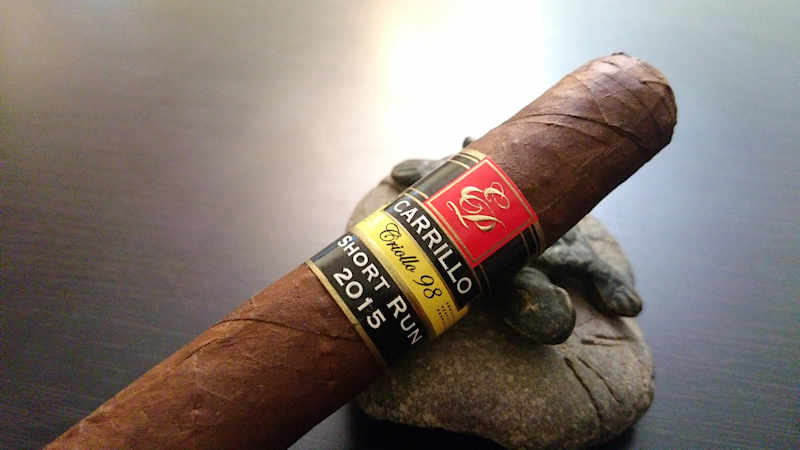 The 6th in the series, this year’s EP Carrillo Short Run comes with a Nicaraguan (Jalapa) Criollo ’98 wrapper, Nicaraguan binder, and Nicaraguan/Dominican filler components.  It is available in 3 vitolas – the Napoleon (5″ x 50), Imperios (6″ x 60), and tonight’s featured cigar, the Vencedor (6″ x 52).  Depending on size, the MSRP runs from $6.75-8.75 for the line, and production was capped around 1,500 boxes of 24 for each vitola.  I enjoyed these when they first hit the shelves in March/April 2015, and thought them worthy of a spot as a featured Cigar of the Week.  Tune in to see how it went!

Ernesto Perez Carrillo is releasing some of his personal blends to the marketplace.  The line, called “Ernesto’s Humidor” will initially be comprised of three blends – with CT, Sumatran, and CT Broadleaf wrappers.  Ten each of the three blends will be packaged in a humidor, with the total package retailing for $395.  Only about 500 humidors will be produced.

Continuing with our year-long pattern of these PSA’s, the November box of Quesada España Petit Belicosos is going to McCoy’s Fine Cigars in Houston, TX.

As we’ve mentioned over the past few weeks, we have more news from Chogui.  First, the PrimerAño is nearing commercial availability, although it will only be a Dominican release.  I had the chance to smoke & review these, which you can find on Half Ashed.  Also, the initial shipment of the company’s core Dos77 line has reached American shores.  Owner Victor Nicolas is in New York for a launch event….look for them on shelves.  I’ll vouch for them…..  The Dos77 is 5×52, and is a Dominican puro with a criollo 98 binder and Habano 20/20 & corojo filler.  Wrapper details are a bit fuzzy, with its only description being “havana-seed Dominican grown.”

The 2015 Mason-Dixon Project from Crowned Heads is here.  This year, the line continues to be produced by My Father in Estelí, with the “North” featuring an Ecuadoran Habano wrapper over Nicaraguan binder/filler.  The “South,” however, has a CT broadleaf wrapper over Nicaraguan fillers/binder.  There are about 1500 boxes of 20 for each 6×52 offering, and will be available regionally based on their names.  Last year, retailers were known to do some trading across the border if you’d like to give both a try….

Cohiba 30th Anniversary Dalia (Jar)– Next year is the 50th anniversary of the Cohiba line. This cigar was released to celebrate the 30th. If I didn’t know for sure it was 20 years old, I would never have thought it was. This cigar had more “ability” than any I’ve ever smoked. It was full of beautiful cohiba grassy flavors and an unbelievable, rich dark depth that bordered on earthiness. That is a new flavor experienced in pre-Medio Tiempo releases. Splendid

Pre Revolution Don Alfredo 53 – I purchased 4 of these cigars for an unbelievable price years ago. They were opened as a box split from a well known, and well trusted collector. The cigar had body that was unquestionable and flavors that were reminiscent of well mingled Partagas of days past. It had strength & complexity that was fulfilling beyond my wildest dreams. It was not perfect. It was forever memorable.

Cigars from the Campo….tune in for my adventures in the campo…

In the next episode (131), we will be smoking the Bolivar Libertadores RE Francia.  So come by Friday night and hang out with us in the chatroom during the show.  If you would like to contact us in the meantime, you can reach us via the Contact Page or the following emails:[email protected] or [email protected]  Please feel free to drop us a line if you have any questions you’d like answered, comments to make…or even compliments and complaints.  We love to get your emails!  Also, remember you can always go back and listen to previous episodes, which can be found in the Half Ashed Archive.  You can download this week’s audio directly below (right-click “Download” and save), find us on iTunes, or subscribe with any podcast app at our RSS Feed.  Video, as always, will be available at the Half Ashed YouTube Channel.