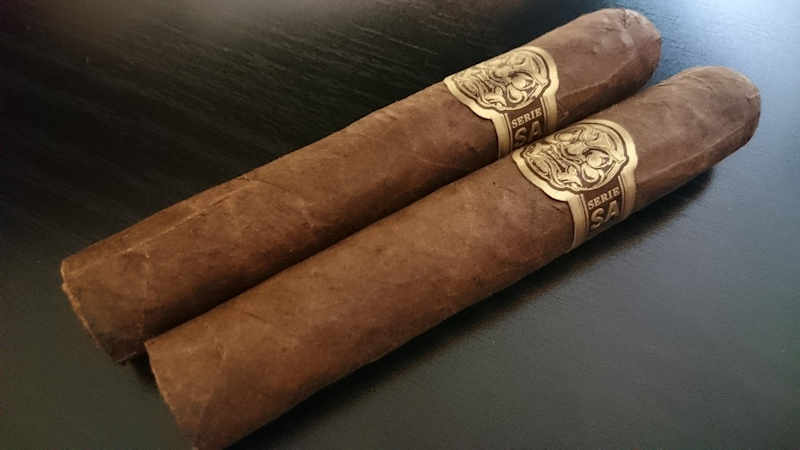 The Room101 Serie SA (San Andres) comes with a natural San Andres wrapper over Honduran binder and Dominican/Honduran filler mix.  Tonight, we’re smoking the “Papi Chulo” vitola, which measures a diminutive 4″ x 42 and goes for about $5 per stick.

In a press release earlier in the week, it was announced that Padilla and La Aurora had reached an amicable agreement over the use of a lion in respective branding.  Padilla will cease to use the existing lion on some of their materials, but will be allowed to use an “abstract lion.”  La Aurora claims to have used the symbol for over 85 years, and that it identifies their products in the marketplace.  Padilla will also be allowed to sell current stock – although the release did state “non-tobacco materials.”  Honestly, I’ve personally confused the Padilla bands from a distance…

A shop from my old stomping grounds in Farragut (West Knoxville), TN – Silo Cigars – has been chosen to receive the next shipment of Quesada España Petit Belicosos.

In a story Craig is sure to be excited about [/sarcasm], Casa Fernandez has begun shipping the annual limited release of the Aniversario Series.  This year, it’s available in two vitolas, including a 7.5”x40 box pressed lancero and 6×56.  The line contains the same blend as last year’s cigar, featuring all AGANORSA tobacco.  Total combined production will be about 15,000 cigars, heavily weighted on the 6”x56 vitola.

We spoke of it a few weeks ago, but the Jericho Hill “Twelve Honest Men” lancero has begun to hit retailers’ shelves.  It’s 7.5”x38, and retails for $9.95.  Total production of 3,500 boxes of 12.  Like the rest of the line, it has a Mexican SA wrapper over Nicaraguan internals.  Produced by My Father.

In the next episode (129), we will be smoking an Unbanded: #025, from Dan C.  So come by Friday night and hang out with us in the chatroom during the show.  If you would like to contact us in the meantime, you can reach us via the Contact Page or the following emails: [email protected] [email protected]  Please feel free to drop us a line if you have any questions you’d like answered, comments to make…or even compliments and complaints.  We love to get your emails!  Also, remember you can always go back and listen to previous episodes, which can be found in the Half Ashed Archive.  You can download this week’s audio directly below (right-click “Download” and save), find us on iTunes, or subscribe with any podcast app at our RSS Feed.  Video, as always, will be available at the Half Ashed YouTube Channel.