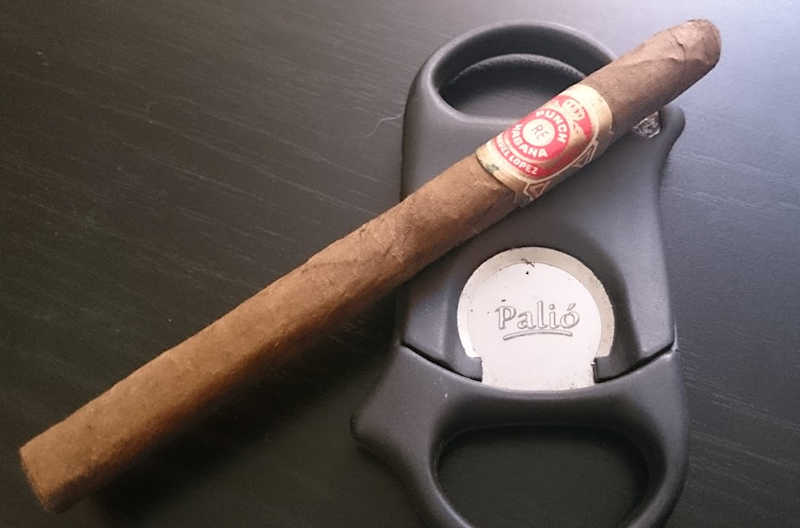 Boxcode: NISV – December of 1993 these little cigars were boxed and headed out of the factory. They’re a “Carolinas” vitola, coming in at an odd 26×4-¾”. This box has been open for a couple of years but the unique “Punch” flavors have morphed more into a basic “Vintage” tobacco flavor. The nuance is gone but the suave character is certainly there in spades. We’ll be smoking a new(er) punch coming up in near future and it’ll be interesting to see if Kip can spot any of the hallmark flavors in that which he detects in this more mature stick. I went through a phase where small sticks were what I always reached for first. They fit the bill whether short on time or looking for variety. It’s not too uncommon to be able to finish 2 of these in an hour.

Fresh on the heels of our smoking the Crowned Heads’ Jericho Hill OBS last week, we now know that they will be releasing a lancero in the line.  The “12 Honest Men” will be a 7.5” x 38 with similar blend to the remainder of the line (Mexican San Andres over Nicaraguan binder & filler).  It is, at least initially, limited to 3,500 boxes of 12 (42k total production) and will retail for about $10.  It should begin shipping within the next few weeks.

Continuing with the Crowned Heads theme, they have released some information about one of next year’s new introductions: Las Mareas (the tides).  It will be available in four vitolas (6 1/8 x 46, 4 1/2 x 48, 5 1/2 x 52 and 6 x 54).  The company is shipping one box of each size to seven selected retailers this week, but regular production will not be available until next Summer.

Freyja, Jose Blanco’s wife Emma Viktorrson’s creation, has begun shipping.  It has been available in parts of Europe for several weeks, but is just now reaching U.S. shores.  Emma has been forthright in saying that this is entirely her project with no blending input from  neither Jose nor Jochy Blanco.  It has a Dominican Criollo ‘98 wrapper over Mexican San Andres binder and fillers of DR Criollo ‘98, Dominican Piloto Cubano, and Estelian tobacco.  It is being produced in four sizes (5.75” x 42, 5.5” x 50, 6”x54, and a 6.5”x 52 figurado), and retailer from $7-10.  The theme is built around Emma’s native Swedish heritage and mythology – notably, the goddess Freyja, queen of the Valkyries.

Halfwheel is reporting some legislative news from El Cerrito, CA that should catch all our attention.  The city has passed some stringent new tobacco regulations, which ranges from designating where tobacco sellers can operate (within certain distances from schools and other retailers).  It bans outright the sale of flavored tobacco products, and the sale of single cigars under the $5 mark.  No new licenses will be granted to establishments that receive more than 50% of revenues, nor those that allot more than 20% of retail space, to tobacco products.  The new license will also cost retailers more than $400 per year to retain.

In the next episode (127), we will be smoking one of Kip’s selections, the L’Atelier Cote d’Or.  So come by Friday night and hang out with us in the chatroom during the show.  If you would like to contact us in the meantime, you can reach us via the Contact Page or the following emails: [email protected] or [email protected] Please feel free to drop us a line if you have any questions you’d like answered, comments to make…or even compliments and complaints.  We love to get your emails!  Also, remember you can always go back and listen to previous episodes, which can be found in the Half Ashed Archive.  You can download this week’s audio directly below (right-click “Download” and save), find us on iTunes, or subscribe with any podcast app at our RSS Feed.  Video, as always, will be available at the Half Ashed YouTube Channel.