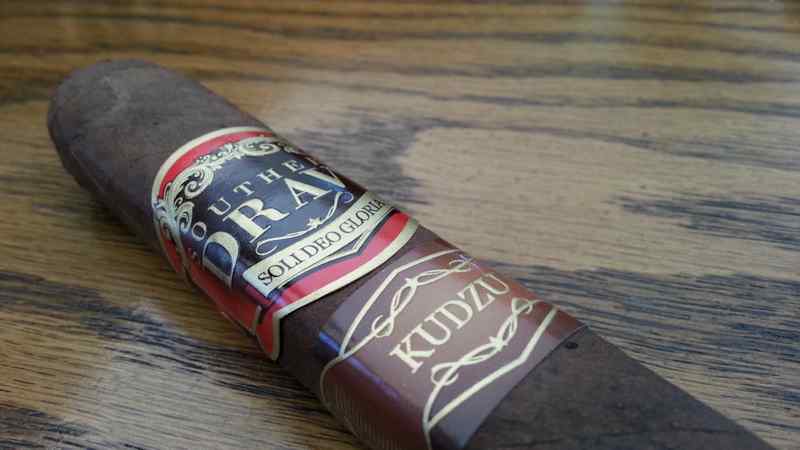 Welcome to episode 112!  This week, we have guest Robert Holt of Southern Draw Cigars.  Tune in as we chat with Robert about his cigars, the philosophy behind the brand and blending, as well as a few off-topic rabbit trails.  We had a fantastic time…all while smoking the Southern Draw Kudzu. Tonight’s stick is the 6″ x 52 toro, featuring Nicaraguan internal components wrapped in a Nicaraguan Habano Oscuro wrapper leaf.  The Kudzu is softly pressed, with moderate tooth and beautiful dark chocolate-brown coloration throughout. It also has an element I increasingly enjoy for lighting purposes – a closed foot, which makes lighting a breeze. Besides the toro, it is also available in a 5.5″ x 54 robusto and 6.5″ x 60 Gordo. Tune in to see how it went!

Big news today from House of Emilio.  Founder Gary Griffith has left the company, per a statement from them on social media this afternoon:

Today’s post is to inform our friends in the cigar industry about the retirement of Gary Griffith from Emilio Cigars, House of Emilio, and Delaware Cigars.  Gary was a visionary and a social media marketing pioneer. His time with us was filled with laughter, caring, and many great cigars.  Going forward, his legacy will continue through the brands he’s helped, the distribution company he led, and the cigars that he blended.  We wish him all the best in his future adventures!

So…what does this mean?  Nate McIntyre left a few months back, and I’m not even sure who is left to take the helm.  I know they have several sales folks at this point, but I don’t know who is in a position to continue on.

Yesterday, we learned of that 4 Senators (including Craig’s own Dick Durbin) have proposed a NEW tax on tobacco products, including cigars.  The proposal would add $0.94 per pack of cigarettes and an “equivalent amount” on other tobacco products.  One of the specified goals is to make the taxation similar on all types of tobacco usage.  And…predictably….it’s “for the kids.”  Speculation is that the tax would add close to $1 to the retail price of premium cigars, depending on wholesale pricing.  While it isn’t expected to make it to law, some day it will likely do so should the environment shift….

Nicholas Melillo – aka Nick R. Agua – has been hinting around for weeks or even months concerning possible future involvement in the cigar industry post-Drew Estate.  He finally made it a bit clearer this week, with a post stating that “I don’t think there is any better way for people to understand my experience in Nicaragua than through a cigar and a brand, which i hope to debut this summer/fall. As I did with Drew Estate I am putting heart and soul into these new projects, because that’s the only way I know how to do it.”

In a story we didn’t get to last week, Davidoff will be mixing it up again – they will be introducing a Brazilian themed line.  It will be rolled in the Dominican Republic, and feature tobacco from the DR, Ecuador and Brazil.  Availability is limited to three vitolas – a 3.25” x 50 short robusto, 4.5” x 54 robusto, and 5.5” x 58 gran toro.  Pricing has not been released, but the smallest is expected to come in around the $10 mark.  The line should debut at this year’s IPCPR tradeshow.

isla del sol – What can I say about a sugar tipped cigar from my boss? The gift was a nice gesture while we were working together on site but the reality is not my style. A better quality wrapper would have been appreciated. As would no artificial additives to the wrappers head. The cigar had an enjoyable natural tasting sweetness that I did find palatable but I just can’t get over the sticky coating. My lips ripped the wrapper a quarter of the way in and I progressively had to pick pieces off of my lips. If I wasn’t frustrated continuously I would have enjoyed the experience a bit. It reminds me of something my dad would smoke. I’m sure I’d find myself smiling one day after he’s gone if I happened to light one of these up. Too bad it would be the type of laughter accompanying those frustrating moments in life that are so mundane they’re humorous.  I guess there’s something redeeming in everything if you look deep enough.

Tatuaje “Hassell” from 2013 SNS pack.  Incredibly sweet aroma off the foot; The initial puffs were wildly entertaining – dark and chocolatey; lots of early sweetness with dark, cherry flavors.  From midpoint on, I got a peculiar and unique flavor – hoarhound  candy, or even root beer.  One of the best cigars I’ve had this year….wish there were more.

Ortega “Cubao” – A couple years ago, when Eddie re-introduced these, I really enjoyed them.  They had lots of bright, approachable spice and just enough of a kick to stay interesting.  They seem to have maintained all their strength but lost some flavor.  It seemed a bit out of balance; definitely tilted toward strength on the ol’ scale.

Some Fuente prototype from CFC2012.  I love Fuente.  I truly do…but I was left a bit disappointed by this one.  It began with delicious, sweet toasty goodness.  But around the midpoint, it became increasingly hard to get smoke from it – and the flavor went a bit more vegetal than I’d typically prefer.  At first I wished I knew what it was and how to get more…but by the end I didn’t really care.

Next episode (113) we will be featuring the Davidoff Nicaragua short corona, with special guest Dale Roush.  So come by Half Ashed Friday night at 9:30pm EST and hang out with us in the chatroom during the show.  If you would like to contact us in the meantime, you can reach us via the Contact Page or the following emails: [email protected] or [email protected] Please feel free to drop us a line if you have any questions you’d like answered, comments to make…or even compliments and complaints.  We love to get your emails!  Also, remember you can always go back and listen to previous episodes, which can be found in the Half Ashed Archive.  You can download this week’s audio directly below (right-click “Download” and save), find us on iTunes, or subscribe with any podcast app at our RSS Feed.  Video, as always, will be available at the Half Ashed YouTube Channel.

P.S. – If you have unbanded suggestions or contributions, you can get those to us by sending an email to [email protected]  This email address goes directly to my wife, so you can simply suggest an unbanded cigar for her to source, or send me [email protected] if you have something you’d like to send in.  I will provide an address to send them.  Thanks!