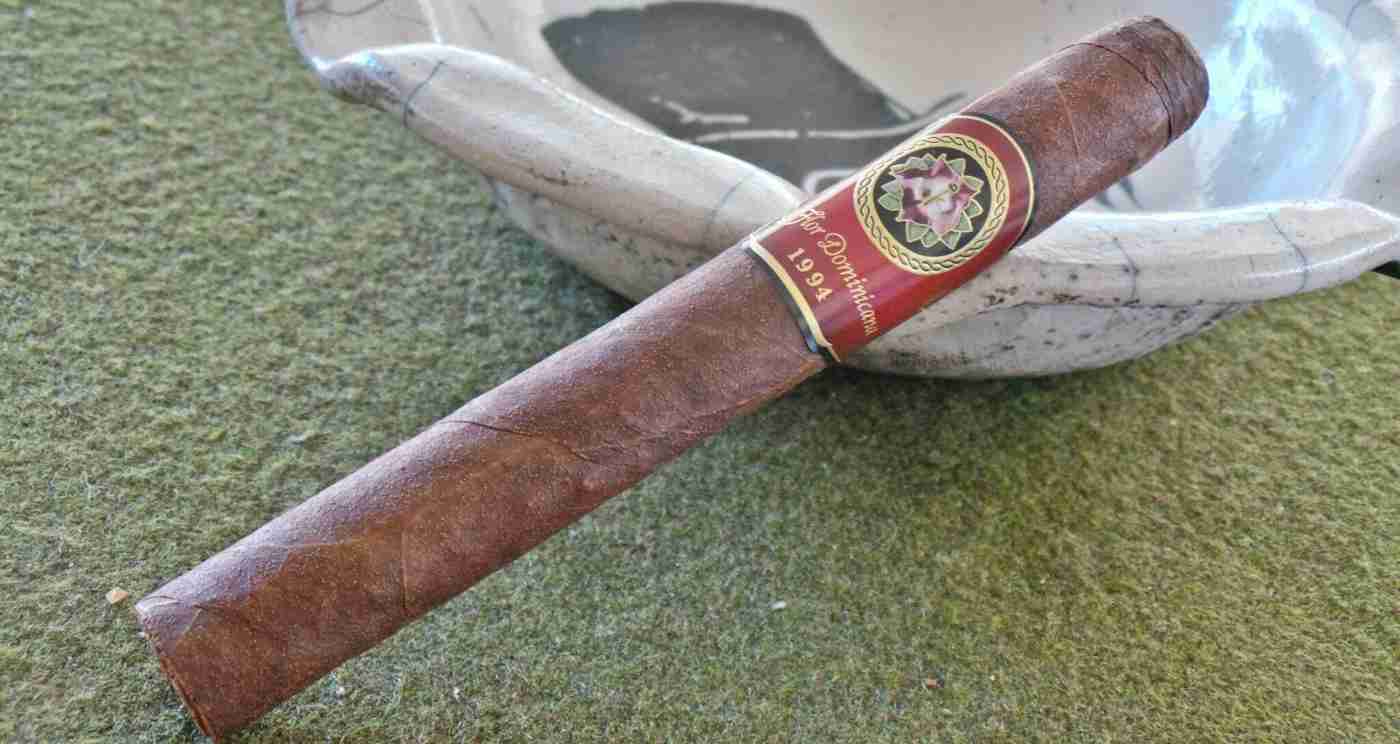 Welcome to Episode 105 of Half Ashed, featuring the La Flor Dominicana 1994 as our Cigar of the Week.  Here was my description for the cigar:

The “1994” was launched this past year to commemorate the Gomez’ family’s 20 years in the cigar business.  There are 4 vitolas in the regular production lineup (which is what we’re smoking tonight): Conga (5×52), Aldaba (6×58), Rumba (6.5×52) and Mambo (7×54).  There is also one 6×54 Limited vitola that shipped in beer steins.  Unlike the regular production, this version carries a maduro Mexican San Andres wrapper.  Tonight’s cigar, however, has a *natural* version of the same wrapper over Dominican binder and fillers.  After having smoked a dozen or so of these in its young life, I’ve had a strange wandering opinion of this cigar…..but more on that as the show progresses.  They range from $6.50-7.00 in the Tampa market in box quantities of 20.  The limited Beer Stein edition, if you can still find them, runs about $225 for the stein and 20 cigars.

From Jeff Borysiewicz: Big day for us at Corona Cigar and our Florida Sun Grown tobacco team. It’s been nearly 40 years since the last cigar leaf was grown in the Sunshine State. Willie Herrera and the Drew Estate team put together a pair of outstanding blends using ‪#‎Cuban‬ seed, Florida Sun Grown tobacco from our 2013 inaugural crop. There is less than 800 lbs of this unique tobacco so any cigars that use FSG will be a true micro blend in every sense of the word. We look forward to the near future when we can share these cigars and this fruits of our labor and dedication with other retailers and cigar aficionados PICTURE

Governor Tom Wolf of PA has proposed a $30 billion state spending plan  that would, in part, rely on hefty tobacco taxes for funding.  This would include a cigar tax at 40% of wholesale, in drastic contrast to the current status of having no cigar tax.  The plan includes a $1 per pack increase on cigarettes (from $1.60 to $2.60 per pack), and 40% of wholesale on smokeless tobacco, large cigars, loose tobacco and e-cigarettes.  The governor expects an additional $358 Million of revenue from the cigarette tax and $84 million from cigars and OTP.  The cigar retail industry currently thrives in PA, largely due to the fact that surrounding states’ higher tax rates have driven them to the state.  Retailers have pointed this out, and some report even considering a move to Florida should the tax be passed into legislation.  PA is home to large cigar retailers Famous Smoke Shop and Cigars International, as well as numerous other smaller retail operations. STORY HERE

Crowned Heads will be releasing another state-exclusive cigar, the Yellow Rose for Texas.  The blend matches that of previously released Tennessee Waltz – CT broadleaf wrapper over a Nicaraguan binder and filler blend.  It will retail for $9.50 per cigar, and only be available from Texas retailers with Crowned Heads accounts.  Shipping late March/early April

For the 6th year in a row, EP Carillo will be releasing a Short Run blend.  The line will be shipping some time in the next couple of weeks.  Unlike earlier iterations, the 2015 Short Run will feature a Nicaraguan wrapper – a 98 Criollo coming out of Jalapa.  The binder will be Nicaraguan and filler blend of Nicaraguan and Dominican leaf.  They will be delivered in 24 count boxes and three vitolas: 5×50 Napoleon, 6×52 Vencedores, and 6×60 Imperios.

Before the 10th installment of Smoke Inn’s Microblend Series has even shipped, the 11th has been announced.  It will be the Little Big Delicious, produced via Room101 for the series.  The blend will be the same as the Big Delicious from 2013, only shorter at 4.5”: Ec Habano wrapper over Honduran corojo binder and filler mix from Honduras, the DR, Brazil and Nicaragua.

There will be an extension to one of my favorites “go-to” cigars – the My Father Flor de las Antillas.  A maduro version is slated to be released at the 94th Anniversary party for Federal Cigars in New Hampshire.  The cigar will be in a 4.5”x50 vitola, and will be available in-store at the shop’s part March 14th, and on the website March 16th.  The original Instagram poster remarked that you won’t see the line again for the next year and a half after the celebration…

Quesada Espana Madness! CDM cigars and Federal Cigar are each getting their own special release of the Espana; a beli-lance for CDM (and a new and a Petit beli for the latter. Quesada also announced that a regular lance will be released again to Stogies in Houston. These are a “special” special release having been wrapped in a 3rd band specifically labeled H-Town to celebrate the shops great success and loyal following for the pencil sized vitola.

Habanos Man of the Year talk: Three awards were given for Habanos Man of the Year. Gary Heathcott, an American freelance writer who has supported humanitarian aid to Cuba and other Latin nations, won in the communications category; George Fereos, who owns and operates the Casa del Habano in Cyprus, won in the business category; and Rogelio Ortuzar, a Cuban farmer who has been producing tobacco for more than 40 years, earned the nod in the production category. From CA

Habanos news: The new Anejados are out; and they’re rather controversial. Word on the street is that they’re just a regular production cigar, picked out of the escaparate, and slapped with a special blend. RyJ Torpedo & Montecristo Churchill.

CroMagnon Breuil Panetela – Not my favorite vitola in the line. There were moments of that beautiful spicy sweet profile but it seemed somewhat ashy and overly peppery for my preference.

Room101 Big Payback – Underfilled with a squishy head.  The flavors were pleasant enough, though.  I just had to smoke it with kid gloves.   For $4.79 it was a respectable smoke….at $6+ I’d pass on it next time.  Healthy but manageable spice; entertaining core of black tea and leather.  A bit of a wonky finish though: long lasting but almost papery at times. [EDIT: In the final 3rd, became impossible to keep lit.  Bummer.]  The second I tried was markedly better, but I’d still be reluctant to pick up more….maybe.

Next episode we will be featuring one of Craig’s selections, the Quesada España Ninfa.  Be sure to tune in Friday night at 9:30pm EST and hang out with us in the chatroom during the show.  If you would like to contact us in the meantime, you can reach us via the “Contact Us!” tab at the side of this page, or at the following emails:[email protected] [email protected] Please feel free to drop us a line if you have any questions you’d like answered, comments to make…or even compliments and complaints.  We love to get your emails!  Also, remember you can always go back and listen to previous episodes, which can be found in the Half Ashed Archive.  You can download this week’s audio directly below (right-click “Download” and save), find us on iTunes, or subscribe with any podcast app at our RSS Feed.  Video, as always, will be available at the Half Ashed YouTube Channel.

P.S. – If you have unbanded suggestions or contributions, you can get those to us by [email protected]  This email address goes directly to my wife, so you can simply suggest an unbanded cigar for her to source, or send me an email to [email protected] if you have something you’d like to send in.  I will provide an address to send them.  Thanks!