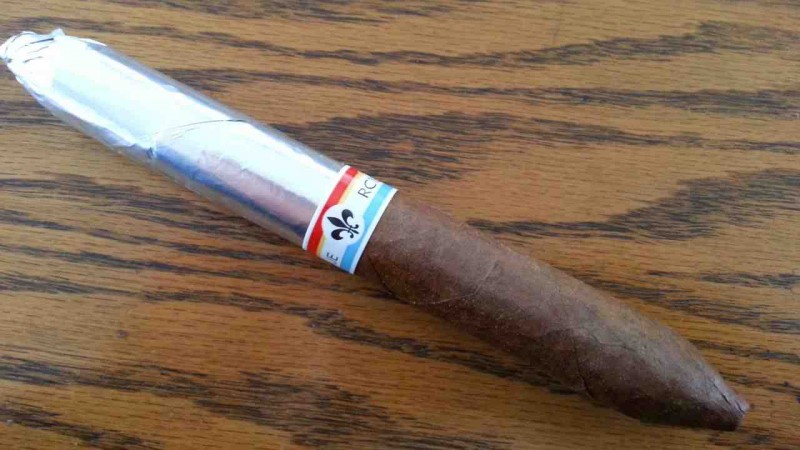 Good day, and welcome to Episode 104 of Half Ashed!  This week, we are featuring the Tatuaje RC184 as our Cigar of the Week, generously furnished by Craig.  Here’s his description of it:

The RC184 is a Salomon vitola from Tatuaje’s Reserva lineage. Checking in at 184 mm this behemoth is roughly 7-½”x57 and from a 2009 box I purchased shortly after being rolled. The cigar’s prefix stands for “Retro Cuban” and is an effective description of the suave style of flavors I typically attribute to Cuban cigars. Despite falling under the Reserva line of Tats, the blend does not venture far into the coffee and cocoa dominant world that many other Tat Reservas tend to reside in. Lovely orange peel citrus flavors accompany a light espresso core while being accompanied by terrific cherry notes and an occasional caramel sweetness. Despite having a reputation for being a ball buster, I don’t find them to be all too strong. A great, well rounded limited stick from Tatuaje.

(Maybe) the final update in Nebraska.  Governor Pete Ricketts, on the final day to do so, signed the bill allowing cigar & pipe smoking in cigar bars into law.  It was effective immediately, so light up Nebraska!  STORY HERE

Oettinger Davidoff announced today that they have acquired additional farmland in Jamastran (Honduras) and Condega (Nicaragua).  They have additionally purchased land near their box factory upon which to build a new factory.  Once the new factory has been completed, the existing one will be divested.  They have added about 150 hectares (~370 acres).  The new factory will be larger and help cover the 60% growth in production needs over the past few years.  Story via Cigar Journal

Tampa is getting a Davidoff store.  A big one.  According to the Tampa Bay Business Journal, Jeff Borysiewicz and wife Tanya will be opening the store late this year.  It will cover 5,000 square feet of space and be entirely humidifed.  As would be expected in this part of the world, it will feature both indoor and outdoor lounge space, as well as the typical lockers, and a full bar.  This is the fourth announced Davidoff store opening this year, along with others in Houston, Atlanta and Manhattan.

Pete Johnson has posted up that his TAA exclusive will make its 5th appearance later this year.  According to halfwheel, this year will be another re-release of the 2011 blend (hoowahh!), featuring a CT broadleaf wrapper in a single 5.625 x 54 vitola.

Speaking of halfwheel, they did an interesting piece this week after Habanos S.A. made some (very) bold claims about their expectations for the American market once the embargo lifts.  HSA execs claim that they believe they can conservatively capture 25-30% of the American market very quickly, and further stated they would take 70% of the market over time.  Considering the fact that Cuba would have to immediately grow production by about 50% of 2013 levels to even get into the 25-30% ballpark, I’m pretty doubtful those numbers would bear out….or if they do, I’d imagine we’d see some other issues with the product.

Guest on our celebratory 100th episode, Colin Ganley, just received a major nomination in the world of cigars, The Habanos Man of the Year. Typically awarded at the Habanos festival closing Gala, the award represents an individual’s contributions to the world of CUban Cigars. Good for Colin. More to come after tonight’s ceremony.

United Cigar “Garofalo” – this cigar put my review format to the test.  Connecticut wrapped cigars are not typically in my wheelhouse – and neither are most Perdomo offerings (the blender, or at least leaf supplier, of this cigar).  Trudging ahead, I found it still to be an entertaining cigar.  In fact, I would even consider keeping a few around if the opportunity presented itself.  For CT fans, it’s definitely worth checking out at its low pricepoint of $6.79.

illusione ECCJ 20th.  My last of these before they’re on the show…but I’m digging them.

La Hoja Autentico maduro (original from 2yr ago).  This fell a bit flat for me.  Extremely flaky ash; “plain” flavors that leaned on ashy at times throughout the smoke.  I’m not sure if the blend has changed on their re-launch following the trademark issues with the name Flores, but if it hasn’t these are definitely not appealing to me with a $14.50 price tag…

Next episode we will be featuring one of Kip’s selections, the La Flor Dominicana 1994.  Be sure to tune in Friday night at 9:30pm EST and hang out with us in the chatroom during the show.  If you would like to contact us in the meantime, you can reach us via the “Contact Us!” tab at the side of this page, or at the following emails:[email protected] [email protected] Please feel free to drop us a line if you have any questions you’d like answered, comments to make…or even compliments and complaints.  We love to get your emails!  Also, remember you can always go back and listen to previous episodes, which can be found in the Half Ashed Archive.  You can download this week’s audio directly below (right-click “Download” and save), find us on iTunes, or subscribe with any podcast app at our RSS Feed.  Video, as always, will be available at the Half Ashed YouTube Channel.

P.S. – If you have unbanded suggestions or contributions, you can get those to us by sending [email protected]  This email address goes directly to my wife, so you can simply suggest an unbanded cigar for her to source, or send me an email to [email protected] if you have something you’d like to send in.  I will provide an address to send them.  Thanks!