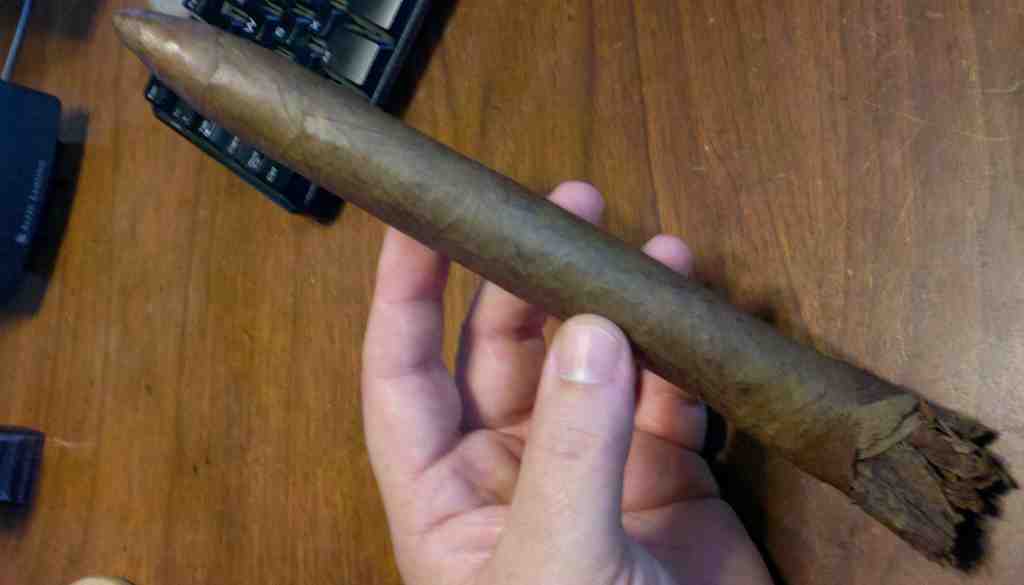 *I failed to take a pic of tonight’s 6.25″x52 torpedo, so enjoy this picture of a giant stick made by my buddy Arnold!

Welcome to Episode 101, featuring our 20th Unbanded cigar, suggested by listener Steve McHenry (Thanks Steve for the submission…tune in to see how it went!).  This Unbanded was a bit of a surprise to both of us at the grand reveal.  I don’t believe either of us had any familiarity with the cigar, and I think it shows :).  Give a listen and find out what this 6.25″ x 52 beauty turned out to be!

In the news, we covered several items, including the following stories:

Well, I suppose it had to happen some time. Christian Eiroa put up a pic this week for an 8”x80 behemoth coming from Asylum. Madness.

The follow up to a cigar we’ve featured – the eccj from illusione – is out nationally. The eccj 20th shipped this past week. 6.25”x48 with Nicaraguan Corojo 99 wrapper over Nicaraguan Criollo 98 & 99 fillers. 15 count boxes with an MSRP of about $12/stick.

HB1590 in VA looks to increase various tobacco taxes, including an increase from 10% to 60% of wholesale on cigars! That will basically make Virginians’ $10 cigars jump to $15! It includes several other complex increases on loose tobacco and cigarettes, but I knew a healthy number of the audience calls VA home and would want to know they’d better contact the reps….**UPDATE** Virginians dodged a bullet. This bill was tabled on Wednesday, which effectively kills it….for this session. I little doubt it won’t resurface soon.

In what’s a clear pattern with Crowned Heads, they have another LE coming soon. Some time between Feb-March, they’ll be releasing a 6×38 petit lancero called the Single Action. It will be an extension of the JDH Reserve line, and only have a production run of 2000 boxes of 10. MSRP is at $9.25/stick. Brazilian Aripiraca wrapper over Ecuadoran Sumatran binder and Nicaraguan fillers.

While I’m not a huge Viaje fan in general, I do love their SuperShot series, which hasn’t been shipped since 2013. Well, it’s coming back and will be shipping to retailers this week. This time, there is no Corojo version; only the Criollo. It comes in two sizes: the 10 Gauge (3.5”x54) and 12 Gauge (3.25”x52). I’m a sucker for the shotgun shell box-packaging on this line as well as the cigar itself….

Officer Paul gave us an update on my advice for rehydrating some pipe tobacco from a couple weeks ago:

Next episode we will be featuring one of Craig’s favorites as our Cigar of the Week – 2005 Vega Robaina Farm Rolled.  Be sure to tune in next week [monitor our Twitter/FB feeds for exact time this week; I’ll be traveling and unavailable during normal recording time].  If you would like to contact us in the meantime, you can reach us via the “Contact Us!” tab at the side of this page, or at the following emails: [email protected] [email protected] Please feel free to drop us a line if you have any questions you’d like answered, comments to make…or even compliments and complaints.  We love to get your emails!  Also, remember you can always go back and listen to previous episodes, which can be found in the Half Ashed Archive.  You can download this week’s audio directly below (right-click “Download” and save), find us on iTunes, or subscribe with any podcast app at our RSS Feed.  Video, as always, will be available at the Half Ashed YouTube Channel.

P.S. – If you have unbanded suggestions or contributions, you can get those to us by sending an email [email protected]  This email address goes directly to my wife, so you can simply suggest an unbanded cigar for her to source, or send me an email to [email protected] if you have something you’d like to send in.  I will provide an address to send them.  Thanks!