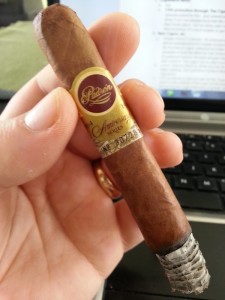 Hello again, and welcome back for Half Ashed Episode 013.  This week’s episode features the 2005 Padron Aniversario 1964 natural corona as our Cigar of the Week.  This cigar, one with which I am not overly familiar in the natural wrapper, turned out to be a phenomenal smoke.  These were graciously furnished by Craig, and I was entirely impressed, to say the least.  Tune in to get our combined thoughts about how this stick has held up during the past 8 years.  I will also be posting an Epilogue review within the next couple of days.  Once posted, this will be linked below.  Following is a brief summary of some show topics.

The American Association for Cancer Research has come out in opposition to the current CRA-endorsed legislation and has issued a letter to every member of the House & Senate stating such.  This is not surprising, but some of the numbers given in that letter were (to me, anyway).  We talk a little about some of the information in this letter, and some conclusions from it.

We also covered a number of announcements for new cigars, as well as our thoughts about limited, event-only cigars that have been subsequently released into regular production….and a few other items in cigar news recently.

What Else Have We Been Smoking?

We cover several listener emails this week, including some follow ups to recent discussions on one gentleman’s discomfort from his cigars and more coffee recommendations.

Next week, we’ll have the Ezra Zion crew as special guests, and be taking a look at their new Limited Edition TANTRUM.  That will be a LIVE show, broadcast at 9pm Eastern on Cigar Federation (complete with live chatroom so you can interact with the guys and ask any questions you may have for them), so be sure to tune in to find out how that goes.  The following week, we will have another special guest – William Cooper (Cigar_Coop) to get his insights into the industry, how it’s going, where it’s going, and generally pick his brain and see what we can learn.

Again, thanks for tuning in, and be sure to check back next week for an exciting Episode 014.  In the meantime, if you would like to contact us you can reach us through the contact page or at the following email addresses: [email protected] or [email protected]  Don’t forget to get those emails in this month to be entered in our current giveaway.  Also, remember you can always go back and listen to previous episodes, which can be found in the Half Ashed Archive.  You can download this week’s audio directly below (right-click “Download” and save), or find us on iTunes.  Video, as always, will be available on Cigar Federation.