Episode 012 of Half Ashed is in the can, and we welcome you back to join us for this week’s show.  We are offering up another opportunity to humble ourselves in the public eye this week, with Unbanded 003, generously provided by Dan Crouch.  Smoking blindly is something that is becoming somewhat of a habit for me.  Be sure you give us a listen by any of the means below for several news items and updates, what we’ve been smoking, what we thought of the unbanded selection this week, a couple listener emails, and a slight rant from me.  Also, don’t forget to listen in and check out the details on our current giveaway.  Thanks for stopping by!  Here is a quick show summary: 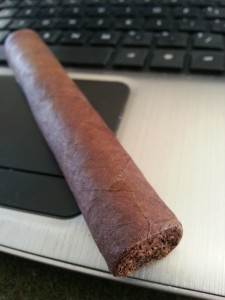 The Cigar of the Week for Episode 012 is an Unbanded submission from Dan Crouch.  Dan took a novel approach with this submission; something that is a little different than our normal format.  He submitted two differing vitolas from the same line of cigars, rather than two examples of the same cigar.  Craig and I both had similar notions about the origin of the cigars, as well as a clear preference for one vitola over the other.  Definitely an interesting experiment, and we thank Dan for the originality and generosity of supplying the cigars.  Check out the show to see what we thought of it, and get the reveal.

What Else Have We Been Smoking?

Next week, our featured cigar will be the 2005 Padron Aniversario Natural.  Be sure to tune in to find out how that goes.  On May 10th, we will have our next LIVE show, broadcast on Cigar Federation.  We’ll be talking with special guests from Ezra Zion about their Limited  Edition release  – the TANTRUM.  The following week, we will have another special guest – William Cooper (Cigar_Coop) to get his insights into the industry, how it’s going, where it’s going, and generally pick his brain and see what we can learn.

Again, thanks for tuning in, and be sure to check back in next week.  In the meantime, if you would like to contact us you can reach us through the contact page or at the following email addresses: [email protected] or [email protected]  Also, don’t forget you can always go back and listen to previous episodes, which can be found in the Half Ashed Archive.  You can download this week’s audio directly below (right-click “Download” and save), or find us on iTunes.