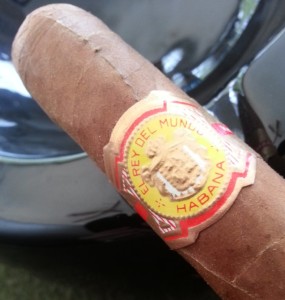 Welcome back to another episode of Half Ashed, everyone!  This week, we feature a 2002 El Rey del Mundo Taino as our CotW.  Hopefully have most of our audio difficulties resolved and offer you a better-sounding show.  You can find a brief summary of some items we cover in this week’s episode below, as well as instructions for finding the video and audio in the final paragraph.    Sometime during the next couple of days, I will also post my Epilogue review into this summary as well (so check back by for that).  Thanks for checking in, and be sure to send us a note if you have any comments, questions, concerns…or even complaints.  We may not have a solution, but we’ll certainly have an opinion…

This week’s featured cigar is the 2002 El Rey del Mundo Tainos, generously provided by Craig.  Here are his brief preliminary notes and history with this cigar:

Craig: The king of the world, as its name translates, is the king of many serious smokers’ worlds.   A unique blend giving flavors of tea, honey, cream, sweet tobacco….and heaven. It has been produced in Havana for well over 100 years. Typically mild in strength and perhaps medium in body (as a general, not definitive rule) these cigars are as full flavored as can be. Incredible complexity and very specific flavors generally render them somewhat polarizing, but those who love them, often keep them at the top of their list. The Tainos was discontinued in 2002, partly because of its contradictory appeal (mild but large) and potentially also because of its unique packaging. A slide lid cedar box packaged in a 13/12 format. Beauty in a 12×12 box.

Tune in to the show to both of our detailed opinions of the Tainos.

What else have you been burning?

We talk a good bit about an interesting email we got from Derek Matthews, referencing the impact cellophane may contribute to the process of tobacco aging.

Next week we feature the Tatuaje LE Mexican Experiment as the Cigar of the Week – one of Kip’s favorite cigars from 2012. Michael Stewart will not be able to sit in on the live show, but depending on scheduling we may have another very special guest with us to talk about his new cigars…stay tuned for that!

Again, thanks for tuning in everyone.  Be sure to come back next week, when we’ll be taking a look at the Mexican Experiment.  In the meantime, if you would like to contact us you can reach us through the contact page or at the following email addresses: [email protected] or [email protected]  Also, don’t forget to go back and listen to previous episodes, which can be found in the Half Ashed Archive.  You can download this week’s audio directly below (right-click “Download” and save), or find us on iTunes.  Video, as always, will be available on Cigar Federation’s website, as well as the Cigarmy YouTube Channel.