This week on Half Ashed, we’re joined by our old friends Bob McDuffee and Dale Roush, formerly of Dogwatch Cigar Radio.  Bob and Dale provided 410 Episodes of the first, longest-running cigar podcast in history.  Dogwatch was the context through which Craig and I met, and its much lamented conclusion was the impetus for the two of us to pick up the mantle and try to preserve the community it fostered – all the while (hopefully) continuing to provide a useful couple hours of cigar information and entertainment each week.  We’re much indebted to both Bob and Dale in that respect, as well as their generosity and help in getting Half Ashed off the ground and running. We wanted to have them on the show as the first of an ongoing segment in which we bring in various industry people – bloggers, manufacturers, retailers, etc. – for some discussion about their ideas and views concerning the world of cigars.  We want to provide an outlet for them to candidly discuss and reveal the unique insights that they have into the industry and provide us with an education on the same.

Our cigar of the week for Episode 3 is the recently released Cuenca 5 Anniversary, which I reviewed a few weeks ago.  It was my idea to have this as the cigar of the week, as it has made such a grand impression on me.  It’s not secret that I love the cigar, and I wanted to share it with you all.  We also spend a great deal of time talking with Bob and Dale, getting their ideas on what is wrong with the cigar industry, what is right with it, and some of their preferences in cigars when they just want to enjoy a good smoke.  In news, we cover what we think the ramifications are with Swisher International having designs on creating a premium cigar division within their company, some antismoking legislation being proposed by a Florida state Senator, and what we’ve been smoking this week.  We also make a couple of corrections from last week’s show, brought to our attention some of you – notably, we misspoke about the arrangement of some local/state ordinances during the IPCPR tradeshow last year.  Thanks to George Edmonson of Stogie Guys for helping us out in that regard.  Also, I managed to talk a good deal about an upcoming Fuente cigar without ever telling you its name.  That cigar is the Casa Cuba.  Thanks to the many of you who made me aware of that.  I see at least some of you were paying attention :). 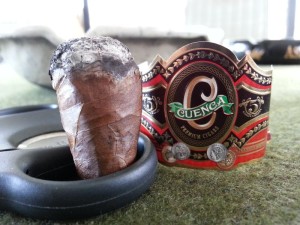 Unfortunately, we went very long this week and had to cut out a good deal of content we had planned on discussing.  Under normal circumstances, we try to hold the show below two hours, but we were having such a good time conversing with Bob and Dale we managed to go over the 2:30 mark.  So, we’ll have a few more news items next week – as well as some discussion from the world of pipes and tobaccos spurred on by an email and questions from Stephen D.  We’re looking forward to that, in addition to next week’s Cigar of the Week – our first Unknown/Unbanded cigar!    Remember, you can suggest an unbanded cigar for us via email at: [email protected]  That is a forwarding account that goes directly to my wife, who can source the cigars and provide them to us without information.  You can also send us cigars to smoke blindly by contacting me: [email protected] for an address to ship them.

As always, you can find the video on Cigar Federation, on our YouTube channel, or simply through the embed below.  You may also download the audio below or find us in the iTunes store (be sure to leave us a good review!) to subscribe directly to an audio feed of the show as it publishes.  Thanks for tuning in!