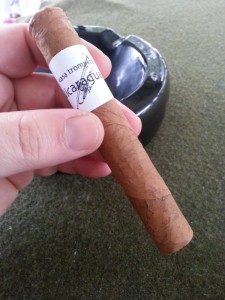 Good evening, everyone. As many of you already know, we recorded Episode 017 of Half Ashed Friday night, on which we had guest Michael Stewart to talk about his most interesting of hobbies – he buys whole leaf tobacco and blends/rolls his own cigars at home. Unfortunately, we experienced a number of technical difficulties both during and since the show. While recording, two of the three participants were booted from the Hangout a number of times with connectivity issues. While bothersome, we did manage to complete the show. However, due to some as-yet unknown YouTube fiasco, the recording is lost somewhere in the internet cosmos. Craig and I will be recording an abbreviated show during the week to announce the winner of our giveaway, as well as a few other pertinent items you will want to know about. We will be back next week with a full show as normal.  In the meantime, I have a couple of reviews lined up which I will take the opportunity to publish. The first is actually for one of Michael’s cigars that I had the opportunity to smoke recently. I have now been able to sample three of his blends, with the following review being the one I’ve enjoyed the most. So, without further ado, this is for Michael Stewart’s “Nicaragua.”  The vital stats on this cigar are as follows:  Dimensions:  Robusto; roughly 5″X50.  Wrapper: Ecuador Yellow Shade.  Binder: Ecuador Sumatran.  Filler: Nicaraguan seco, viso, & ligero. 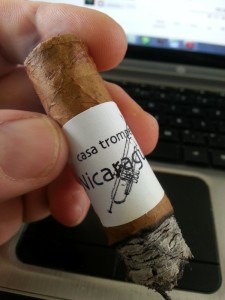 Aside from being a budding torcedor, Michael is also a jazz trumpeter, and has appropriately named his home-rolled sticks “Casa Trompeta.” The band is a nice touch, featuring a trumpet and apropos nomenclature. From all appearances, this cigar appears to be quite well made. The wrapper on this cigar does seem delicate, and telegraphs everything beneath. In all actuality, the ONLY criticism concerning construction I could even dream up is the extremely flat cap – which made it a bit tough to clip without cutting into the body of the cigar. If I’d had the presence of mind, I would have simply reached for a punch and made it a non-issue. Nonetheless, I did manage to get a good cut without removing too much and unraveling the cigar. Overall, I am quite impressed.

Before fire is applied, I get a faint aroma of tobacco and sweet hay from both the foot and wrapper. The cold draw provides more sweetness, and goldilocks resistance; not too firm, not too free. The early puffs give a noticeable nasal spice. This spice is very “bright,” with a faintly tannic finish. The flavor behind the spice carries the sweetness well, it “feels” only slightly tannic. Throughout the first inch, the burn is impeccable, remaining razor-straight and not requiring any touchup at all. 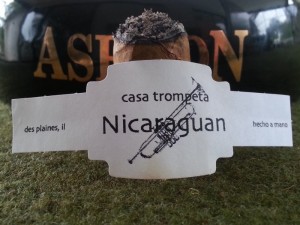 The midsection of the “Nicaragua” begins to transition into a more cedary profile, with the sweetness taking a backseat and fading significantly. I do notice that you must mind your cadence. Too aggressive a puff rate will turn it more toward a papery flavor palette. I slowed down et voilà! Back to normal.  Of course, this could be said of any cigar in the marketplace.
Going into the final inch or so of the cigar, the strength picks up a notch – but never becomes what I’d call strong. With less than an inch nub remaining, an ever-so-slight bit of tannic bitterness is the only indicator telling me it was ready to finish up. This was only barely perceptible, and never off-putting; It appeared only at the very end of the smoke, and acted as an early warning system that it was nearing its end.  I have to hand it to Michael, this cigar far exceeded my expectations for something blended and rolled by a layperson. So, kudos to him for a job well done. I don’t know if he has any ambition of ever turning his hobby into a money-making endeavor, but I know there are plenty of lesser cigars on the market selling every day. This was quite an enjoyable smoke, and one I’d be willing to buy off the shelf at my local tobacconist.

Once again, stay tuned for the abbreviated show (Episode 017b) this week, and come back for Episode 018 next week. We’ll be featuring the 2006 Partagas Serie du Connoisseur, one of Craig’s favorites. Also in the coming weeks, we’ll be taking a look at some of the fire-cured tobacco that is showing up in an increasing number of cigars as of late. Thanks for checking in, and we’ll see you next week!