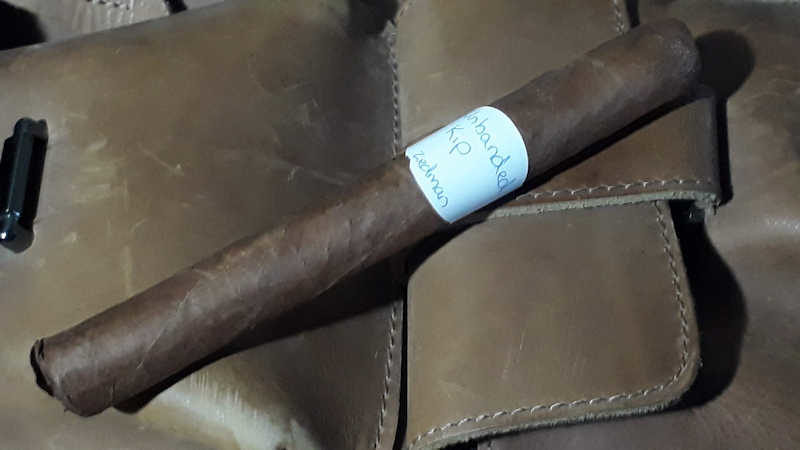 This week we’re smoking Unbanded 036 submitted by zedman.  I have to apologize for the fact that my audio was atrocious due to some unforeseen technical troubles.  Hopefully that will not persist, nor be too annoying for you.  Also of note, this week’s show is very different from most. We did not have a great deal of news to discuss from within the industry, so we took advantage of some time to simply hang out and talk about the cigar we’re smoking.  Speaking of which, here are our pre-smoke notes:

I’m measuring about 6” x 46/48ish, with very uniform medium brown coloration. The wrapper seems to telegraph every single detail underneath, which gives it a bit of a rustic appearance; it’s “slightly very” lumpy – the lumps are slight in magnitude, but prevalent in occurrence. There isn’t much in the way of aroma from either wrapper or foot. Also, as I’m sure zedman would point out if he were here on the show with us, we’ve had these for almost two years (Dec 2016?)….I do not know actual age since rolling.

My size is also 6×46 with a very spongy feel and slightly light weight in the hand. This telegraphs Cuban Custom rolled cigar from the appearance and color. The wrapper has the hallmark flavorful “look” but without the beauty that a top graded wrapper leaf would have. The look is akin to a wet wrapper application. It telegraphs the texture with a minutely different coloring or shadow. The foot is closed and the prelight seems greatly diminished, as if it’s been diluted over the years of being loose in a plastic bat.