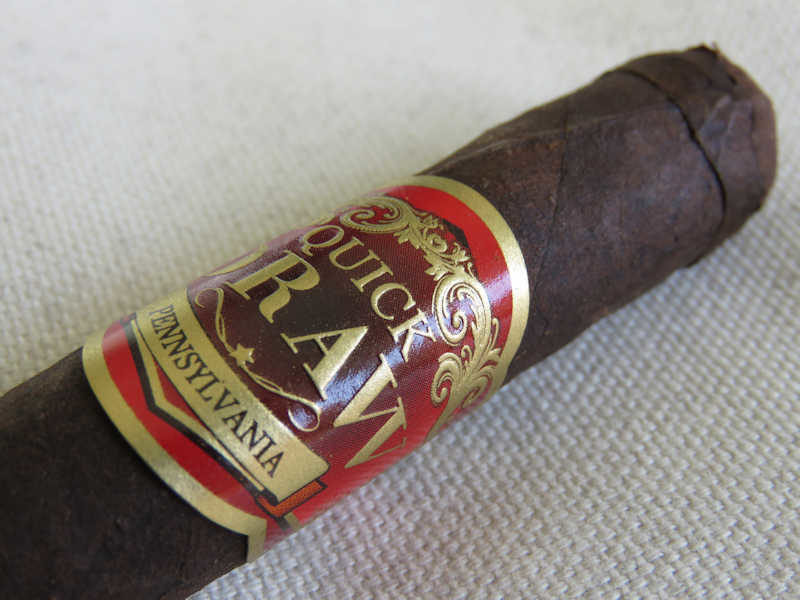 Tonight we’re smoking the Southern Draw Quickdraw PA with a Pennsylvania wrapper (also available with Ecuadoran Dark Habano or Ecuadoran CT). The binder is Nicaraguan, and filler composed of Nicaraguan and Honduran tobaccos. We have the Short Panatela, coming in at 5.5” x 40 – but the blend is also available as a 4.5” x 44 petit corona. These are about as fresh as can be, as I only ordered them about 4 months ago and had Mike bring them down. They are AJF-produced cigars, so although owner Robert Holt’s fingerprints are all over the blend you can still see AJ’s touch come through as well. Let’s see how the night progresses.

My old homeland continues to slide. The University of Tennessee is going tobacco free. Of course, it’s not a huge surprise that a university – especially a state school – would go smoke free. I’m only surprised by its depth. The ban prohibits “inhaling, exhaling, burning, or carrying any lighted cigar, cigarette (including any electronic cigarette or similar device), pipe, or other lighted tobacco product.” The prohibition extends to private vehicles parked – or operated – on university property. How exactly do they expect to enforce that? ORIGINAL STORY HERE

For those keeping score, Tatuaje is about to celebrate its 15th anniversary. Pete Johnson has been showing the Anniversary blend in development. According to his pictures and comments, the blend will come in two sizes: Belicoso Fino (5 1/2 x 52) and Torpedo Grande (6 1/2 x 52). Also revealed is that there will be two available wrappers: Ecuadorian rosado claro or Ecuadorian rosado oscuro. The cigars will be a regular production item (like the 10th Anniversary Belle Encre and Bon Chasseur vitolas).

We’ve talked about the process for ages, probably since before Half Ashed even existed – but more cigar companies are continuing to explore markets outside the U.S. Fratello recently announced an expansion with a new distributor in the German marketplace. Omar (de Frias) already has a few European arrangements, as do several others. I speculate that we’ll see this trend grow quickly as more companies seek to develop other markets to potentially fill in gaps that *may* develop should the American market drop off…kind of spreading eggs into multiple baskets. We’ll see I suppose.

There’s been *a little* bit of movement with the ongoing big-picture story of the FDA’s quest to regulate cigars. Our last show, we talked a bit about the fact that a new comment period and review had begun to investigate the definition of a premium cigar and the efficacy/value of FDA regulation. Since then, the CAA, CRA, and IPCPR have moved to try and delay the onset of warning label requirements. These are set to begin in August, and will be the first major expense for companies complying with the regs. The requested delay stems from the fact that a new review of the upcoming regulations and if/how/whether certain aspects should be carried out may mean that the requirements will change or be removed entirely. Should this be the case, the industry would have spent a huge amount of money on pointless compliance to unnecessary/voided requirements. About the same time, a group of healthcare related entities have sued the FDA because of existing delays that have come about through moving timelines and commencement dates for various parts of the rule (as we discuss, most of these groups bringing the suit already attempted to be deemed co-defendants, alleging that the FDA would not adequately fight for oversight of the entire industry).

This week, Kip has smoked almost nothing….but Craig has a special Padron to talk about.  Tune in for the whole scoop.