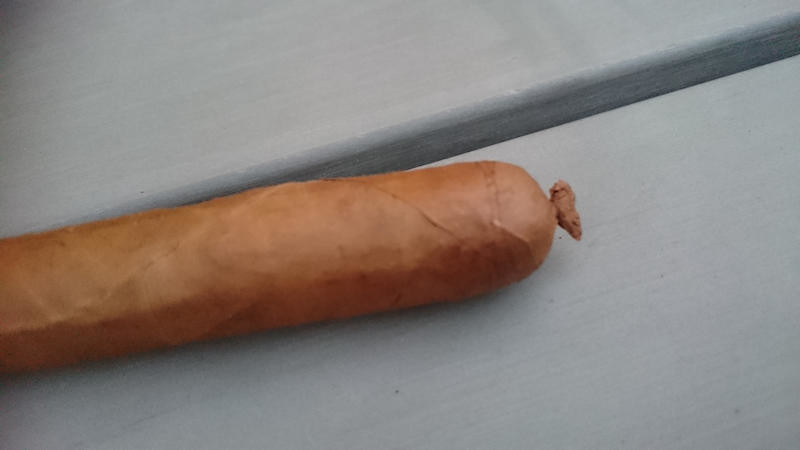 This Laguito #2 vitola, commonly known as the demi-lance around these parts but colloquially understood to be a 6”x38 rg, is a what’s commonly referred to as a “custom” cuban cigar.

Originally blended by the late Enrique Mons, this house blend for “Club Havana” is a brother of the commonly known “mons-dale”. Tonight’s examples were acquired in January of 2015 and are one of my favorite “customs” from the island. They are a wonderful mixture of brown sugar, sweet nutty flavors and at times a lovely mocha undertone.

EP Carrillo has shipped this year’s Short Run. It’s a new blend (Ecuadoran Habano over Nicaraguan internals), and it only comes in a single 6” x 52 vitola limited to 2,500 boxes of 10. The blend stands on its own, rather than being spun off another existing line like previous iterations. The most striking thing I noticed, however, is the price increase. MSRP this year is $12. Last year’s edition in this size was under $8…which makes for a greater than 50% increase. I realize it’s a more limited production run, and possibly better tobacco (although EPC hasn’t said anything to indicate what’s special in this year’s run, except for some Criollo ‘98 Comoto (Nicaragua) in the filler)…but I wonder why such a marked increase?

During the House Appropriations meeting, Repr. Rosa DeLauro (D-CT) proposed an amendment that would *remove* the existing language that protected premium cigars. This amendment failed at vote.

While this is all good news, it’s not over. A similar passage was in last year’s appropriations bill – but didn’t make it through the entire process.

* For general information, the included language qualifies a cigar as “premium” if:

Tatuaje’s Skinny Monsters have begun to arrive at retailers around the U.S. I never had much of a drive to seek out the Little or Pudgy Monsters, but I’m in for these 6” x 38 petit lances. We talked about these several months ago; this week’s initial launch is for 10,000, 10-ct samplers (1 each of the existing series) – but after this summer’s IPCPR tradeshow, there should be 400, 25 count boxes of each available. I can dig it. The samplers are running $80-85 from what I’ve seen in retailer adverts – which means you can try them all now and pick up your favorite in quantity later this year.

I think we mentioned a couple weeks ago that 1502 (Global Premium Cigars) had arranged for some limited distribution in the European market – following a few other, bigger brands over the past couple years. Now, Guayacan has joined the ranks. They announced an entrance into the Netherlands this past week. I’m still wondering what the base motivation for this phenomena is?  Is it simple growth by these companies into new markets?  Are some just hedging bets in case of legislative catastrophe in the U.S.?

A 6.5” 46 version of the Chogüí Dos77, called the Longsdale [sic] has shipped….and I still haven’t even tried it. I had an invite from Victor Nicolás to come by the “Top Secret Nest,” but haven’t had the chance with his recent travels and my schedule not working out. Based on my appreciation of the Rogusto, I gotta get my hands on these pronto. U.S. retail should run about $9.75 on these, and the blend is listed as being the same as the Rogusto (Dominican puro – with Havana seed wrapper over Criollo ‘98 binder and Habano 2020/corojo filler).

I expanded my Cuban sampling a bit recently, with the Hoyo de Monterrey Añejados. I honestly think I like most every other HdM I’ve tried more than these. The profile had a woodsy core that dabbled with a touch of bitterness at times. This one wasn’t worth the extra expense that came with it for my tastes.

Edouardo de Lara (El Compartir) launched a small batch of cigars locally called the Yute. The packaging is interesting, with both the band and bundle wrap being jute (the burlap material used to wrap tobacco bales). I think I actually liked these better than his original El Compartir line. They are very clean on the palate, with a bit of bright, sweet spice throughout. The price was a huge appeal as well, coming in at 156 Dominican pesos (~$3.46US) before tax. One other interesting – but perhaps controversial to some – feature is that the cigars are cut flush at the head, with a simple leaf applied over it. This necessitates either using a punch or fingernail to open the end. I don’t know that I felt one way or the other about this…I just smoke these things. It was a conversation starter, but not much more for me. I dig ‘em. So much that after trying one I committed to a bundle. The only problem is the size of the run. Only 1,000 were produced. Comes with HVA (Habana Vuelto Abajo) wrapper (Dominican) over Criollo ‘98/Habana 2020 filler.

Tune in toward the end of the show for a minor “crotchety old guy” rant that I had recently about how the manufacturer/distributor/authorized/non-authorized retailer system sits today.  Despite differing thoughts from both Craig and Will Cooper, I’m still of the same mind as when I went into the conversation (even though I can agree with some of their points, I think the exceptions are just that – exceptions.  Not the rule).

Next episode (144), we will be smoking an Unbanded – #027, from Dan C.  So come by Friday night and hang out with us in the chatroom during the show.  If you would like to contact us in the meantime, you can reach us via the Contact Page or the following emails: [email protected] or [email protected]  Please feel free to drop us a line if you have any questions you’d like answered, comments to make…or even compliments and complaints.  We love to get your emails!  Also, remember you can always go back and listen to previous episodes, which can be found in the Half Ashed Archive.  You can download this week’s audio directly below (right-click “Download” and save), find us on iTunes, or subscribe with any podcast app at our RSS Feed.  Video, as always, will be available at the Half Ashed YouTube Channel.