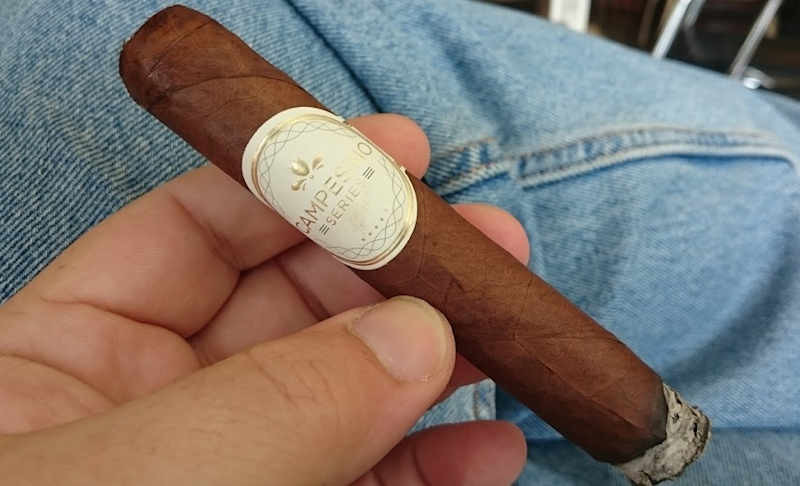 Another of the DR-based small batch lines I’ve talked about in recent months (Chogui, CDR, El Compartir, etc.), the Campesino Series by Tabacalera 1844 is tonight’s featured Cigar of the Week.  The line is owned by Edgar Sued, proprietor of a cigar shop by the same name in Cabarete, DR.  It’s produced by the same unnamed factory in Tamboril that manufactures the Chogui, and is a Dominican puro (Havana Vuelto Abajo wrapper over DR filler/binder).  Personally, I find them to be more akin to what I envision as a traditional Dominican cigar than others, like Chogui.  It has more sedate flavors with a touch of sweetness that never overwhelms the blend but adds a nice accompaniment.  I’ve smoked both the robusto and toro, and now tend to prefer the toro for some intangible reason.  Let’s see how tonight goes….

Crowned Heads’ Famous Smoke Shop exclusive the Black Belt Buckle has expanded.  Originally slated for a 10,000 stick run of corona gordas, they have added 2 sizes (6”x54 Sublime and 5”x50 Robusto).  It will be an ongoing project, and retail for $8-$9).  The line is an adaptation of the Four Kicks, but with a Connecticut Broadleaf wrapper.

Congrats to Cigar Aficionado’s latest inductees to their Hall of Fame – Litto Gomez, Jorge Padrón, and Rocky Patel – bringing the total number of inductees to 18.

The guys at Ezra Zion released a follow-up maduro version of the All My Exes line.  This version has a couple of minor blend tweaks, with the most significant being the addition of a San Andres wrapper (vs. the original Ecuadoran Habano).  Total production is 800 boxes of 25 in three sizes – Toro, Lancero, and Robusto.  Pricing is set at $8.50-$9, based on size.  The cigars are made by Noel Rojas at his Tabacalera Aroma de Jalapa.

In the continuing legacy of Smoke Inn’s Microblend Series, Davidoff will be producing the 13th iteration of the line.  It’s a celebration of Smoke Inn’s 20th Anniversary, and will feature an Ecuadoran Connecticut wrapper over Dominican internal components.  Pricing is set at $19.95 per stick, and should start shipping in about 3 weeks.  Total production is 300 boxes of 10.

House blend cigar for The Cigar Lounge – I’ve discussed my take on house blend cigars before and this one is a perfect example of what I believe in: putting your name on something you stand behind. FYI, Casa Fernandez can learn a thing or two here. This is what their cigars should be :)

San Cristobal de la Habana El Principe- ~4.25” x 42.  I really enjoyed this, even though one of the two I had was a bit tight and gave me fits.  Lots of mild (almost faint) floral flavors, tempered with some cacao/dark chocolate.

Nestor Miranda SS Regional Exclusivo – I revisited this after forgetting about them for a couple years.  They’re definitely not over-the-hill, but the flavors were far more muted.  And, while the strength was still in the medium range it seemed a bit lighter than I remember as well.  Bold milk chocolate and mild spice.  Good stuff…wish I had more.

CDR (Christian del Rosario de la Rocha) – This is one of the Dominican lines that I’ve recently been exploring.  The flavors were very good – they seem more spicy than most, a bit like a more approachable version of some My Father blends – but my only example to go on struggled with the burn for the first couple inches.  It wanted to tunnel and the wrapper/binder were resistant to combustion.  I persisted, and it finally came around.  It was worth another try, though.  I’ll report back whenever I get around to it.

Next episode (143), we will be smoking the Club Havana Coronas Especiale.  So come by Friday night and hang out with us in the chatroom during the show.  If you would like to contact us in the meantime, you can reach us via the Contact Page or the following emails: [email protected] or [email protected]  Please feel free to drop us a line if you have any questions you’d like answered, comments to make…or even compliments and complaints.  We love to get your emails!  Also, remember you can always go back and listen to previous episodes, which can be found in the Half Ashed Archive.  You can download this week’s audio directly below (right-click “Download” and save), find us on iTunes, or subscribe with any podcast app at our RSS Feed.  Video, as always, will be available at the Half Ashed YouTube Channel.