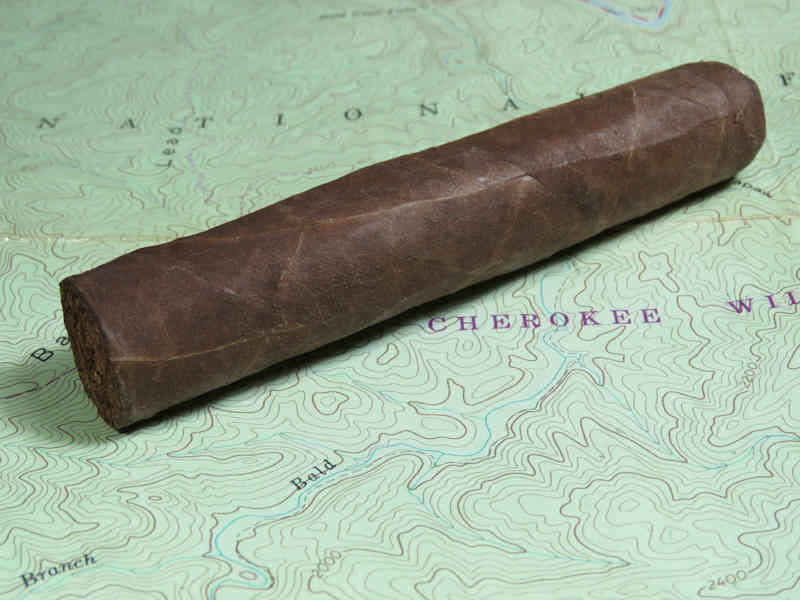 NOTE: Image is a sample image only; not this week’s cigar…my apologies, but the original image was lost in the shuffle.  Description: Roughly a 5”x44rg heavily box pressed cigar with a beautiful even colorado wrapper. Possibly even a half shade darker. Smooth veins and an even overall texture make this an absolutely gorgeous cigar with near perfect appearing construction. The prelight aroma is slightly tingly with a touch of a cheesy funk. Normally I’d raise my eyebrows to the smell but something about it works here. It’s more reminiscent of a typical cigar barnyard funk than anything off-putting.

The American from JC Newman launched today. They’ve been talking about this cigar for quite a while. It’s interesting in that they’re marketing it as the first *fully* American cigar – which means not just wrapper, binder & filler; even the boxes, packaging, cellophane, and molds were made in the USA. Manufacturing is at JC Newman’s El Reloj factory in Tampa as well. The wrapper actually comes from the Florida Sun Grown being grown in Clermont, FL at the Jeff Borysiewicz (Corona Cigars) farm, which was also the source of some Drew Estate projects (FSG, for example). The wrapper is a CT broadleaf, from CT. FInally, the filler is a mix that includes more CT tobacco, as well as some Mennonite-grown Pennsylvanian tobacco. It will come in four sizes at launch, and will be available on some limited basis through Corona Cigars.

Black Label Trading, who previously ‘merged’ with Emilio and took over production and marketing for the company, has announced a revamp of the AF1 and AF2 marcas. The AF1 will have a Mexican wrapper over Nicaraguan binder and filler, while the AF2 will have an Ecuadoran wrapper over similar mix. Both lines will comes in Robusto (5”x50), Toro (6”x50), and Grand Toro (6”x58), but the AF2 will additionally be available in a 5.5”x42 Corona. The line will retail from $8.50 to $10 per cigar. Just on a side note, I (Kip) could wax poetic about the original blends from back in Gary Griffith’s days with the company. These two lines were some of the cigars that sent me headlong into my time of fascination with “boutique” cigars. I thought both were great; the AF2 was spectacular for my tastes. They were made by AJ Fernandez – hence the “AF” moniker. I have to wonder in light of the current owners’ production being elsewhere…and having changed up the blend….and packaging, why are they keeping the same name? The press release for these new ones say they’ve received “the Oveja Negra makeover in appearance and flavor”. Why not a new name?