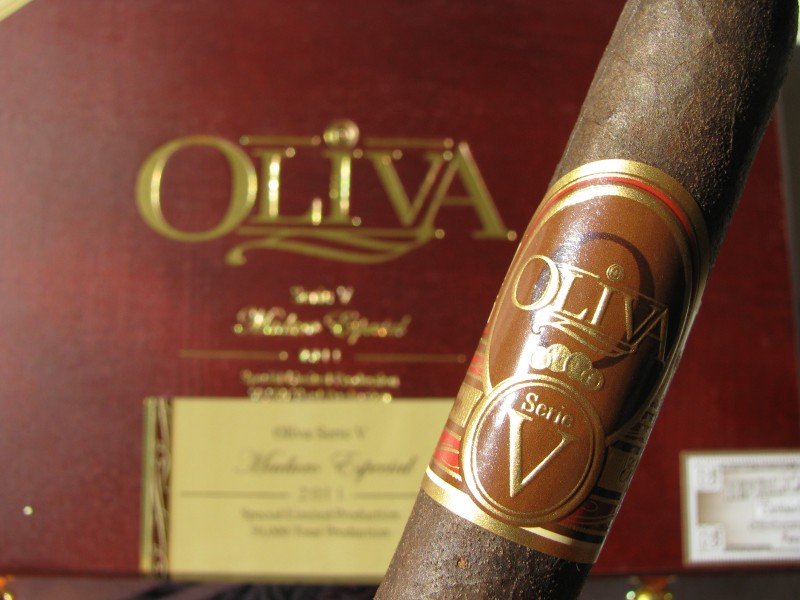 Craig – 2015 Davidoff Nicaragua Diadema – I had been taking this cigar with me to Colorado for the past three summers and finally decided that I wasn’t going to wait around for the 4th failed attempt to smoke it in the mountains. An old deceased friend always said that he would mortgage his house for more “original” Davidoff Diadema’s. Just this week I got an email that they’re being sold again. In his honor and since I have none of those 14 year old cigars, I’d smoke the closest thing I had, this Nicaragua celebrating the same vitola name. It’s nutty and full of zing and is slightly overmatching my out-of-practice palate. I’m coming off of a spring cold and it has severely diminished my tasting ability. This cigar is one of the best things I’ve consumed in nearly a month; and I’m only an inch in…

Kip – 2008 Oliva Serie V Maduro revisited. I bought an unopened box of 10 of these from last year’s sale via Craig. I was such a *huge* fan of them originally and at every step of the way until I ran out, that I wanted to see how they’re doing 10+ years on. The 2008 was a 6.5”x52 beli that had a CT broadleaf wrapper over NIcaraguan binder/filler. Interestingly enough, CA reported a story on this line just this afternoon….In the way of preliminary notes, here are my thoughts. Tune in to the show to see how it ended!

Cold draw is quite a bit more ‘raisiny’ than I remember; aroma pretty barnyardish. First light does *not* say 10 years of age. It initially feels aggressive and bold through the nose. It doesn’t taste young per se; it is tempered by a leathery flavor that adds a dimension to what I remember in the past. It is just still more bold than I would expect, even having smoked one of this box already a month or so ago.

The FDA lost the one case we’d like to see them win….