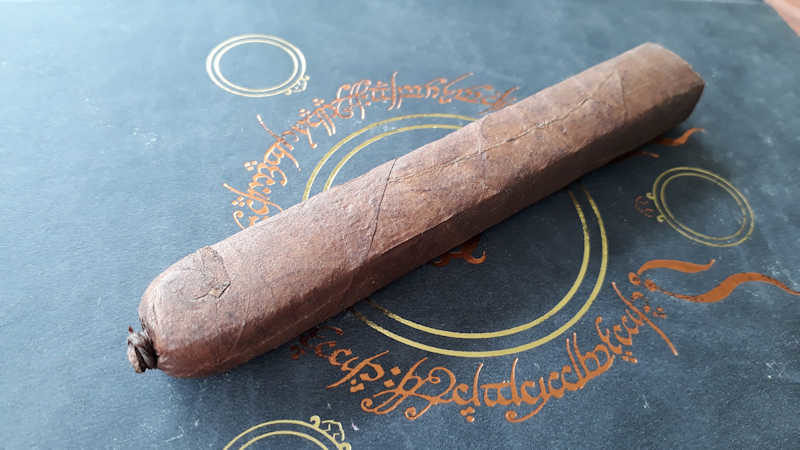 Precious little pre-smoke detail as always on our Unbandeds. This one is roughly 4-¾”x(34/47; somewhat pressed ) and has a true to life pig tail. Let’s see how it goes….

The CRA added a tool to its approach, or at least renewed one. They’ve sent a letter to every sitting state governor detailing the potential impact of FDA over-regulation of premium cigars.  The letter doesn’t share any new information, but points out the possible loss of jobs and tax revenues, which are important issues on a state level. The letter also makes clear a couple of differences between premium cigars and other items such as cigarettes (namely, that the cigars at hand aren’t highly sought after by underage smokers, etc.), and asks the governors to throw their influence behind legislation that would exempt premium cigars from even more regulation.

A couple weeks ago, it was announced that TMA (Tobacco Merchants Association) has completed an acquisition of SpecComm International, Inc. – parent company of several tobacco related trade magazines, including Pipes & Tobacco, Cigars & Leisure, and Tobacco. The press release didn’t provide great detail about future plans for the content, only that these along with their other media holdings will be rolling out in a new division and that “TMA will create a tobacco and nicotine content experience for industry and all stakeholders that has more depth and coverage than anywhere else. And watch for new topical content coming soon”.  They organization more than two dozen outlets in total. This afternoon, halfwheel is reporting that they have sources reporting that the three above-mentioned magazines will be shuttered. As of yet, TMA has not responded to their request for confirmation. Original story here

Hawaii, which has a history of being at the forefront of tobacco control legislation, has a couple of new/renewed proposals. First, there is a new introduction of a bill that would prohibit mail-order or internet sales of cigars and OTP into the state. This has been unsuccessfully proposed in the past. It is already illegal to conduct sales of cigarettes via these methods on a federal level, so this is specifically targeted at cigars and other tobacco products. The bill also includes a twelve-fold increase on the annual tobacco permit fee.  Secondly, USAToday and numerous other outlets report that State Rep Richard Creagan has proposed what essentially amounts to a phased prohibition on cigarettes as a whole. The bill would raise the cigarette age requirement to 30 next year, 40 in 2021, 50 in 2022, and 100 in 2024. This bill would exempt cigars and OTP and is specifically targeted at cigarettes. It will be in committee for debate in the coming days. Hawaii was the first state to raise the purchase age to 21, and has been followed by several other states in that regard. While lawmakers have said the bill is likely too abrupt to pass this time around, others have asserted it is time to start thinking about an “end-game strategy” for smoking because the number of smokers has dwindled low enough that smokers don’t have the same power or voice as in the past.

Big Sale is now Public! – The sale (personal sale from a friend who is clearing his collection) we’ve referenced multiple times before will now be available to anyone. Interested? Come to Halfashed .com/forum