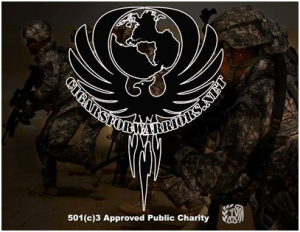 For Immediate Release December 11, 2013 – Florida- Representatives from Operation: Cigars For Warriors are happy to announce today that they have officially obtained their 501(c)3 status from the Federal Government. The nonprofit organization is dedicated to sending premium cigars and cigar accessories to U.S. service members serving in combat zones and long-term deployments across the globe. To date they have sent over 100,000 cigars to military units around the world since 2012. What started out as a grassroots effort to honor troops is now an official nonprofit with dozens of volunteers and hundreds of donors working toward a shared mission.

Ben Edmundson, the Treasurer for Operation: Cigars For Warriors made the announcement today for what can clearly been viewed as the exciting next chapter in this nonprofit’s story. The organization continues to gain momentum across the country. “Finally obtaining our 501(c)3 federal charity status is the culmination of what we promised the public on day one,” Board Chairman Storm Boen said from his home in Texas. “We are an above the board and professional organization. This is going to be something that will help us take it to the next level.” Boen continued.

Operation: Cigars For Warriors relies on a nation-wide network of volunteers to facilitate the collection of donated cigars from collection points from California to New York. The cigars make their way to a Florida distribution point to be packaged and mailed to fulfill screened requests. Soldiers can request cigars through the website, www.cigarsforwarriors.org. Ben Edmundson is the Treasurer for the nonprofit and he knows that this will allow the organization to accept bequests, transfers, and financial gifts. “Day to day not much is going to change in how we operate,” Edmundson said as he worked to run the daily operations of the nonprofit. “We will still work hard every day to serve the soldiers, but this open doors for donations from companies and individuals that had been previously been closed to us.”