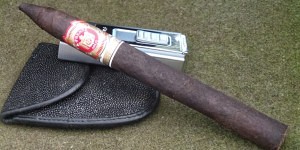 [NOTE: As with all early iterations of a cigar, some blend changes may occur before final release. This review is subject to revision after the vitola hits the market.  Also check out Half Ashed Episode 140, when the 888 was our featured Cigar of the Week.]

Earlier this year, at the CFC gathering in the Dominican Republic, a peculiar Añejo vitola was nonchalantly distributed to attendees (myself included).  Essentially no information was given, except vague rumblings from a staff member that it was using the project name “88” or “888” (not necessarily the final name), and was scheduled to ship between then (Feb 2014) and December.  In the past week, articles have popped up throughout online cigar media of its imminent delivery in September.  So, I thought I’d share my thoughts about the cigar today.

The wrapper, from all appearances, is CT Broadleaf like all the other Añejo.  I received no details about the internal components, and won’t speculate until I have something more firm….which is rare, as the Fuentes’ like to keep blend components close to the vest.  It is incredibly dark in color, and slightly rustic with pronounced veining as would be expected.  Dimensions are roughly 6 5/8″ x 44 – including the long, tapered head.  MSRP has not been released as of yet – for review purposes, I estimated pricing based on typical Añejo pricing in the Tampa market.

Before lighting, the draw resistance is near perfect with only a slight clip of the pencil point head.  I chose to leave about a 1/4″ opening, knowing that I could cut more off needed.  Cold flavor is savory and dark.  As for aroma, very little is perceptible from the wrapper, but a bold sweetness with slight cedar note is present at the foot.

The initial puffs from this stick were surprisingly spicy; not something I expect from an Añejo.  The flavor is very savory – literally causing a salivary response.   In the first third of the cigar, the balance is exceptional, walking a delicate tightwire between strength and flavor.  I’d put the strength at a heavy medium/light full, and flavor intensity about the same.  The flavors are not the rich cocoa and chocolate I am accustomed to with Añejo, but a bit more “bright.”  The cigar is warmer to the touch than normal, with the heat being felt nearly 3/4″ behind the burnline – although the burnline is quite straight, never wandering much. 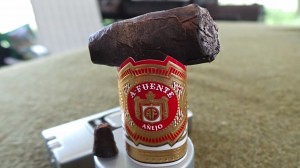 Into the midsection, the 88x? becomes a little more recognizable as an Añejo.  It develops more of the dark sweet, cocoa that is often prevalent in the line.  I’m thankful I kept the opening at about 1/4″, as I believe cutting it much further down the head could have led to some overheating and flavor loss.  Burn is still very good, with only mild scalloping around its perimeter.

The final stretch shows lots of promise, with an amplification of both flavor and strength (but not too much strength for an admitted nicotine wimp like myself).  The burn did wander more during this time than earlier, but continued to self-correct.  The flavors maintained the sweetness, but were tempered with solid cedar presence.  The interplay was very entertaining.